On 5 June 2015, a DHC8-200 descending towards Bradley experienced an in-flight fire which originated at a windshield terminal block. Attempts to extinguish the fire were unsuccessful with the electrical power still selected to the circuit. However, the fire eventually stopped and only smoke remained. An emergency evacuation was carried out after landing. The Investigation was unable to establish the way in which the malfunction that caused the fire arose but noted the continuing occurrence of similar events on the aircraft type and five Safety Recommendations were made to Bombardier to address the continuing risk.

On 5 June 2015, a Bombardier DHC8-200 (N363PH) being operated for United Express by CommutAir on a scheduled domestic passenger flight from Newark, NJ to Bradley International (Windsor Locks), CT as CA 4776 experienced a sudden fire in descent in day VMC. The fire followed arcing in the right hand windshield block. An emergency was declared and both pilots donned their crew oxygen masks. Discharge of a fire extinguisher twice failed to control the fire. Although it eventually stopped, a lot of residual smoke remained in the flight deck. After a normal landing, the aircraft cleared the runway. The crew shut down both engines and the emergency evacuation was completed in approximately 30 seconds with no injuries. The AFS found no signs of continued fire.

It was established that the event had begun with a sudden noise described as a ‘pop’ and arcing at the top of the right hand windscreen in the vicinity of the windshield heating electrical terminal block. Almost immediately, it was reported that a "torch like fire occurred at the terminals making a loud hissing sound." Both pilots donned their oxygen masks and the Captain declared an emergency. The First Officer then transferred control to the Captain and discharged a fire extinguisher on the terminal block. The fire was reported to have then ceased momentarily but the arcing continued and the fire re-ignited. The First Officer discharged the extinguisher for a second time and it again momentarily extinguished the fire but again it flared back up and continued for an unreported amount of time. The fire subsequently ceased but a considerable amount of smoke was still being produced. The Cabin Crew was pre-briefed that an emergency evacuation would be carried out after landing once the engines had been shut down and the propellers had stopped rotating. The remainder of the flight and the landing were completed without further incident and the emergency evacuation was accomplished in approximately 30 seconds with no injuries to crew or passengers. The AFS responded and confirmed there was no continued fire.

The right windshield was found to have sustained "burning and charring damage in the area of the terminal block" and the inner glass ply was fractured. Some burning and charring damage to the interior trim adjacent to the forward upper edge of the windshield was also evident. It was found that the windshield involved had been fitted to the aircraft at build more than 17 years previously. This was noted to far exceed the average life of 8.2 years reported by the windshield manufacturer. There were what were regarded as "typical signs of aging with ample evidence of moisture ingress into the laminate around the edges of the windshield" but these were within the published limits and it was concluded that they had not contributed to the failure. The fire damage and a melted power wire precluded determining if there had been any pre-existing damage to the power wire prior to the incident or identify any other root cause of failure.

Examination of maintenance records confirmed that the Operator was in compliance with all recommended inspections specified by Bombardier and the most recent inspection occurred more than 2 years and 3,500 flight hours prior to the incident with no findings. It was noted that in the CMM, windshield manufacturer PPG "recommends inspection of the windshields at intervals significantly less than (the aircraft manufacturer)" and this was considered a matter of concern by the Investigation. 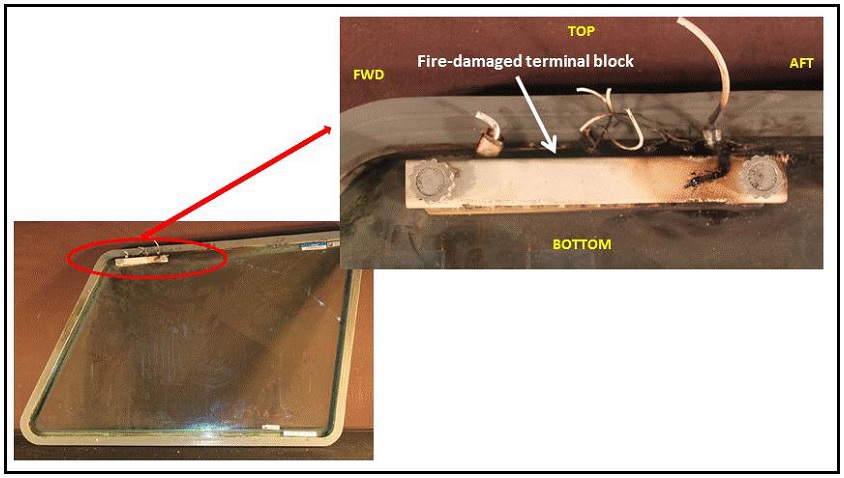 A search of all available data sources yielded 94 similar events since 2000 which had involved arcing, smoke, fire, or overheating at the windshield terminal block locations on other DHC-8-100/200/300/400 aircraft. Only one of these, a 2009 event involving the arcing failure of one of the power wires near the terminal block on a windshield installed in a DHC-8-300 aircraft was the subject of an independent safety investigation, which was carried out by the Canadian TSB. This investigation had also been unable to determine a root cause due to the effects of fire damage but noted that the fire had ceased as soon as the crew had switched off the windshield heat. Following this event, it was noted that DHC-8 maintenance schedule was amended to include a torque check of the windshield terminal block connections at each C-check (10,000 flying hours).

The Investigation noted that the current design of DHC8 windshields "provides for connection of the windshield heat power wires to the terminal block using a ring terminal, screw, and lock washer". It considered that "these screw connections are susceptible to cross-threading, improper torque, loosening over time due to vibration, and incorrect hardware usage, all of which can lead to arcing at the terminal block" and that “where the cause of the arcing, smoke, or fire could be determined, many of the 94 reports found during (this) Investigation cited a loose connection at the terminal block or incorrectly installed/missing hardware". It was further noted that after some similar arcing events on the Boeing 757 in 2004, Boeing had "redesigned the corresponding terminal block on their aircraft to incorporate a pin/socket connector, instead of a screw to connect the airplane electrical system to the windshield heat system".

It was formally concluded that the Probable Cause of the fire was "the arcing failure of the windshield heat power wire on the right windshield due to unknown reasons".

A Contributory Factor to the severity of the fire was "the lack of training or guidance provided to the crew for selecting the windshield heat to off that would cut power to the circuit".

On 11 March 2016, 5 Safety Recommendations were made as a result of the Findings of the Investigation as follows:

The Final Report of the Investigation was adopted on 12 January 2016. The subsequent Safety Recommendations Report was adopted on 11 March 2016 and includes a summary of the background and analysis which led to them.