On 2 March 2017, a DHC8-200 took off from Kangerlussuaq in normal day visibility without clearance and almost immediately overflew three snow clearance vehicles on the runway. The Investigation identified a number of likely contributory factors including a one hour departure delay which the crew were keen to reduce in order to remain within their maximum allowable duty period and their inability to initially see the vehicles because of the runway down slope. No evidence of crew fatigue was found; it was noted that the vehicles involved had been in contact with TWR on a separate frequency using the local language.

On 2 March 2017, a Bombardier DHC8-200 (OY-GRO) being operated by Air Greenland on a scheduled domestic passenger flight from Kangerlussuaq to Sisimut departed from an active runway in day VMC without having received a take-off clearance and was just able to clear three snow clearing vehicles which the crew sighted ahead during their take-off roll.

An Investigation into this Serious Incident was carried out by the Danish Accident Investigation Board. Data from the QAR was retrieved but relevant data from the SSCVR had been overwritten by the time the event was reported to the Board by Kangerlussuaq ATC a little under 2 hours after it had occurred.

The 47 year-old Captain had 14,800 hours total flying experience; the experience on type was not stated. The 44 year-old First Officer had 3,494 hours total flying experience which included 2,681 hours on the aircraft type involved. The investigated event occurred during a seven sector rostered flight duty; the position of the investigated flight in that sequence was not stated but an investigation as to whether fatigue may have been a factor in the performance of either pilot found no evidence of this. 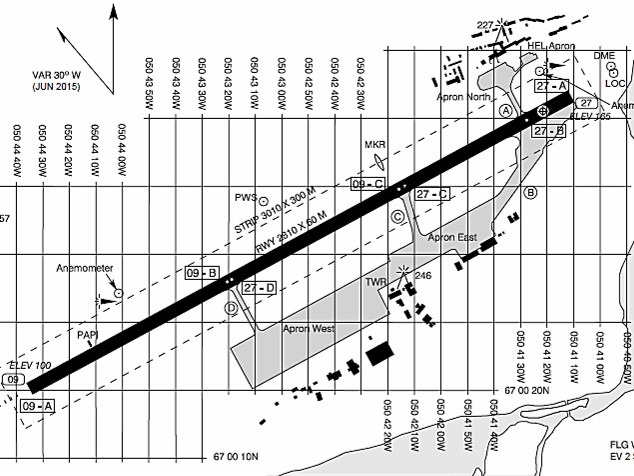 Part of the AIP Aerodrome Chart showing the runway/taxiway layout. [Reproduced from the full chart included in the Official Report]

It was established that after clearance to line up on runway 27 ready for departure, the departing aircraft had read this clearance back and then taxied from the apron via taxiway 'A' onto the runway. A take-off clearance was not given as the TWR, where a trainee controller was in position and being overseen by an OJTI, had, in anticipation of the departure of the DHC8, instructed three vehicles involved in snow clearance on the runway to vacate via taxiway 'D' using "the local FM channel" and communicating in the local language. This local frequency was not promulgated in the AIP.

Just seven seconds after arriving as cleared in the 27 take-off position at taxiway 'A' and after the crew had "been in doubt whether or not a take-off clearance had been issued but (had) agreed that the aircraft was cleared for take-off", the aircraft began its take-off roll. An ASDA/TODA of 2579 metres was available from that point and the aircraft was operating at significantly below its permitted MTOM. The crew had no visual contact with the vehicles because they were located on the western end of the runway where the last 923 metres, beginning just beyond taxiway 'D', slopes down to a threshold elevation which is 65 feet lower than the opposite end of the runway (see the runway longitudinal profile below). It is not made clear whether the crew subsequently did sight any of the vehicles later in the take-off roll.

The longitudinal profile of Runway 27. [Reproduced from the Official Report] 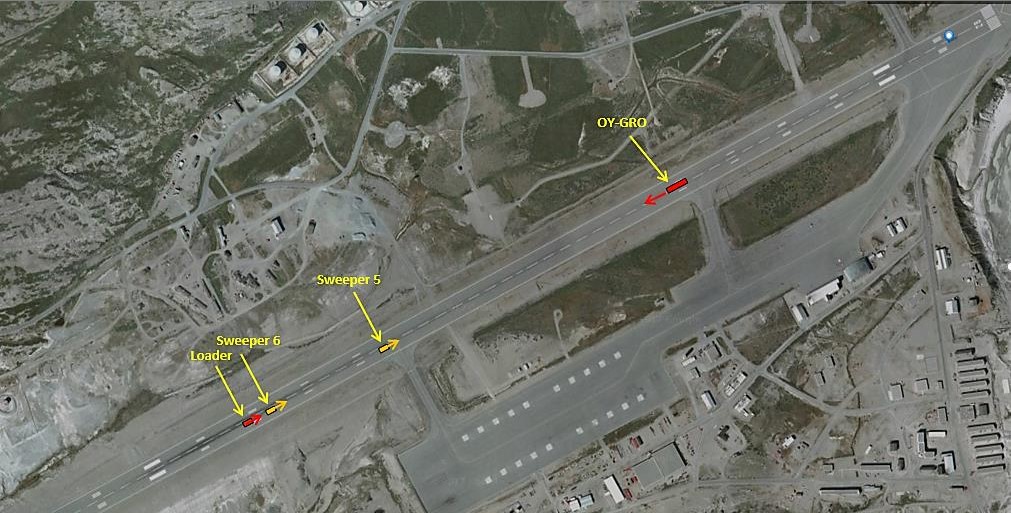 The relative positions of the aircraft and the three vehicles during the aircraft's take-off roll. [Reproduced from the Official Report]

It was noted that as it taxied out, the aircraft was running about an hour behind schedule and the Investigation considered that a relevant context for the imminent departure could have been that the flight crew were "eagerly trying to catch up on time in order not to exceed their maximum daily duty period of 10:30 hours (seven sectors)" and that, this "might have mentally provoked them to act from their expectations rather than the factual reality".

It was considered that the following "human factor topics (had) most likely affected the flight crew mutual communication and decision making process and led to the take-off from an engaged runway":

The Investigation also considered the absence of what were described as "soft safety barriers" including:

The Conclusion of the Investigation was that the aircraft "departed from an engaged runway at Kangerlussuaq without an ATC clearance".

Four Contributory Factors were identified as having "influenced the sequence of events" as follows:

Relevant Safety Action taken by the aircraft operator in response to the event during the Investigation was noted to have included the following:

The Final Report was published on 11 May 2017. The Board did not issue any Safety Recommendations "because the Investigation did not reveal systemic flight safety lapses".