On 1 December 2013, a small aircraft taxing for departure at night was cleared to cross an active runway and did so as a DHC8 was taking off from the same runway. Separation was significant and there was no actual risk of collision. The Investigation found that the GND controller had issued clearance to the taxiing aircraft when he had responsibility for its whole taxi route but had neither updated the aircraft status system nor directly advised of the taxiing aircraft when passing responsibility for part of its cleared route to the TWR controller who therefore remained unaware of it.

On 1 December 2013, a Piaggio 180 (C-GFOX) taxiing for departure at Ottawa from the Police Apron there at night in normal ground visibility crossed an active runway ahead of a Bombardier DHC8-300 (C-GEWQ) being operated by Jazz Aviation which was taking off on a scheduled passenger flight from Ottawa to Montréal as JZA 988. Neither of the aircraft flight crews were aware of the runway incursion, and both aircraft continued their respective departures without further event.

The occurrence was investigated by the Canadian Transportation Safety Board (TSB). It was determined that although the temperature was sub-zero and light snow had been falling, the prevailing weather conditions were not relevant. The necessary factual data were obtained from ATC recordings.

It was established that the GND controller had cleared the P-180 to taxi from the Royal Canadian Mounted Police (RCMP) Apron behind the terminal to hold short of runway 07 on a route via taxiways G, B and C with a crossing of runway 14/32 explicitly included (see the annotated taxi chart below). This clearance was accompanied by an instruction to contact TWR once at the runway 07 holding point. 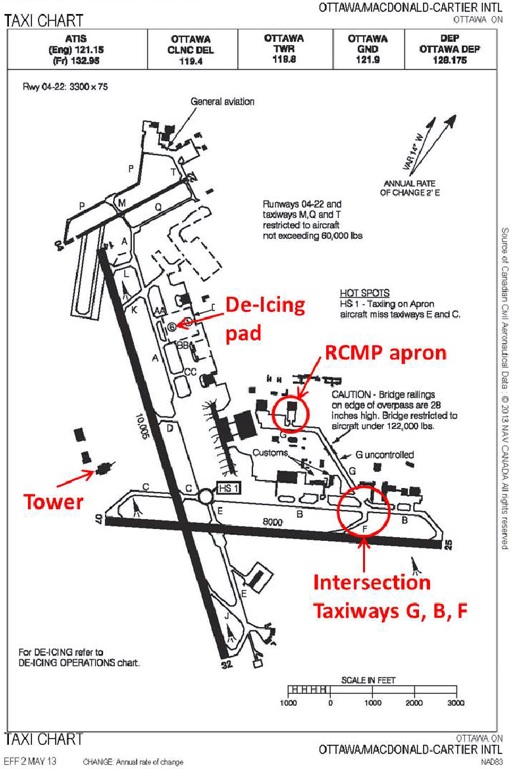 One minute after this, the same controller had, in accordance with normal practice for departing aircraft leaving the remote de-icing pad when, as in this case, runway 07 was the active runway, offered the DHC8 a departure from runway 14 in order to minimise taxi time. The DHC8 crew had accepted the offer and had been cleared by the GND controller to taxi from the de-icing pad via taxiways A and L to runway 14 and instructed to change to TWR once holding short of the runway on L. One minute after this, coordination between the GND and TWR controllers was completed for the "exchange of responsibility for runway 14" in order to allow its use by the departing DHC8 and the TWR controller took over that responsibility. He "completed a scan of the airport manoeuvring area and the Extended Computer Display System (EXCDS)" and saw that an aircraft (the P-180) was approaching Taxiway C which crossed runway 14 but "as there was no indication on the EXCDS display screen that an aircraft was taxiing for a runway" he assumed that it was en route to the de-icing pad. He then cleared the DHC8 for take-off on runway 14. By the time the aircraft had entered the runway, commenced its take-off and was accelerating through about 60 knots, the P-180 was midway across Runway 14 and the two aircraft were approximately 1,340 metres apart (see the illustration below).

The GND controller "noticed the runway incursion and estimated that (the P-180) would be clear of the runway by the time (the DHC8) reached (it)” and so no call was made for the DHC8 to reject its take-off. The DHC8 flight crew did not see the P-180, a small and relatively inconspicuous aircraft, cross the runway in front of them but they were "able to see past the intersection of runway 14 and taxiway C and had noted an aircraft landing on runway 07 just before they were cleared for take-off". Following the occurrence the GND controller was routinely suspended and the TWR controller was left alone to provide all ATC service for 40 minutes until a second controller arrived to assist. 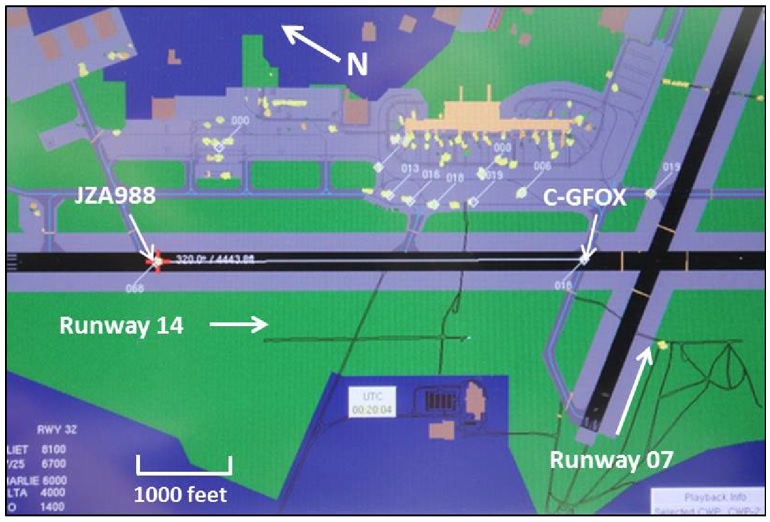 Safety Action taken by ANSP NAV CANADA as a result of the occurrence was noted to have included a review of its procedures for operating when short-staffed and the issue of a "Tower Operations Directive" at Ottawa which was subject to a mandatory verbal briefing. This introduced more effective use of the EXCDS when runway crossings are included in clearances.

The Final Report of the Investigation was authorised for release on 10 June 2015 and it was officially released on 16 July 2015. No Safety Recommendations were made.