On 10 May 2019, a Bombardier DHC8-300 taxiing in at Toronto at night was hit by a fuel tanker travelling at “approximately 25 mph” which failed to give way where a designated roadway crossed a taxiway causing direct crew and indirect passenger injuries and substantial damage. The Investigation attributed the collision to the vehicle driver’s limited field of vision in the direction of the aircraft coming and lack of action to compensate for this, noting the need for more effective driver vigilance with respect to aircraft right of way rules when crossing taxiways. The aircraft was declared beyond economic repair.

On 10 May 2019, a Bombardier DHC8-300, (C-FJXZ) being operated by Jazz Aviation on a scheduled domestic passenger flight on behalf of Air Canada from Toronto to Sudbury as JZA 8615 had just landed back at Toronto after being unable to land at Sudbury due to adverse weather conditions and was following taxi clearance when a fuel tanker being operated by Menzies Aviation appeared at speed from a roadway to the left which crossed the taxiway subject to vehicles giving way and collided with the front of the aircraft. The impact injured the Captain and spun the aircraft around causing substantial damage to both aircraft and fuel tanker. There was no fire but the impact and the emergency evacuation which followed resulted in 14 passenger injuries. 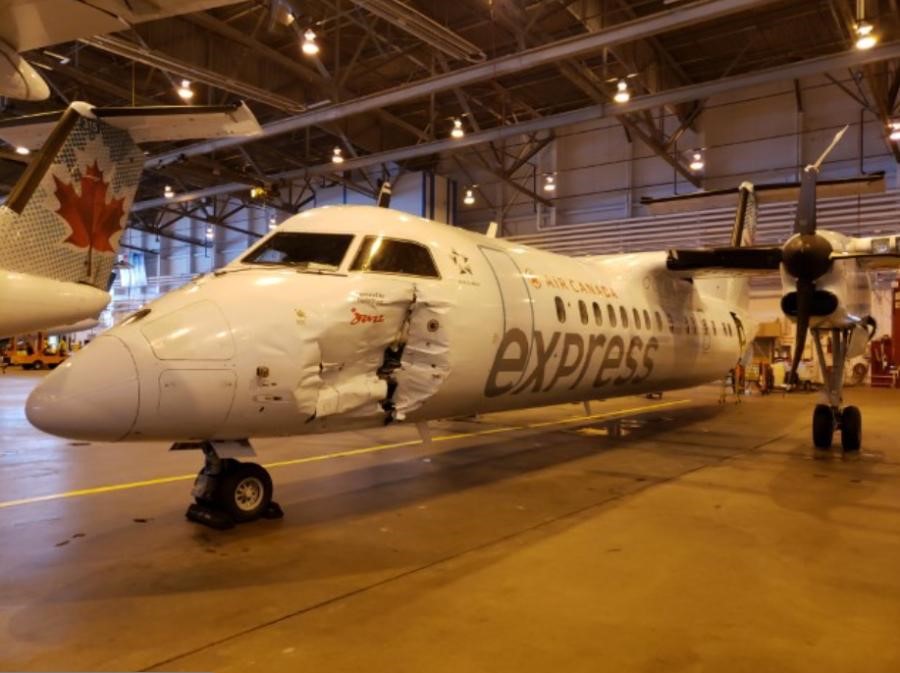 An Investigation was carried out by the Canadian Transportation Safety Board (TSB). The aircraft FDR and CVR were removed and their data, covering the accident up to the loss of electrical power at initial impact due to disrupted electrical connections, were successfully downloaded.

It was noted that the Captain, who had been PF for the flight, had a total of over 12,000 flying hours on type and the First Officer had a total of over 2,700 hours flying experience which included 1,280 hours on type. The Captain’s duty had begun at Montréal at 1300 the previous day. Both pilots had been on a block of days off of in excess of 4 days prior to the duty including the accident flight.

It was established that the flight had departed Toronto at 2303 local time the day prior to the accident and, after being unable to land at destination and returning to Toronto, it had landed there on runway 23 at 0126 the following day. After exiting runway 23 and beginning to follow the received taxi clearance shown on the illustration below, the after landing checks were commenced and the left propeller was feathered in accordance with SOP. The clearance as shown took the aircraft initially along taxiway H until taking a right turn onto taxiway B until reaching taxiway AK and turning left onto it at which point the aircraft was transferred to Apron Control. 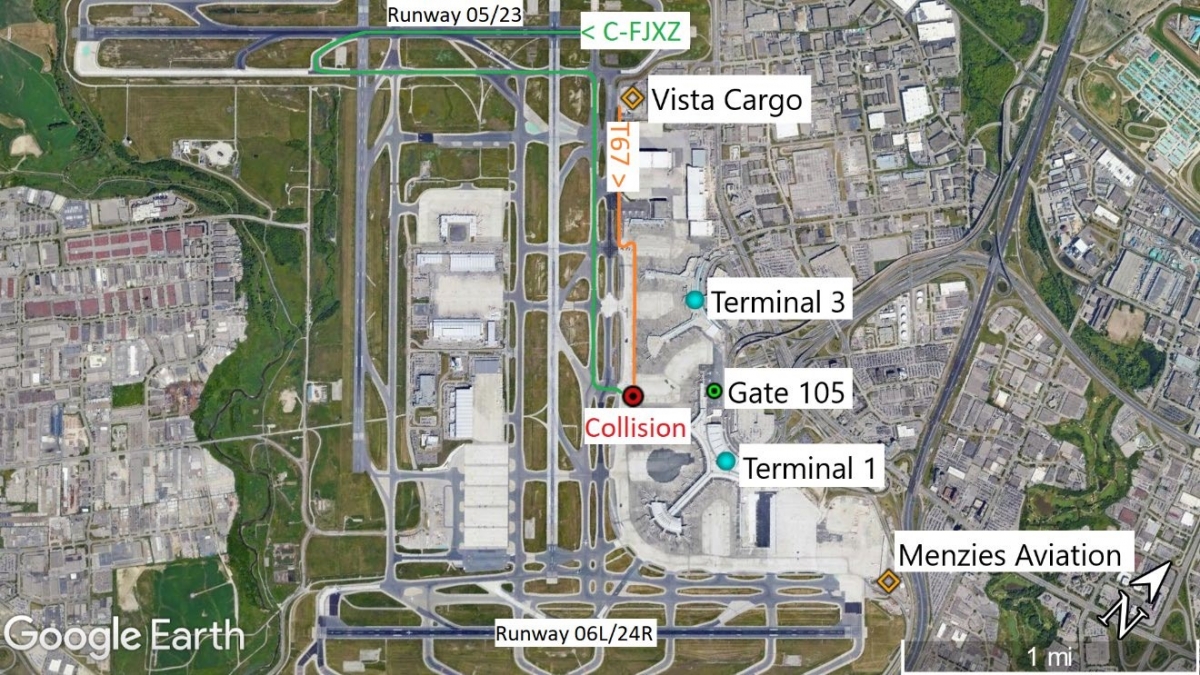 The routes followed by the aircraft and the fuel tanker prior to the collision. [Reproduced by the Official Report]

Apron Control cleared the aircraft to join lane 6 and continue to gate 105 at Terminal 1. This clearance was received approximately 10 seconds prior to the collision whilst the aircraft was turning to the right to join lane 6, which would have temporarily limited the Captain’s peripheral vision to the left as the aircraft continued taxiing at a speed of approximately 10 knots (see the illustration below). Meanwhile, the fuel tanker was approaching at a reported speed of “approximately 25 mph”, which was also the maximum permitted vehicle speed and equivalent to more than twice the speed of the aircraft. The marked roadway it was on was about to cross both Lane 5 and Lane 6 which were designated terminal area taxiways with aircraft priority over vehicles clearly ground-marked and signed. It was raining but visibility was not impaired on that account although the vehicle cab windows were reported by the driver to have had condensation on the inside. 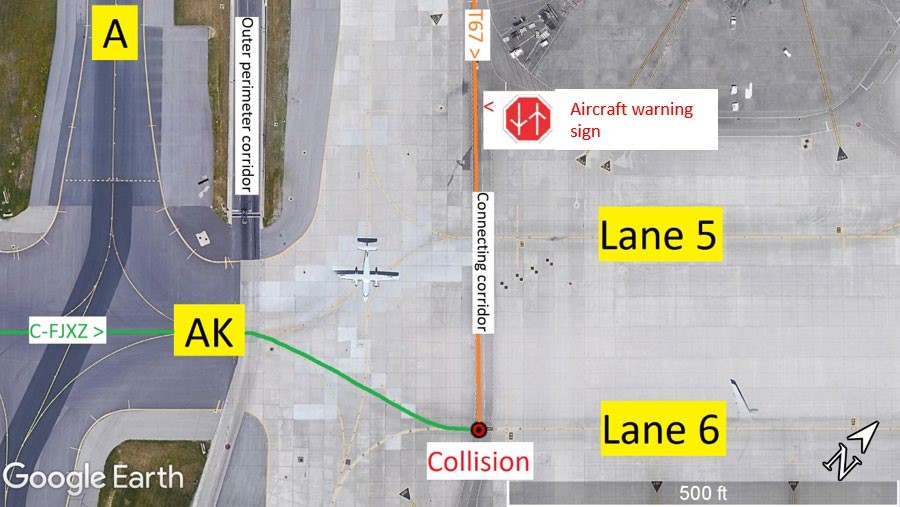 The collision site showing the approach routes of the vehicle and the aircraft. [Reproduced from the Official Report] 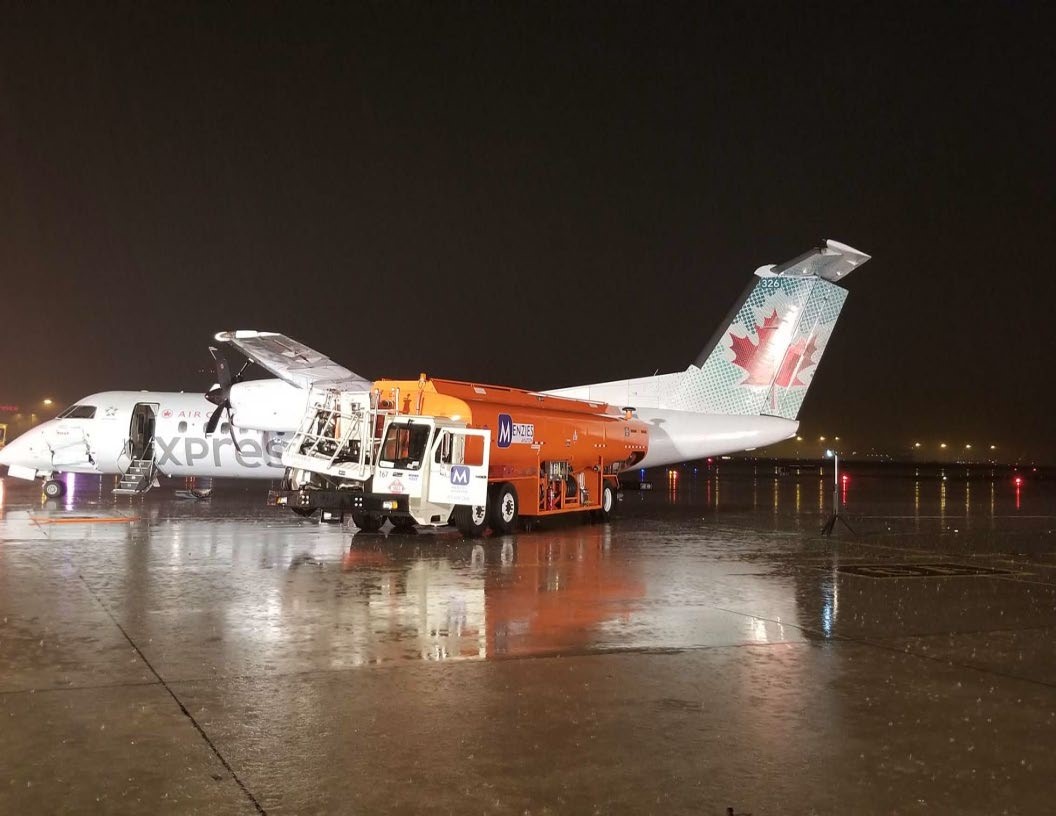 The final position of the aircraft and the fuel tanker after the collision. [Reproduced from the Official Report

The sole cabin crew member on board, seated at the front of the cabin, made a PA instructing the passengers to remain seated although despite this, some of them unfastened their seat belts and stood up. Almost half a minute after the initial impact had occurred, whilst the propellers were still turning, a passenger seated just in front of the right rear emergency exit climbed over the back of their seat and opened that exit, threw it outside and jumped from the exit, followed by a second passenger. At the same time, another passenger opened the left rear emergency but closed it immediately on seeing that the fuel tanker was close by and realising that the engine was still running.

Shortly after this, both engines were shut down and while the First Officer called Apron Control to advise that the aircraft had been hit by a truck and request the emergency services, the Captain called the cabin crew by interphone and instructed her to begin a rapid disembarkation. However, “due in part to increasing pressure from the passengers, including verbal threats from one of them”, she (slowly, unsure if there may be an obstruction or hazard below) opened the forward main passenger door. On doing so, she reported having immediately smelt fuel and because of that had decided to proceed with an evacuation rather than a rapid disembarkation and began shouting commands to “EVACUATE, EVACUATE, EVACUATE.” Almost all of the remaining 50 passengers then left via the main door, only 5 used the already-opened rear right emergency exit. The evacuation of all the passengers took just over 3 minutes. The three fight deck occupants (a member of another airline’s cabin crew was occupying the flight deck supernumerary crew seat) and the sole member of cabin crew also exited through the main door. The Captain, who had sustained a broken rib due to aircraft structure being pushed onto him during the initial impact, was the last off.

The nature of the primary and secondary impact with the fuel tanker resulted in passengers being “exposed to lateral impact forces, which led to back, shoulder, hip, head and neck injuries” to 12 of them. It was noted that such injuries are typical consequences of sudden and unrestrained upper body movement when being only restrained by a lap belt. The fuel tanker driver did not report sustaining any injuries as a result of the collision given that the initial impact had involved the opposite side of the vehicle to the one where he was seated. Damage to both the fuel tanker and the aircraft was “substantial” but whereas the fuel tanker was repaired and returned to service, the aircraft was found to be beyond economic repair and was declared a hull loss.

It was noted that airside vehicle drivers at Toronto are not required to be in radio contact with a controlling agency but must follow a set of rules implemented in the ‘Airport Traffic Directives’ document. This included a speed limit of 25 mph and the requirement that drivers should drive at reduced speed during adverse conditions. It was noted that the driver involved had commenced employment with Menzies Aviation in November 2018, a month after receiving his airside driving permit. He had initially been assigned to drive hydrant fuel dispensing vehicles within the apron area but after four months of this, he had undergone training to drive tanker refuelling vehicles of various sizes and had been authorised to operate them alone just under a month prior to the accident. It was found that the fuel tanker he had been driving had been equipped with an electrically heated demist which had adjustable airflow outlets that could be positioned to maximise their effectiveness. After the collision, these outlets “were found to be set in such a way that they were not operating at their full potential”. It was also found that only the left hand (driver’s side) window was fully open, the right-hand window, which had a restricted external sight line though the intervening refuelling platform equipment - the direction from which the aircraft was coming, was closed.

Safety Action taken as a result of the accident during the course of the Investigation was noted as having included:

The Final Report of the Investigation was authorised for release on 26 August 2020 and it was officially released on 5 September 2020. No Safety Recommendations were issued.