On 6 November 2014 a DHC8-400 sustained a burst right main gear tyre during take-off, probably after running over a hard object at high speed and diverted to Edmonton. Shortly after touching down at Edmonton with 'three greens' indicated, the right main gear leg collapsed causing wing and propeller damage and minor injuries to three occupants due to the later. The Investigation concluded that after a high rotational imbalance had been created by the tyre failure, gear collapse on touchdown had been initiated by a rotational speed of the failed tyre/wheel which was similar to one of the natural frequencies of the assembly.

On 6 November 2014, a Bombardier DHC8-400 (C-GGBF) being operated by Jazz Aviation as Air Canada Express flight JZA8481 on a scheduled domestic passenger flight from Calgary to Grande Prairie experienced a sudden failure of one of the main landing gear tyres on departure and because weather conditions precluded a return to Calgary, it was decided to divert to Edmonton where, on landing at night in normal ground visibility, it then suffered a right hand main gear collapse and partially left the runway. The aircraft sustained significant damage and propeller debris which penetrated the cabin wall led to 3 of the 71 passengers sustaining minor injuries and were taken to hospital. The emergency evacuation was quickly accomplished without further injuries occurring. 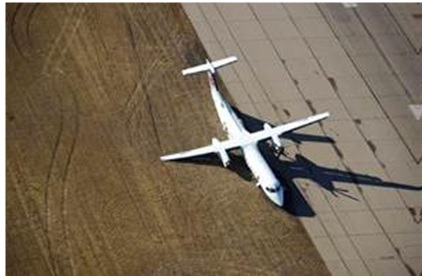 An Investigation was carried out by the Canadian Transport Safety Board. DFDR, QAR and CVR data were recovered and used to assist the Investigation.

As the flight approached rotation during take off from Calgary, there was "a noticeable vibration that ended once the aircraft was airborne". Once the aircraft was established in the climb, the flight crew discussed the vibration. They were informed by the cabin crew that the no 3 main gear tyre "had blown" and that "something had struck the aft fuselage". Strong crosswinds prevented a turnback to Calgary and after checking with the Company, it was decided to divert to Edmonton in order to change aircraft before proceeding to the intended destination. Company maintenance personnel "recommended that a hard landing be avoided".

During the approach to land on runway 02 at Edmonton, the crew observed that the usual landing gear down and locked indications were present but just over 2 seconds after a "very light" touchdown, "a pronounced vibration shook the aircraft" and whilst the NLG was still airborne, the right MLG collapsed. The right hand side propeller blades struck the runway and were all sheared off on contact. One "large section of a propeller blade" penetrated the fuselage in line with row 7. As the propeller hit the runway, the NLG came down hard, its tyres ruptured and it collapsed rearward. The aircraft slid slightly towards the right before coming to a stop with the collapsed MLG, the fuselage and the collapsed NLG on the grass to the right side of the runway some 975 metres beyond the touchdown point which was 740 metres beyond the runway threshold. DFDR data showed that the touchdown had been "light" and that the right hand MLG had collapsed at a speed of 105 KCAS whilst the power levers were being retarded into reverse.

The evacuation of occupants was ordered by both cabin crew 16 seconds after the aircraft had come to a stop. It began via door 2L seven seconds later and was completed in less than a minute using all 4 exits. Passenger injuries to the occupants of seats a 7F, 8F and 7C prior to the evacuation were found to have been "the result of the partial propeller blade that punctured the fuselage" and were "consistent with plastic pieces in the cabin interior (side wall, window, etc.) blowing into the seating area". "Blunt-force injuries, abrasions and small puncture wounds" were also sustained. It was noted that, on ground contact, the right hand propeller blades had initially "shattered into small pieces near the tips" and then "as they came closer to the ground, they sheared at the hub". It was accepted that "this is an expected and normal mode of failure when composite blades contact hard objects" and noted the reinforced area on the fuselage in the propeller plane - the ice guard - is only intended to protect the fuselage from ice shed by the propeller blades in icing conditions and is not designed to prevent fuselage penetration of liberated propeller blades or parts of impact damaged ones.

It was noted that the ELW had been close to the MLW and that the surface wind around the time of touchdown had been a light WNW breeze. It was also noted that the QRH carried on board the aircraft and derived from the AFM "makes no reference to any specific procedures in the event of a damaged tyre".

The deflated tyre was found still mounted on the No 3 wheel. Examination of it led to the conclusion that it had "failed due to an impact break, most likely caused by running over a hard object at high speed during takeoff". It was found that "some airlines have found that the number 3 main tyre fails more frequently than other tyres on the aircraft type involved". It was surmised that aircraft such as this which do not use a passenger bridge "sometimes make hard right turns under power while departing from the gate and use the right-side brakes to assist in the manoeuvre" and that such hard braking during turns can create "an extreme shearing force on the tread area and […] sidewalls of the number 3 tyre in particular, because it functions as the pivot point for such a turn”.

A full examination of all maintenance records for components relevant to the landing gear assemblies was carried out and "no anomalies were found". The main focus of the Investigation therefore became finding the reason for the main gear collapse during a benign touchdown when the gear leg had been indicating down and locked. It was found after extensive testing, including vibration testing not required for Type Certification and never previously conducted, that "an unexpectedly high rotational imbalance was created on the Number 3 tyre when it failed during takeoff". Then, "during landing, the failed Number 3 tyre was spun by contact with the ground and was maintained at a rotational speed that was the same as or very close to one of the natural frequencies of the MLG". This had caused the locking links to trigger […] the Proximity Sensor Electronic Unit (PSEU) to de-energise the Solenoid Sequence Valve (SSV) which led to the removal of system pressure from the extend port of the unlock actuator. In this condition, it was concluded that the excessive vibration had caused the locking links to overcome the force of the downlock springs and "unlock the (landing gear) stabiliser brace as a result of gear dynamics" which then led to the immediate collapse of the right MLG.

It was noted that "if there are no specific requirements for dynamic vibration testing of components or completed airframes, there is a risk that similar or other aircraft systems could fail during high-vibration conditions".

The formal statement of Causes and Contributory Factors was as follows:

A Finding as to Risk was also identified as follows:

Finally it was formally documented as an 'Other Finding' that "short-radius turns with hard braking may cause an extreme shearing force on the tread area and on the sidewalls of the number 3 tyre in particular, because it is the pivot point".

Safety Action taken by the Operator as a result of the event was noted to have included the following:

The Final Report of the Investigation was authorised for release on 9 March 2016 and officially released on 6 April 2016. No Safety Recommendations were made.