On 8 March 2015, a Bombardier DHC8-400 (VT-SUA) being operated by Spice Jet on a scheduled domestic passenger flight from Bangalore to Hubli as SG1085 left the side of the wet runway 26 at destination after a day IMC non precision approach and ended up approximately 50 metres from the runway centreline with substantial structural damage and with the left main and nose gear legs collapsed and the left propeller blades sheared off at the hub. One runway edge light was also destroyed. An emergency evacuation was accomplished from exits on the right hand side of the aircraft and none of the 82 occupants were injured. 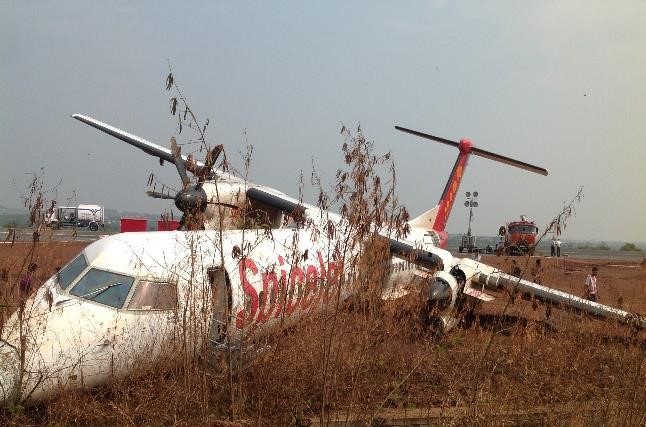 An Investigation was carried out by an Indian AAIB Committee of Inquiry. Data from the DFDR and CVR were successfully downloaded.

It was established that after arriving at destination and holding to await an improvement in the weather from 3,000 metres in heavy rain and thunder - all weather reports since an hour prior to departure from Bangalore had included "thunderstorm with rain" - ATC reported on request that the visibility had improved to 4,000 metres in moderate rain and cleared the flight to make an NDB approach to runway 26. However the Captain advised the First Officer (but not ATC) that they would instead carry out the VOR/DME trial procedure for the same runway. It was noted that the crew did not ask for (and ATC did not volunteer) information on the runway condition in the light of recent and continuing rain.

The procedural approach conducted was stable and, after the crew acquired visual reference with the runway about 6nm out, the aircraft subsequently touched down within the TDZ (Touchdown Zone) slightly to the left of the centreline. Evidence from ground track markings showed that after continuing for about 440 metres and drifting further to the left (in negligible surface winds) the left main landing gear hit a left side runway edge light and collapsed, which led to the left propeller coming into contact with the runway surface around 60 metres further on and all five propeller blades being sheared off at the root. Thereafter the Captain had manoeuvred the aircraft back on the runway but, with the aircraft speed 46 knots, "the nose wheel tyre failed under over load conditions, the nose landing gear collapsed and the aircraft belly came in contact with the runway surface". In the absence of directional control, the aircraft then departed the left side of the runway onto soft ground before eventually coming to a stop approximately 50 metre from the runway centre line. An emergency evacuation was announced by the flight crew and completed uneventfully with the assistance of the emergency services.

Damage sustained by the aircraft was extensive and included, but was not limited to, extensive structural damage to the fuselage and left wing, both engines and the nose and left main landing gear - see the illustrations below in the case of fuselage and wing damage.

Contrary to the Captain's statement which claimed that he had selected full reverse on both engines and had "tried to maintain the aircraft on the centreline", the DFDR data showed that rearward movement of the power levers after touchdown had been asymmetric with only the left lever just entering reverse for two seconds and that there had been no rudder pedal input. The CVR data included a non-standard alerting call in respect of the directional deviation of "watch, watch" from the First Officer.

Following a detailed examination of the failed landing gear assemblies, it was found that they had been airworthy prior to the accident and that the left main gear collapse had been caused by impact with the edge light which was found to have had a non-frangible metal portion. This metal portion had been "temporarily chamfered with cement" contrary to prevailing regulatory requirements and as the left main wheel hit the light at around 80 knots, the frangible portion collapsed as per the design but the exposed metal portion was strong enough to cause the main landing gear lock mechanism to unlock and the left landing gear to retract.

The Investigation noted that the DGCA had issued a regulatory requirement in 1992 which was still applicable and required that any draft Instrument Approach and Landing (IAL) procedure such as that conducted prior to the investigated accident "be given at least three flight trials by examiners or instructors employed by the operator in day VMC only" whereas the corresponding Spice Jet procedure also permitted "line Captains with more than 1,000 hours in command on type" (such as the Captain in this case) to also carry out VOR trial procedures. It was found that this variation from the DGCA procedure had not been based on any risk assessment. 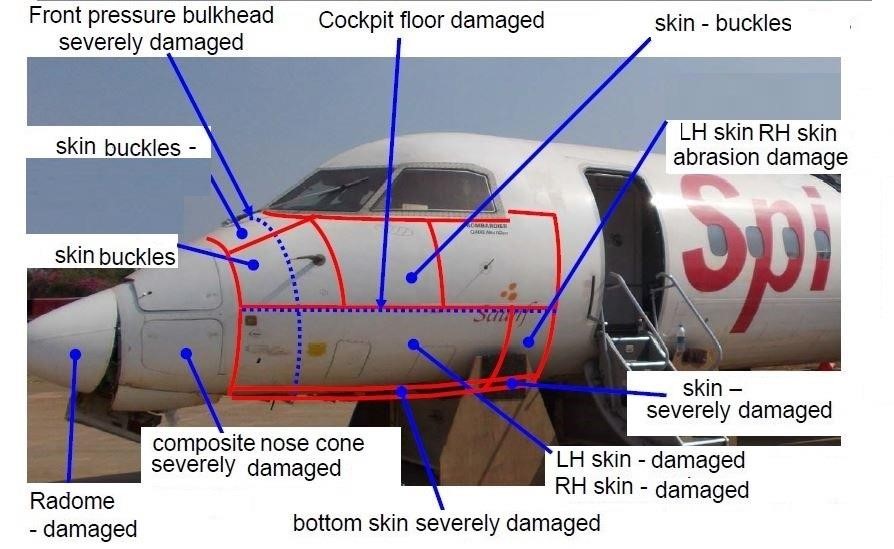 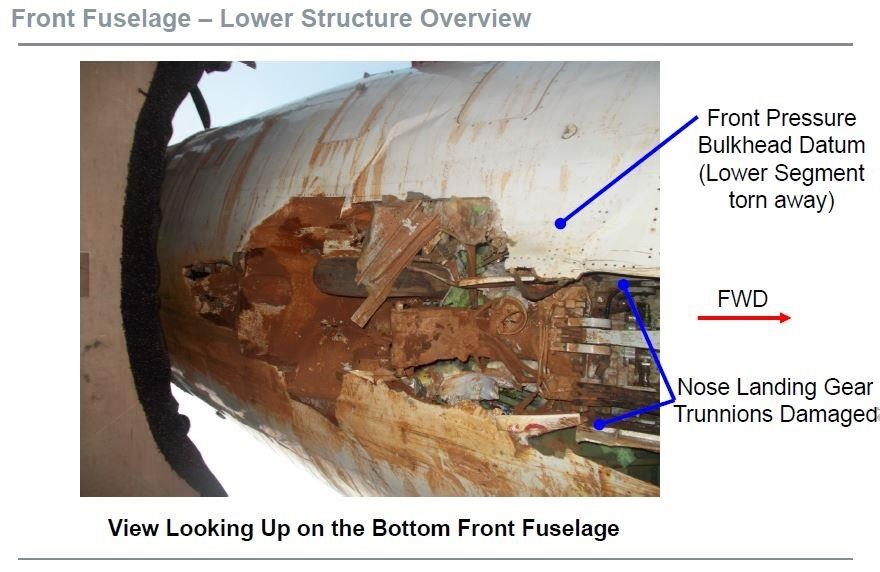 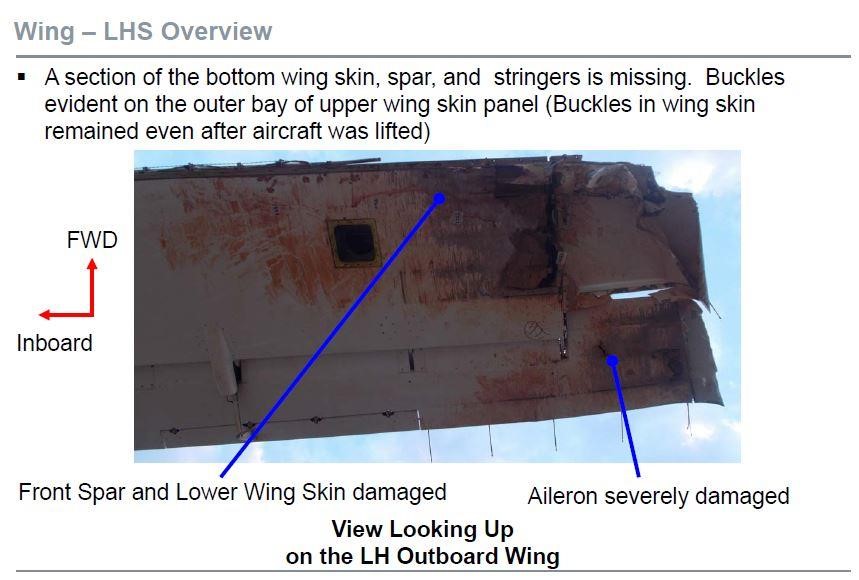 Lower view of part of the left wing. [Reproduced from the Official Report]

The Investigation determined that the Probable Cause of the Accident was that "loss of visual cues after touch down in inclement weather conditions resulted in the aircraft veering to the left of the centreline and then off the left side of the runway”.

A further 'Possible' Contributory Factor was also identified - the fact that a "trial instrument approach procedure" had been flown prior to the excursion which, although it was permitted for the crew concerned under Spice Jet procedures, was contrary to extant regulatory procedures in place since 1992 which limited the flying of such approaches to examiners and instructors who must confine this privilege to day VMC.

The Final Report was completed on 2 May 2017 and subsequently published.