On 8 May 2019, a Bombardier DHC8-400 making its second approach to Yangon during a thunderstorm touched down over halfway along the runway after an unstabilised approach but then briefly became airborne again before descending very rapidly and sustaining extreme structural damage on impact before sliding off the end of the runway. The Investigation found that prior to the final rapid descent and impact, the Captain had placed the power levers into the beta range, an explicitly prohibited action unless an aircraft is on the ground. No cause for the accident other than the actions of the crew was identified.

On 8 May 2019, the crew of a Bombardier DHC8-400 (S2-AGQ) being operated by Biman Bangladesh Airlines on a scheduled international passenger flight from Dhaka to Yangon as BF60 continued an unstabilised approach in day VMC which eventually ended with a very hard final touchdown which caused extensive structural damage to the aircraft and ended in a runway excursion. All 34 occupants survived with 12 sustaining serious injuries and 8 sustaining minor injuries. 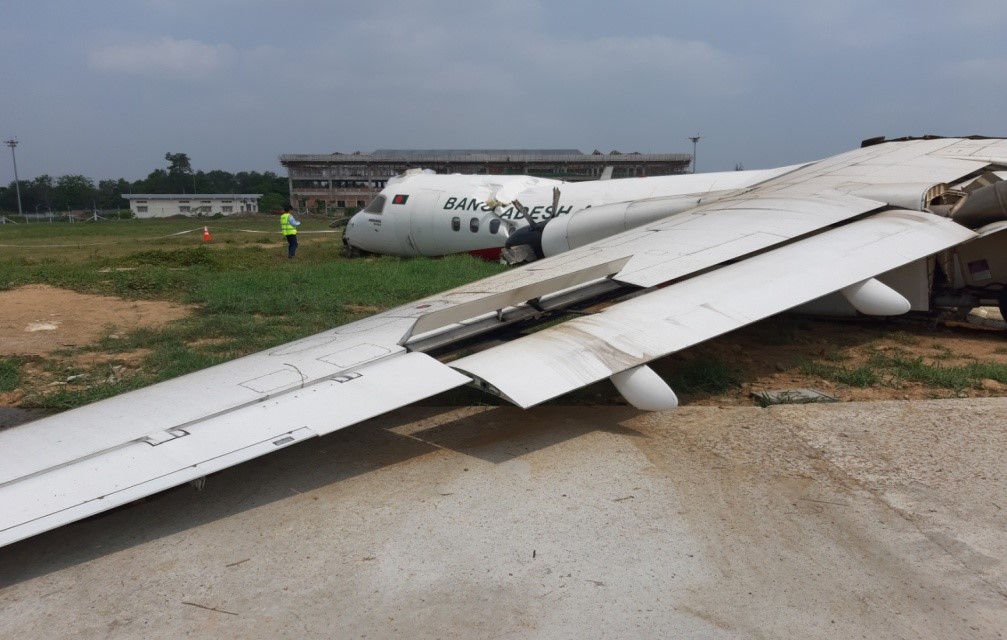 Part of the aircraft in its final resting position. [Reproduced from the Official Report]

An Investigation was carried out by the Myanmar Aircraft Accident Investigation Bureau (AAIB). The aircraft SSFDR and CVR were removed from the aircraft and sent to the Australian Transport Safety Bureau (ATSB) where their data were downloaded.

It was established that an initially commenced ILS approach to runway 21 at destination with the First Officer as PF had been discontinued at 2000 feet on instructions from ATC and the flight instructed to climb to 8000 feet and hold at the ‘HGU’ VOR because of adverse weather. ATC had then advised to expect the airport to be closed for two hours on that account but when there was a slight improvement less than half an hour later, the flight was cleared for a second approach to the same runway despite the continuing presence over the airport of a thunderstorm and accompanying heavy rain.

This time ATC advised that the ILS was no longer available and a LOC/RNP approach was therefore flown. The final approach was reported by the Captain to have been slightly high compared to the correct PAPI indication - one red/three white with a wet runway sufficiently visible to continue to a landing. Recorded flight data suggested that although the First Officer had remained as PF, the latter stages of this second approach were characterised by intermittent control column inputs from the Captain as well as considerable verbal ‘coaching’. It was also apparent from the recorded flight data that the approach had been flown at a speed consistently well above the appropriate flap 15 VREF of 122 KIAS, generally about 25 knots above it, which meant the approach was unstable when assessed against the applicable stabilised approach criteria.

Below 30 feet agl over the runway, both pilots were recorded as having simultaneously made similar but opposite control column inputs, the Captain making a forward (nose down input) and the First Officer a rearward (nose up) one. A reportedly smooth touchdown just over half way along the 3,413 metre-long runway was followed by approximately 7 seconds on the ground in the centre of the runway. During this time, three successive transient compressions of the main landing gear separated by two equally transient releases of compression occurred. The Captain is then recorded as announcing that he is taking over control and the aircraft then became airborne again as the pitch angle was increased to 8° over 4 seconds. On reaching a maximum of 44 feet above the runway, the power levers were moved into the beta range and the aircraft, still with a forward speed well in excess of 100 knots descended at around 1800 fpm and impacted the right hand edge of the runway extremely hard in a slightly nose-down attitude. The landing gear collapsed, the right wing partially detached, the fuselage split open in three places and the aircraft slid along the edge of the runway and then into the overrun area before coming to stop in mud 60 metres to the right of the runway centre and 44 metres beyond its end. 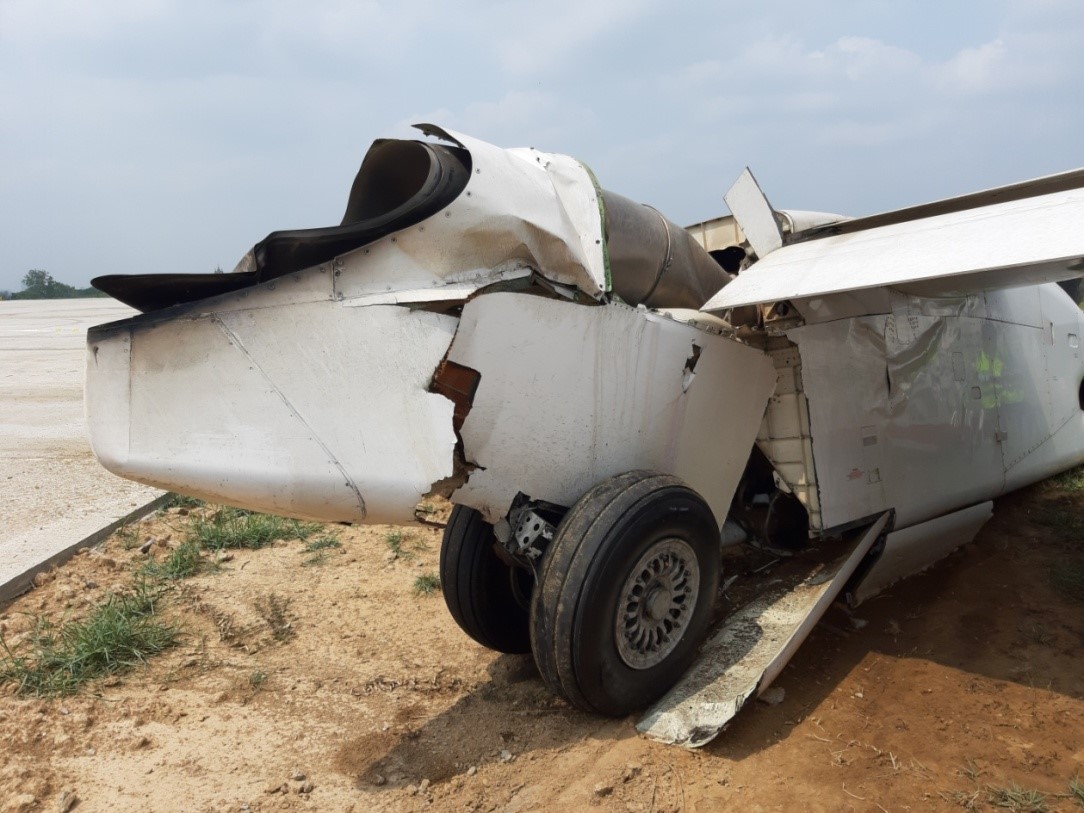 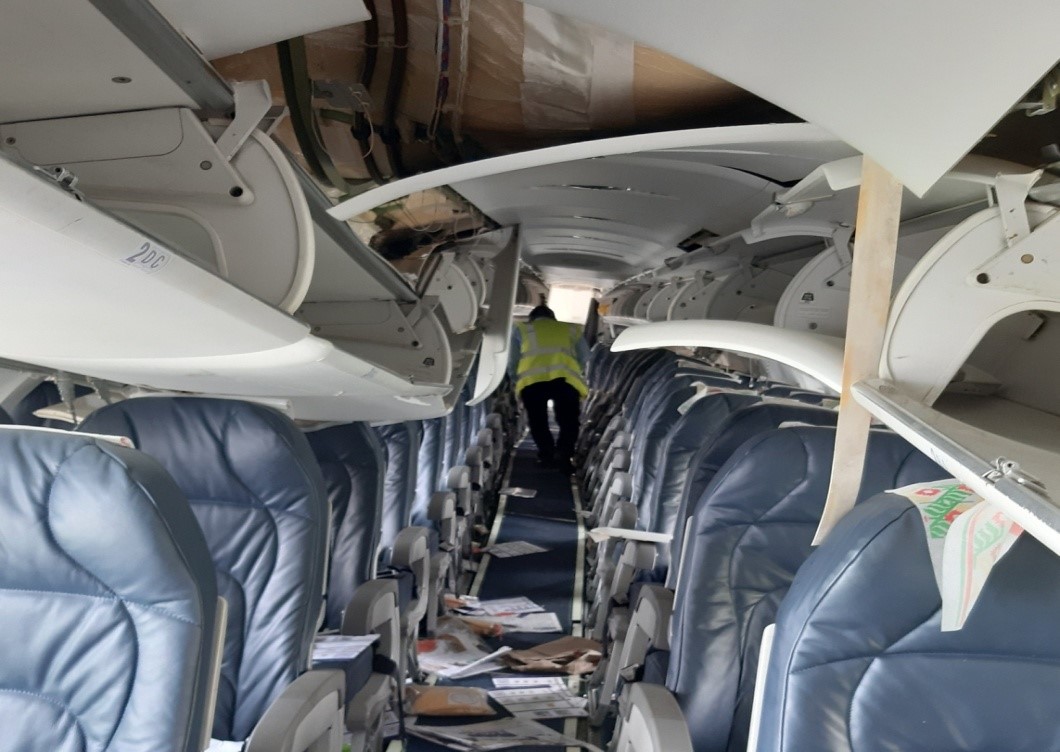 The damaged passenger cabin interior. [Reproduced from the Official Report]

There was no fire but as the cabin crew were all injured, they could not initiate an evacuation and all passengers self evacuated through available exits assisted by a company ground engineer who had been on duty travel in the passenger cabin. Airport RFFS vehicles arrived at the scene within three minutes and immediately took action to cool down the collapsed landing gear, wings and engines. The flight crew were unable to exit into the cabin and eventually left the aircraft via the flight deck ditching hatch with the assistance of RFFS personnel.

The Primary Cause of the conflict was formally documented as "although the aircraft was unstabilised on approach, the pilot did not execute a go-around”.

The Final Report of the Investigation was published on 4 January 2020. The two Appendices referenced in the main text of the Report were not included in the version released online.