On 11 May 2010, a Bombardier DHC8-400 aircraft being operated by Porter AL on a scheduled passenger flight Toronto City to Ottawa and another aircraft of the same type and operator on a scheduled passenger flight from Montreal to Toronto City came into close proximity south east of the airport and received and actioned co-ordinated TCAS RAs. Minimum separation was 300 feet vertically at the same altitude. There were no abrupt manoeuvres and none of the occupants were injured.

On 11 May 2010, a Bombardier DHC8-400 aircraft being operated by Porter AL on a scheduled passenger flight Toronto City to Ottawa and another aircraft of the same type and operator on a scheduled passenger flight from Montreal to Toronto City came into close proximity south east of the airport and received and actioned co-ordinated TCAS RAs. Minimum separation was 300 feet vertically at the same altitude. There were no abrupt manoeuvres and none of the occupants were injured.

An Investigation was carried out by the Canadian TSB. It was established that the conflict occurred in Class ‘D’ airspace so that ATC separation was only provided between Instrument Flight Rules (IFR) aircraft. It was noted, however, that the ATC ‘Manual of Operations’ “requires that conflict resolution be provided when equipment and workload permits”. Such conflict resolution is stated as requiring “either visual separation or a minimum of 500 feet vertically or 1 mile laterally”.

The inbound aircraft later involved in the conflict was cleared for a visual approach to Runway by the occurrence controller when 20nm east of the destination airport and at 7000 feet Altimeter Pressure Settings. This visual clearance was unrestricted and permitted the aircraft to descend at flight crew discretion.

The outbound aircraft involved asked the airport controller for Visual Flight Rules (VFR) departure whilst retaining its IFR FPL. It was noted that aircraft departing to the east IFR would be normally be issued with an ‘Island Eight’ SID but subject to suitable weather conditions, it was common for IFR flights to request a VFR departure “to expedite traffic during busy periods” and such a qualified clearance was issued in response to the request as “maintain VFR for 10 minutes after take-off. Climb not above 2,000 feet” and added a heading of 141° which was the same as part of the Island Eight SID.

One minute before the departing aircraft was cleared for take off, the radar controller informed the airport controller that the inbound aircraft was 20 nm to the east and had been cleared for a visual approach to Runway 08. In turn, he was advised of the imminent VFR departure. Having cleared the departing aircraft for take off, the airport controller retained it on the TWR frequency until it had reached a position 3nm east of he airport and was climbing through 1900ft QNH in an attempt to ensure there was no conflict with local airport traffic. By this time, the inbound VFR aircraft was 10 nm east-southeast of the airport and descending through 3300 feet QNH. Having forgotten that he had previously issued a clearance for an unrestricted visual approach, the radar controller then instructed this aircraft to fly heading 270° to accommodate the departing traffic and advised that it would receive an approach clearance and frequency change shortly.

On transfer to radar, the outbound aircraft made a call on the radar frequency advising that it was leveling at 2000 feet and in the turn to heading 141° but this was not heard by the controller who was “busy communicating with a different controller regarding an unrelated control issue”. Shortly afterwards, the radar controller contacted the airport controller to seek information on the departing aircraft. Sixteen seconds later, communication was established with this aircraft and it restated its position. Without acknowledging that transmission, the radar controller immediately instructed the inbound aircraft to level off at 2500 feet upon which this aircraft replied that it had already descended through 2300 feet but would climb back to 2500 feet. The radar controller then informed the departing aircraft of the position of the inbound one 1.5 nm away at 2300 feet and six seconds later, the departing aircraft reported the inbound one in sight. Then, whilst another aircraft transmitted on the radar frequency, both aircraft received and responded to TCAS RAs and “seconds later” crossed flight paths with 300 feet vertical separation approximately 6 nm east southeast of Toronto City Airport. The diagram below shows the tracks of the two aircraft. 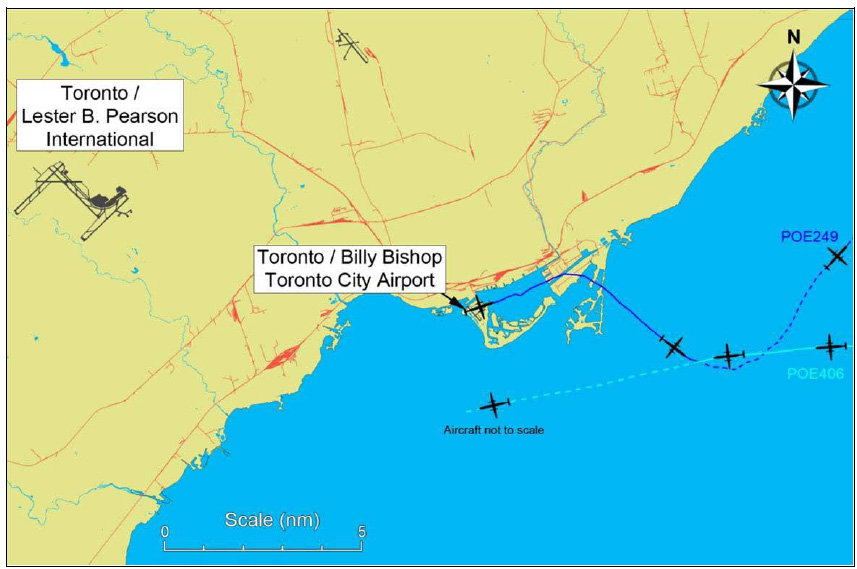 The Investigation considered the possibility of fatigue having had an effect on the radar controller’s performance. It was note that his previous shift had ended the evening before at 2300. He was not scheduled to work on the day of the occurrence but had accepted an overtime shift offered shortly before it had begun at 0700 and was “not well-rested”. It was noted that during a four day period off duty prior to the late shift the previous day, he had been “attending to distressing personal matters that had been on-going since December 2009” which had led to “diminished sleep quality” with 6 hours per night becoming routine. It was noted that “chronic restriction of sleep from 8 hours to 6 hours per night results in daytime fatigue” and a concomitant reduction in performance of demanding tasks.

The approach to the issue of fatigue by the employing ANSP, NAV CANADA, was noted as a “Fatigue Management Program” which had been integrated into its Safety Management System. This included “controller education, preventative and operational strategies, controller scheduling practices and the concept of shared responsibility”. The employer was found to rely on controllers to monitor their own fatigue and performance despite widespread awareness that the relationship between subjective levels of fatigue (i.e. how a controller feels) and estimates of future performance is complex and not completely understood. Reliance appeared to be placed on the use of a self-administered questionnaire designed to assess whether or not a person is fatigued. However, use of this questionnaire was not mandatory and no instructions on when it should be used and by whom it should be used had been provided. It was noted that “no other fatigue assessment is performed by either controllers or NAV CANADA”. It was concluded by the Investigation that “unacceptable levels of fatigue and performance decrements while on duty may not always be identified”.

The formally stated Findings of the Investigation were:

The Final Report of the Investigation: A10O0089 was released by the TSB on 26 January 2012. No Safety Recommendations were made.