On 17 October 2011, the pilot of a Merpati DHC6 attempting to land at Dabra on a scheduled passenger flight lost control of the aircraft when several bounces were followed by the aircraft leaving the runway and hitting some banana trees before re entering the runway whereupon a ground loop was made near the end of the runway to prevent an overrun onto unfavourable terrain. The aircraft was damaged but none of the occupants were injured. The mis-managed landing was attributed to an unstabilised approach.

On 17 October 2011, a De Havilland DHC6 Twin Otter being operated by Merpati Nusantra Airlines on a scheduled passenger flight from Sentani to Dabra left the runway after a bounced touchdown in normal day visibility before departing the runway, rebounding from impact with a tree, re-entering the runway and being put into a ground loop as the end of the runway was reached and coming to a stop 36 metres from the end of it. None of the 16 occupants were injured but the aircraft sustained significant damage.

An Investigation was carried out by the NTSC. The aircraft was not fitted (or required to be fitted) with a Flight Data Recorder (FDR) and when the Cockpit Voice Recorder (CVR) which was fitted was downloaded, it was found that it had been allowed to continue running after the investigated event so that the relevant data had been overwritten.

It was noted that approaches to Dabra must be made in accordance with Visual Flight Rules (VFR). It was established that the First Officer was PF and that all his recorded flying hours were on the DHC6. The Captain was experienced in respect of total flying hours but their experience on the accident aircraft type was “not provided by the Operator”.

It was noted that no weather information was provided to aircraft arriving at Dabra but that it was customary for the local agent at Dabra to make a report to Merpati every morning by HF radio in respect of the prevailing weather and any other matters which might be relevant to use of the airstrip that day. Since there is no air/ground facility at Dabra, it was customary for aircraft about to approach or depart from the airstrip to announce their intention on VHF frequency 122.2 MHz.

The approach was found to have been made to 600 metre long and 18 metre wide runway 24 (see diagram below) with touchdown on one main wheel occurring approximately 200 metres past the landing threshold and on the second some 375 metres past the landing threshold. Shortly after this, directional control had been lost and the aircraft had departed the right side of the runway and the right wing had hit some banana trees sited 6.5 metres from the runway edge before re-entering the runway about 25 metres from its end whereupon a ground loop to the left was executed and the aircraft came to a stop on a heading of 350°.

Available evidence did not suggest that the weather conditions at the time had been a material factor in the outcome. Statements from the pilots suggested that the aircraft had initially been too high on the approach but that after power had been reduced in response, an excessive sink rate had been allowed to develop which led to bouncing during touchdown and after the departure from the runway and tree impact, the aircraft commander had recovered control of the aircraft and used the ground loop to avoid an overrun onto unfavourable terrain.

The aircraft sustained fuselage distortion and significant landing gear damage but there was no mention of the Investigation finding any damage as a result of the impact of the wing with the banana trees. 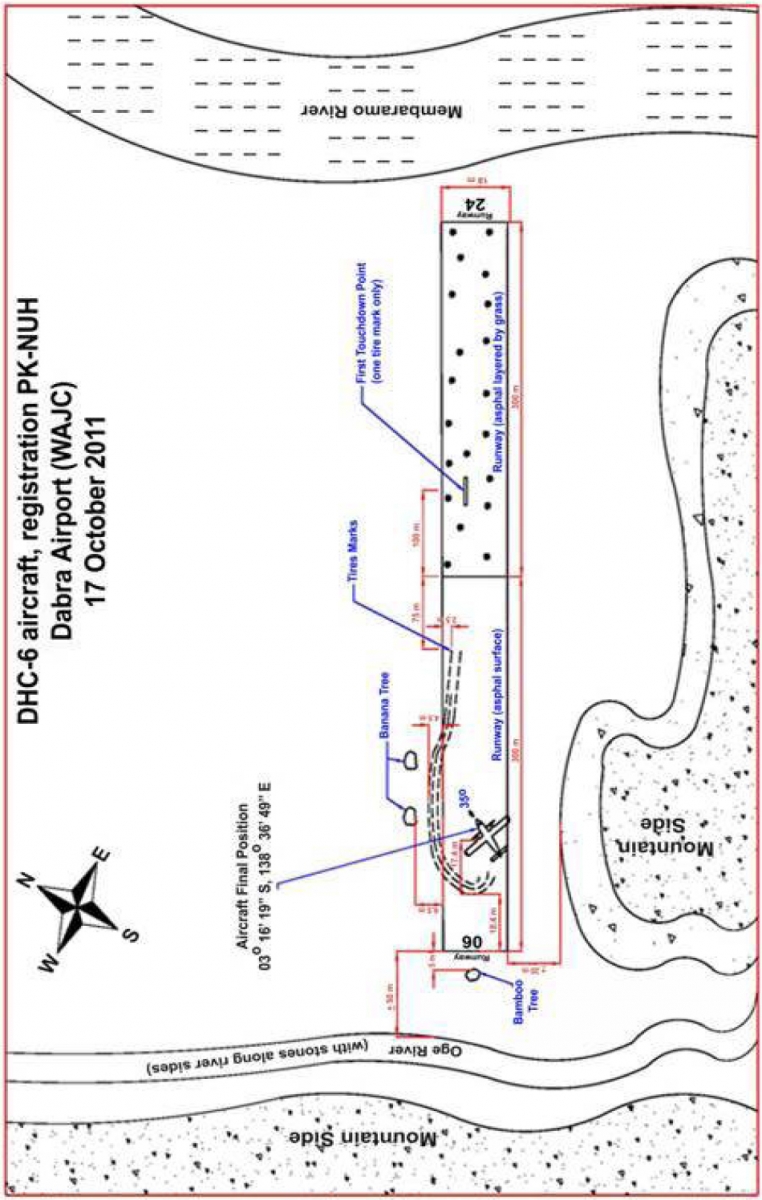 The Investigation did not formally identify a Cause for the event but concluded that “the aircraft…most likely (made an) unstabilised approach (then) bounced during landing, veered to the right, (left and then re-entered) the runway (and was finally stopped by a ground loop) on the runway”.

Safety Action taken by Merpati Nusantra Airlines during the course of the Investigation was reported as the issue of a Notice to Pilots detailing various circumstances in which the aircraft commander must be PF for an approach and landing:

The Final Report of the Investigation was published on 25 October 2013.