On 22 December 2017, an Embraer 145 departed the side of the runway shortly after touching down at Bristol and finally stopped 120 metres from the runway edge. The Investigation found that the aircraft had landed after the emergency/parking brake had been inadvertently selected on during the approach when the intention had been to deploy the speed brakes. It was noted that the Captain designated as Pilot Flying had been new to both the aircraft type and the Operator and had been flying under supervision as part of the associated type conversion requirement for line training.

On 22 December 2017, an Embraer 145 (G-CKAG) being operated by bmi Regional on a scheduled passenger flight from Frankfurt to Bristol left the side of the runway soon after touching down in fog off a daylight Cat II approach to runway 27 at destination. Damage to the aircraft was not significant and none of the occupants were injured so an emergency evacuation was not ordered. ATC, who in the absence of surface movement radar did not know where the aircraft was, were advised of the excursion by the crew who had shut down the engines and started the APU. RFFS vehicles reached the aircraft within 3 minutes and established direct communications with the crew on the designated frequency of 121.6 MHz.

A Field Investigation was carried out by the UK AAIB. Data were successfully downloaded from both the FDR and CVR. FDR data parameters did not include use of the Emergency/Parking Brake but did include use of the speed brakes. Other available recorded data sources were ATC communications, the airport primary radar, the regional secondary radar which covered the Bristol area and airport CCTV recordings. FDR data were matched to ATC radar data to establish the aircraft flight path as it positioned for the approach.

It was noted that the 50 year-old Training Captain in command and occupying the right hand seat as PM had a total of 8,600 flying hours which included 5,100 hours on type. The Captain under supervision had recently joined the Operator after flying the Saab 2000 for another operator and had 17 hours flying experience on the 145 at the time of the accident. The accident sector was his eighth line training sector with previous sectors including four Category II approaches including one in actual low visibility conditions. His training was recorded as having "progressed well" prior to the accident.

It was established that with the flight already transferred to Bristol ATC the crew were advised that there would be no delay to their approach and that when the aircraft was approaching FL140, ATC had advised that there were 30 nm to touchdown and asked if any more were required. This was declined and almost immediately, the PF was recorded as saying "speed brake coming on" but this was not followed by the FDR evidence which deployment would have provided. Soon after descending through FL110, the Training Captain was recorded as advising that speed brake deployment and idle thrust would be advisable followed by the PF saying "it's already on" during an R/T transmission by the former who was consequently unaware of this response. After a short interval and as it became increasingly clear to the Training Captain that the aircraft was too high for the originally envisaged approach track, he further advised "I would go speed brake open" and the PF response was "it is, oh no it's not, who closed that?" and selected it for the first time. A request for additional track miles was granted and a routing through the extended runway centreline was followed by completion of the descent checklist and commencement of the approach checklist was started. On reaching the second item - ‘Seatbelt Sign.....ON’, the PM erroneously called “Park Brake” and received the response “On” from the PF which was immediately followed by an ATC instruction to continue descent to 2500 feet and turn right onto 360º. Because of the interruption, the approach checklist was restarted from the beginning and this time completed without any errors. The final approach was stable and the required visual reference was available at the 100 feet agl CAT 2 ILS DH. The PF then disconnected the AP at 80 feet agl and performed a manual landing with the aircraft ELW 2½ tonnes below the MLW.

On touchdown, which occurred at approximately 470 metres past the displaced landing threshold, there was an abnormally rapid de-rotation and the PF reported that he had found that it was difficult to maintain directional control despite making corrective rudder inputs. The Training Captain reported that he had thought that the PF might be “riding the brakes”, which he considered was not an unusual occurrence during type conversion training, and had advised him to take his feet off the brakes. He had then again intervened when the PF had sought to use the steering tiller at excessive speed. The PF stated that although he had then considered using asymmetric thrust, he "did not think he had moved the thrust levers" whereas in fact they had been advanced. After a brief deviation right of the centreline, the aircraft departed the left side of the runway onto wet grass and the Training Captain reported having seen at that point that the parking brake was on. The aircraft continued for 120 metres before coming to a stop whereupon the PF saw that the thrust levers were actually forward of idle and retarded them to idle. After reviewing the situation, the crew decided that the aircraft was in a safe condition and an evacuation was not necessary. Whilst the PM was advising ATC of their excursion and approximate position, the PF made a PA to the cabin to advise the passengers to remain seated. The engines were then shut down and the APU started and the RFFS reached the aircraft within three minutes and established two-way contact on the designated ground emergency communications frequency 121.6 MHz. Soon after the aircraft had stopped, the PF reported having realised that he must have set the parking brake when he had intended to select the speed brakes. 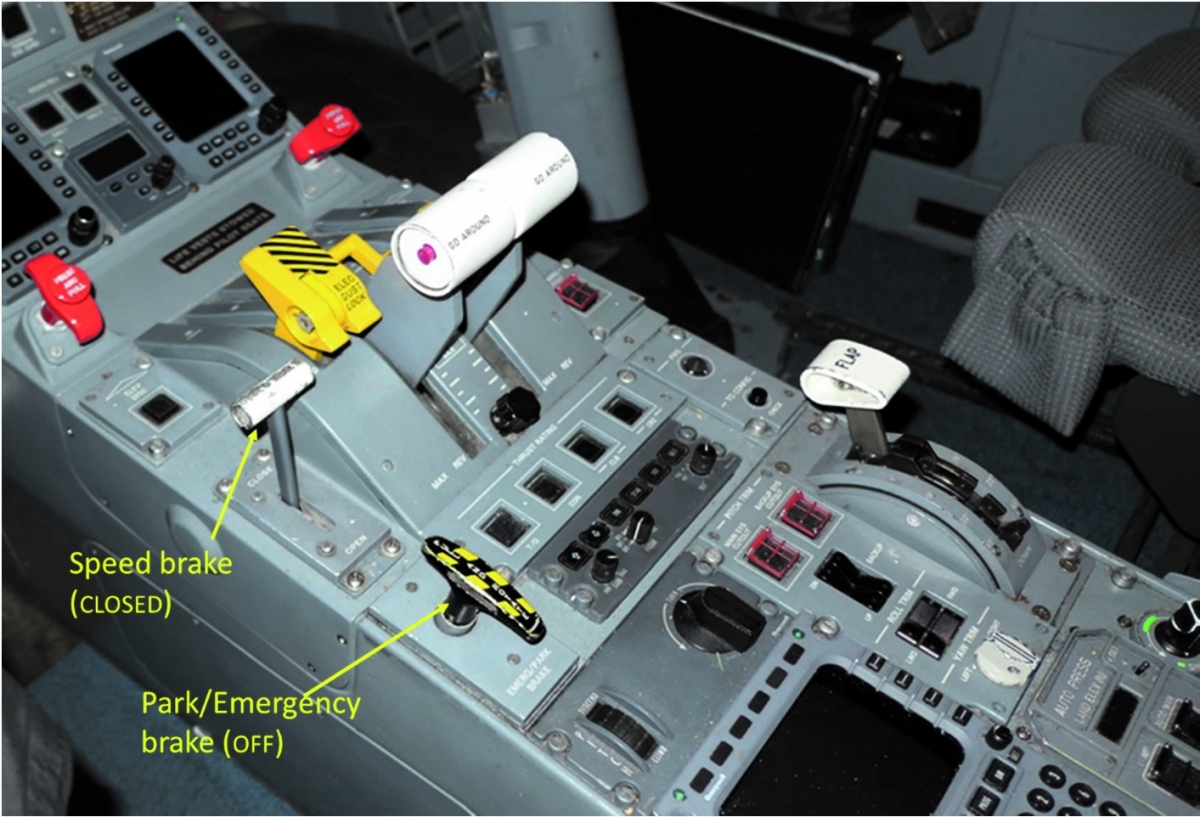 FDR data were able to establish the actual sequence of events once the aircraft was on the runway. When the aircraft initially began to track to the right of the runway centreline, left rudder was used in response but the rudder input exceeded that required and the aircraft swung back to the left and briefly skidded almost along the centreline. An application of right rudder was not enough to correct this and the yaw left continued. Deceleration ceased when both thrust levers were advanced, the left slightly more than the right, and with thrust applied the aircraft departed the left side of the runway at a groundspeed of around 45 knots some 1100 metres past the displaced landing threshold, with a little over 40% of the LDA remaining. Once on soft ground, deceleration resumed and at a ground speed of approximately 20 knots, the thrust levers were retarded to idle and three seconds later, the aircraft came to a stop on a heading of 296°M. The main landing gear wheels were all buried up to their axles and all their tyres had deflated on touchdown when wheel rotation was prevented. The only other damage was to the left main landing gear strut and to the main landing gear wheel rims due to tyre deflation.

Confusion between the E145 Parking Brake and Speed Brake handles

The two handles are located in close proximity on the left hand side of the central console. However, the Speed Brake control moves fore and aft in the same plane as the thrust levers with the forward position being closed and operates the outer spoilers. The Parking Brake - which also doubles as an Emergency Brake - is applied by pulling the yellow and black striped handle up and then turning it 90° to the left to lock it in position. The illustration below shows the relative positions of the two brake selectors. 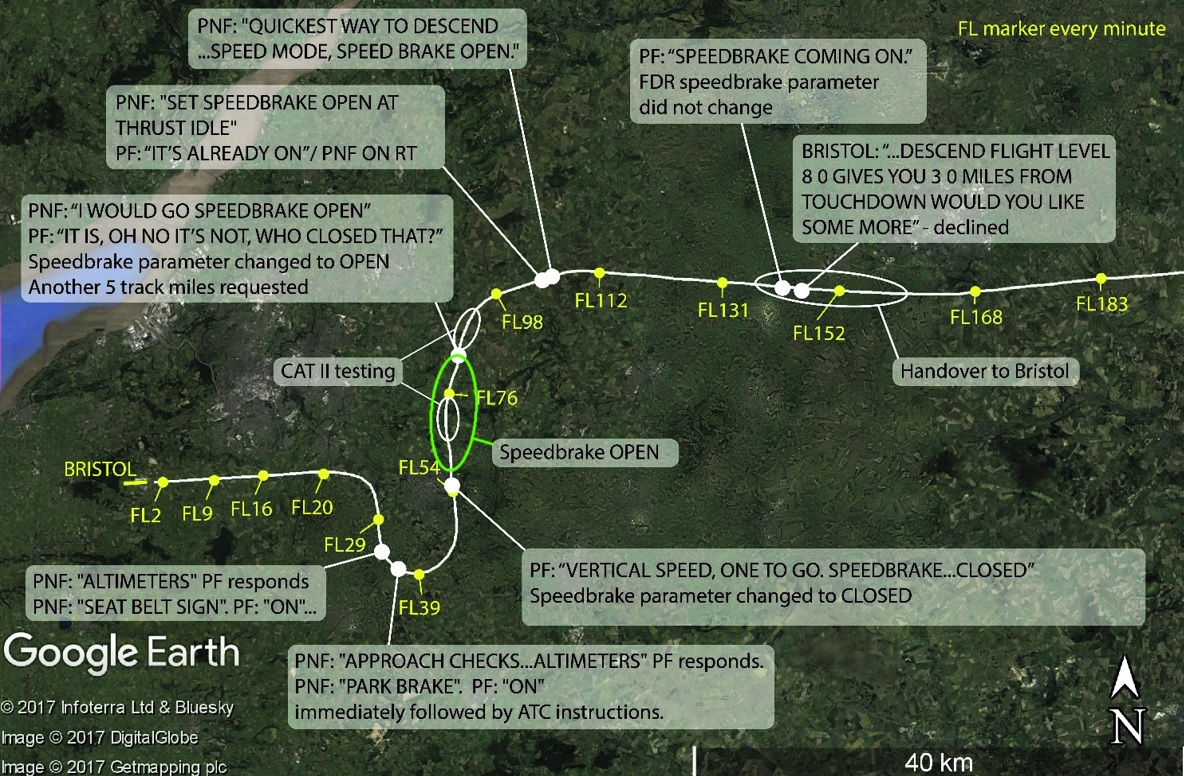 The two brake selectors viewed from the left. [Reproduced from the Official Report]

It was noted that with the pilot’s seat in its fully forward position, the parking brake handle is no longer in their direct line of sight and is therefore likely to be operated by ‘feel’. The aircraft manufacturer’s system safety case was found to have classified the consequences of landing with the parking brake on as of ‘major’ severity but rated the chances of this occurring as extremely improbable and the risk was therefore assessed as acceptable. No consideration was given in this assessment to the possibility that the parking brake might be applied before landing because of an operational error and Embraer advised that “it does not have a plan to conduct a system review related to the parking brake status”.

Embraer advised that they were aware of two previous occurrences where an ERJ 145 family aircraft (this includes the smaller E140 and E135) had landed with the parking brake on but as neither had resulted in a runway excursion, no investigation had been carried out. It was noted that one of these events had involved a flight deck with the ‘Brake On’ light situated within the normal pilot field of view in contrast with the other and the case under investigation here where the ‘Brake On’ light was outside the direct field of view. However, it was considered that “there was insufficient evidence to draw conclusions about the effectiveness of the different panel layouts in preventing this type of accident”.

The Investigation noted that the UK AAIB had carried out an Investigation into an Airbus A319 landing with the park brake sector on in 2007 in which the aircraft had remained on the runway. In this case, the parking brake had been set to on instead of selecting flaps to the landing position. This aircraft type had subsequently been modified to provide a master caution light and audio alert should the parking brake be set on in flight.

Other cases where controls of different shape/feel on the central console had been mixed up were noted to have included incidents in 1986 and 1987 which involved Boeing 767 double engine flameouts during the initial climb after takeoff when both engine fuel control switches were set to off when the intention was to select the differently shaped and differently-actioned EEC switches. More recently, two UK AAIB investigations of A320 family events in February 2016 were noted in which the flaps were retracted after takeoff instead of the landing gear being selected up. Again it was noted that despite the location, shape and feel of the respective controls being different, mis-selection had still occurred.

The formally-documented Conclusion of the Investigation was as follows:

The accident arose as a result of the inadvertent selection of the Emergency/Parking brake instead of the speed brake. The levers are of similar shape and sited close to each other but with a different appearance and mode of action. There is also a brake on indicator light. These risk controls proved ineffective in preventing the inadvertent selection of the Emergency/parking brake both on this occasion and on at least two previous occasions. Once the parking brake had been set there were opportunities to detect and correct the error, but a busy flight deck environment together with a high workload contributed to it going unnoticed.

After touchdown, the aircraft may have remained on the runway surface but for the addition of forward thrust during the landing roll.

The manufacturer stated that it did not intend to conduct a system review relating to the parking brake status.

Safety Action taken following the accident by the aircraft operator was noted as having included an addition to the Landing Checklist to require the PF to confirm that the parking brake is off.

The Final Report of the Investigation was published on 10 January 2019. No Safety Recommendations were made.