On 4 August 2011, a Luxair Embraer 145 flying a STAR into Madrid incorrectly read back a descent clearance to altitude 10,000 feet as being to 5,000 feet and the error was not detected by the controller. The aircraft was transferred to the next sector where the controller failed to notice that the incorrect clearance had been repeated. Shortly afterwards, the aircraft received a Hard EGPWS Pull Up Warning and responded to it with no injury to the 47 occupants during the manoeuvre. The Investigation noted that an MSAW system was installed in the ACC concerned but was not active.

On 4 August 2011, an Embraer ERJ 145 being operated by Luxair on a scheduled passenger flight from Luxembourg to Madrid in day Visual Meteorological Conditions (VMC) when its crew read back a clearance to descend to 10,000 feet as one to descend to 5000 feet, an altitude below both the STAR minimum altitude and the MRVA. The controller did not notice the read back error and when the aircraft was then transferred to the next sector, the controller there also did not notice the error when the crew advised their clearance on first call. An Terrain Avoidance and Warning System (TAWS) ‘PULL UP’ Hard Warning was subsequently activated and recovery followed. There were no injuries to the 47 occupants during this manoeuvre.

An Investigation was carried out by the Spanish Investigation Agency CIAIAC. It was noted that the First Officer had been acting as PF at the time of the Incident and that both pilots were experienced on the aircraft type and familiar with Madrid.

It was found that when the aircraft was cleared to descend to 10,000 feet by the controller in the ACC East Director position using the phraseology “descend to ten thousand feet”, spoken clearly and enunciated properly, the aircraft crew had wrongly read back a clearance to descend to 5000 feet which was not noticed by the controller concerned and was also below the altitude for the STAR being flown (10,000 feet), the MSA on the STAR chart (9500 feet) and the applicable MRVA. Prior to the aircraft reaching 10,000 feet, there was then a change of controller in position with the relevant strip showing a clearance to 10,000 ft. The aircraft was then transferred to the Initial Approach Director on the assumption that it was descending in accordance with the clearance issued. The receiving controller, despite advising the aircraft of “radar contact”, failed to notice the wrong cleared altitude when 5000 feet was given as well as not noticing that the aircraft was below the MRVA. He advised the Investigation that “the aircraft was transferred to him while supposedly descending through 10,000 ft and that there must have been a miscommunication since he asked the (East Sector) controller if he had cleared the aircraft to descend, to which he replied no”. The Investigation noted that “the information obtained from the (East Director) executive controllers and the planning controllers did not yield anything of relevance to the investigation of the event”.

Recorded data showed that when the aircraft was transferred to the Initial Approach controller, it was already below 8000 feet and the advice to the crew of “radar contact” was given with the aircraft descending through an altitude of 7349 feet. The aircraft EGPWS was triggered a little over half a minute later with a Terrain Alert followed about 20 seconds later by a Hard Warning “Terrain Pull Up” to which the crew responded by disconnecting the AP, increased thrust and climbing. The minimum altitude reached by the aircraft was found to have been 6290 ft. The Warning and the response to it was not reported to ATC until responding shortly afterwards to a second transmission to turn right for traffic separation when after acknowledging the instructed radar heading, the crew added “and we’ll maintain seven thousand feet due to mountain”. Subsequently, ATC instructed the aircraft to climb to 10,000 feet. 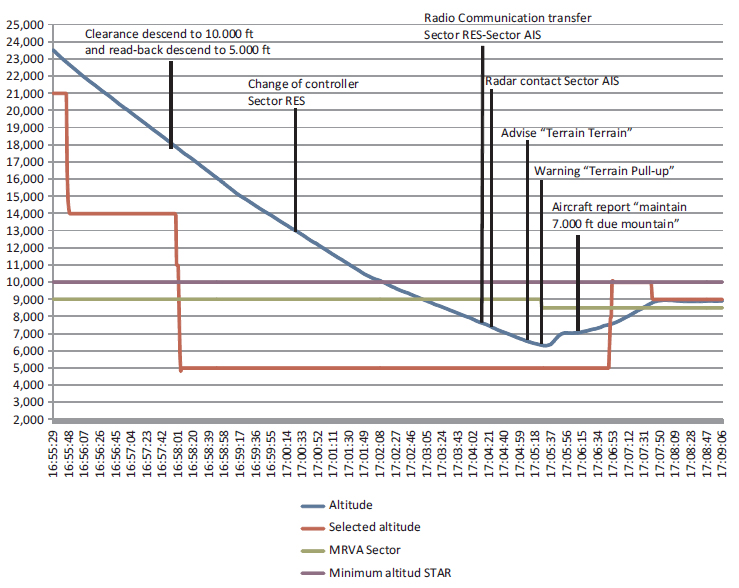 The Investigation did note that:

The formal statement of Cause made by the Investigation reads:

“The incident occurred because the aircraft descended below the minimum standard terminal arrival route, minimum radar vectoring and minimum sector altitudes. The crew, which was obligated to maintain separation with terrain and know that the minimum altitude specified by the arrival procedure was 10,000 ft, descended below said altitude without confirming with ATC whether the clearance given was correct.

The (ACC) sector controller used improper phraseology and cleared the aircraft to descend to 10,000 ft. The crew acknowledged descending to 5,000 ft and the controller did not correct the faulty readback”.

It was also noted that contributing to the incident was “the fact that (the controllers involved) noticed that the aircraft had descended below the minimum altitude in the procedure and below the minimum radar vectoring altitude. The (Initial Approach) controller only realised this fact after being informed by the crew when the aircraft’s EGPWS alerted them and they started to climb.”

It was noted that as Luxair had decided during the Investigation to "revise its procedures, to improve its training and to present this incident internally to its crews as a case study to remind them of the importance of increasing their awareness of altitude restrictions and limitations” a Safety Recommendation to the Operator was not necessary. The Final Report (in Spanish) was approved for publication on 30 January 2013 and subsequently made available in English translation: Final Report (in English).