On 24 May 2010 the crew of a Regional Embraer 145 operating for Air France continued an unstable visual approach at Ljubljana despite breaching mandatory go-around SOPs and ignoring a continuous EGPWS PULL UP Warning. The subsequent touchdown was bounced and involved ground contact estimated to have been at 1300fpm with a resultant vertical acceleration of 4g. Substantial damage was caused to the landing gear and adjacent fuselage. It was concluded that the type-experienced crew had mis-judged a visual approach and then continued an unstabilised approach to a touchdown with the aircraft not properly under control.

On 24 May 2010, an Embraer 145 (F-GUBF) being operated for Air France by wholly owned subsidiary airline Regional on a scheduled passenger flight from Paris CDG to Ljubljana landed with a excessive rate of descent at destination after requesting and gaining approval for a visual approach in day Visual Meteorological Conditions (VMC) which was misjudged and became unstabilised. The aircraft sustained significant although repairable damage but none of the 52 occupants were injured and it was possible to taxi the aircraft to its parking position.

An Investigation was carried out by the French Bureau d'Enquêtes et d'Analyses (BEA). No Investigation was performed by the State of occurrence. Recorded flight data was successfully retrieved and crew testimonies obtained. Both pilots were experienced generally and on the aircraft type and noted as being of identical age - 54 years.

It was noted that the weather conditions had been compatible with a visual approach and also that the Operator had classified Ljubljana, which is situated at an elevation of 1273 feet in a north west/south east valley within steep surrounding terrain, in their Operations Manual Part ‘C’ as an airport requiring a specific self-briefing for pilots before operating there.

It was established that the aircraft was initially being radar vectored for an ILS approach to runway 31 but, during descent to 7000 feet QNH on a heading of 110°, the First Officer who was the PF agreed to a suggestion from the aircraft commander that a visual approach should be requested. The APP controller approved visual positioning and re-cleared descent to 4000 feet. The weather report for the airport, situated at an elevation of 1273 feet with high terrain to the north, was CAVOK.

The PF turned onto left base at an altitude of 6500 feet at approximately 4.5 nm from the threshold of the landing runway 31 and the descent restriction was lifted as the aircraft passed 5500 feet. This turn was made on the basis of advice from the aircraft commander as the PF did not have the runway in sight. The landing gear was lowered and flap 22 selected. The aircraft reached final approach when 2.8 nm from the threshold and at 1709 feet aal (2900 feet QNH). The runway was equipped with a Visual Approach Slope Indicator Systems.

Shortly after this, an Terrain Avoidance and Warning System (TAWS) ‘SINK RATE’ Alert was activated and the First Officer stated that “he was struggling to control the aircraft” so the aircraft commander took over, considering that although the aircraft was high, he “did not feel he was on a particularly steep approach”. Having briefly levelled the aircraft at approximately 800 feet aal between 1.5nm and 0.9 nm from the threshold in order to allow the speed to reduce sufficiently to set the flaps to 45°, he recommenced a high rate of descent which re-activated the EGPWS ‘SINK RATE’ Alert at approximately 640 feet agl. This Alert sounded continuously for 6 seconds until 400 feet agl when it changed to a continuous ‘PULL UP’ Warning for 11 seconds before reverting to a ‘SINK RATE’ alert at 60 feet agl until the system was automatically no longer active at 30 feet agl.

The attempt to touch down involved a “nose-up action (which caused) a significant and rapid variation in the pitch attitude” and then, “at a height of 10 feet, the thrust levers (were) pushed half-way forward and immediately brought back to the idle position”. These actions were not sufficient to prevent the hard landing which occurred at an estimated 1300 fpm with a load factor in excess of 4g followed by a bounce to a second and final ground contact with a load factor of 2.26g.

Contact with the ground was made with a load factor in excess of 4 G and with a vertical speed calculated at -1,300 ft/min. The aircraft bounced and the load factor upon second contact with the runway was 2.26 G. The PF successfully controlled the aircraft trajectory on the runway and then proceeded to taxi to the apron. The Cabin Crew described the landing as “violent”.

The track and vertical profile followed by the aircraft are superimposed on the ILS approach plate taken from the AIP below: 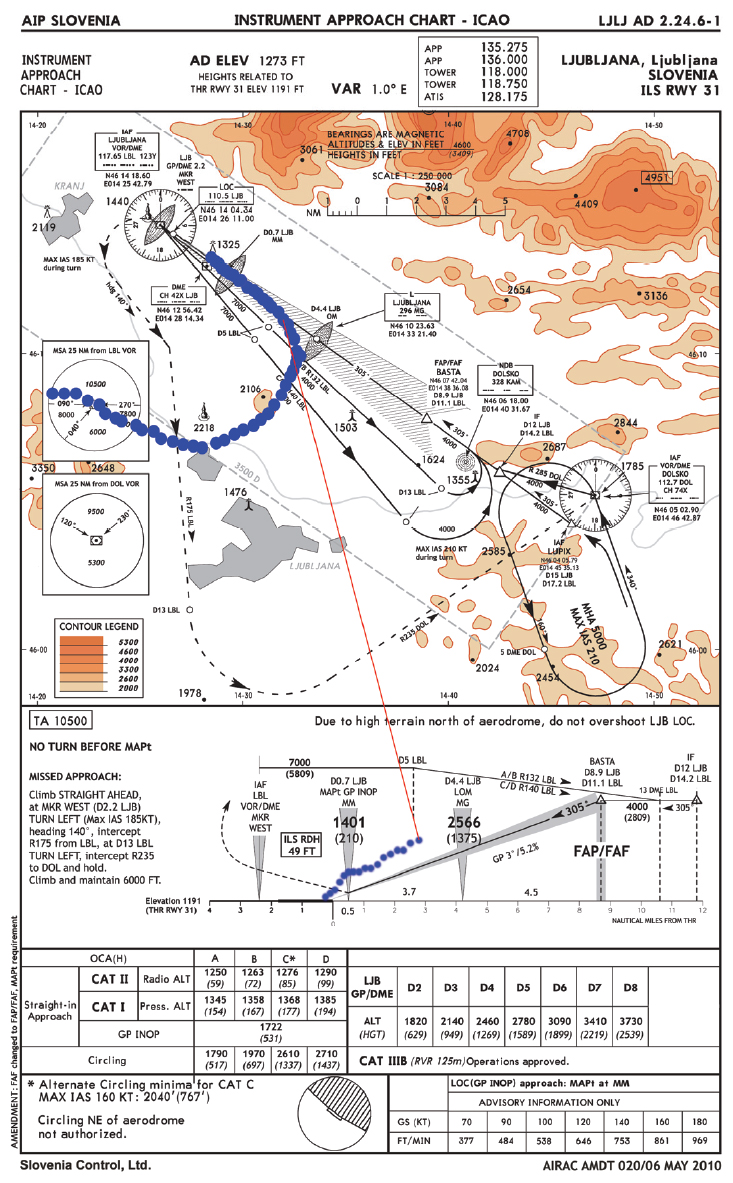 The estimated rate of descent in relation to the height during the final 800 feet to touchdown is show in the diagram below: 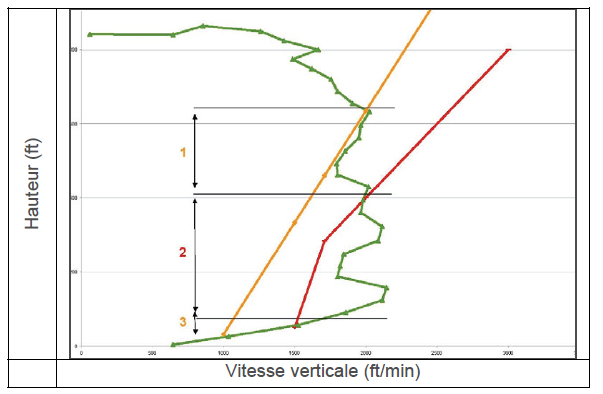 Damage to the bolts attaching the shock absorbers to both main landing gear assemblies was found and both assemblies had to be replaced. The reinforcing plate from the fairings between the fuselage and the wing was also bent and some of its rivets were broken.

A review of the applicable Operations Manual requirements for visual approaches found that visual approaches must be stabilised "at the latest by the MDA of the visual manoeuvre once aligned in the axis of the landing runway”. The applicable MDA for runway 31 at Ljubljana was 2610 feet QNH, equivalent to a height of 1337 feet. However, it was apparent that the approach flown had not been stabilised at any time. At the required stabilisation height, descent was being made at 4° and at 170 knots, 36 knots above the calculated Vapp for the flap 22 then set.

The fact that a go around was never called by either pilot in respect of the unstabilised approach and that there was no response consequent upon the continuous EGPWS ‘SINK RATE’ and ‘PULL UP’ activations below 800 feet agl was attributed to a combination of an over confident commander and a passive First Officer, the latter placed in a difficult situation following the handover of control after the advice given by the former about when to turn base had resulted in arriving on finals much too high and at excessive speed. It was considered that the First Officer had “gradually found himself taking a back seat with regard to the progress of the flight and the seeming ease with which the pilot-in-command took over the controls probably reassured him in his role as an observer”. The failure of the commander to take any notice of the EGPWS was associated with “his experience as a glider pilot and aerobatic pilot (which had) reassured him in his decision to continue to land”.

The formally-recorded Conclusion of the Investigation was as follows:

The crew was authorised to perform a visual approach. The co-pilot decided to turn on base leg too close to the runway taking into account the altitude, which positioned the aircraft in a final approach above the final approach track and with a high conventional speed. Continuation of the unstabilised approach, in turbulent conditions, led to the hard landing.

Overconfidence on the part of the pilot-in-command in combination with the passive attitude of the co-pilot following the transfer of control in the final approach resulted in an authority gradient in the cockpit. In these circumstances, an interruption of the approach was not envisaged by the crew despite the identification of several EGPWS alarms and the stabilisation conditions not being met.

The Final Report of the Investigation was issued in a French language version only on 27 June 2012 and is also available here on SKYbrary in an unofficial English language translation. No Safety Recommendations were made and no Safety Action reported.