On 18 September 2017, an Embraer 145EP made a hard landing at Sittwe on the first of four flights that day. Clearly evident damage from what FDR data showed had been at least a 4.2g touchdown was not noticed during the pre-flight external inspection or during the two subsequent flights. Extensive structural damage was only identified during a routine overnight inspection. It was noted that one of the inspections which failed to detect damage had been carried out by a licensed engineer and that the aircraft Captain had at no stage reported or recorded a suspected hard landing.

On 18 September 2017, an Embraer 145EP (XY-ALE) being operated by Air Mandalay Airlines on a scheduled domestic passenger flight from Yangon to Sittwe followed an unstable approach with a very hard (over 4g) landing. The flight crew did not detect any of the resulting serious wing damage and the aircraft continued in service for three further flights before the damage, which had rendered the aircraft unfit to fly, was discovered.

An Investigation was carried out by the Myanmar Accident Investigation Bureau (AAIB). Data relevant to the Investigation was successfully downloaded from the FDR but that from the 2 hour CVR had been overwritten because it continued to run until the end of the days flying programme when the damage was discovered.

It was established that the aircraft had made a visual approach to runway 11 at Sittwe, making a descending left turn at approximately 500 fpm to intercept final approach at a height of approximately 700 feet and at 138 KIAS. After continuing the descent at the same rate, the aircraft levelled off at 500 feet agl and ALT mode was briefly engaged before, at 0.8 nm from the runway threshold, the AP was disconnected, the thrust was set to Idle and the descent was recommenced. The recorded vertical speed then gradually increased, reaching around 1,300 fpm passing 350 feet agl. Passing 250 feet agl, vertical speed had increase to 1,430 fpm and evidence suggested that successive EGPWS Mode 1 ‘Sink Rate’ Cautions had occurred. The landing runway threshold was subsequently crossed at approximately 150 feet agl, three times the target height, before touch down of at least +4.226G in a right wing down attitude.

During the subsequent turnround, the First Officer was tasked with carrying out the pre-flight external check and he did not observe any indications of damage to the aircraft. A return to Yangon was followed by a flight from there to Tachileik and back. Inspections carried out by a licensed engineer during the Yangon turnround did not detect any damage nor did the Captain’s external inspection at Tachileik. Only when the day’s flying was complete and maintenance personnel at Yangon were carrying out a routine overnight inspection, were multiple cracks found to parts of the right wing of the aircraft. These included a broken right wing spar and a twisted rib (see the first illustration below), separation of the wing skin at its trailing edge and buckling of the wing inboard spoiler. This inspection also found that the fuselage-to-wing lateral fairings on both the left and right hand wings were deformed by buckling (see the second illustration below). The flight crew did not report a suspected hard landing to anybody.

The Primary Cause of the conflict was formally documented as "the pilot continued to a landing despite making an unstabilised approach”. 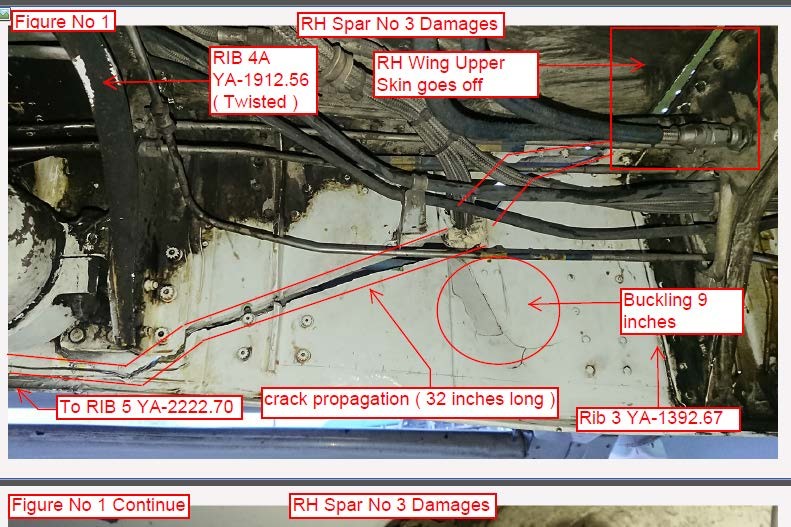 An annotated illustration of the damage caused to the right wing spar. [Reproduced from the Official Report] 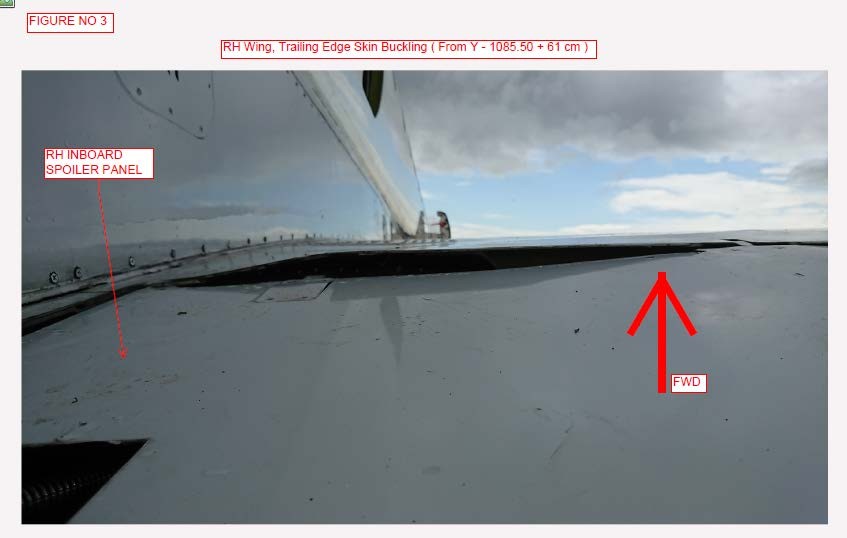 A total of Three Safety Recommendations were made as a result of this Investigation as follows:

Safety Action taken by the unspecified responsible authority was recorded as the publication of an ICAO standard chart for the DVOR/DME Approach to runway 11 at Sittwe.

The undated Final Report of the Investigation was released online during April 2018.