On 8 August 2011, an Embraer 145 was given take off clearance from runway 32L at O Hare in day VMC without the controller making the required check for potentially conflicting arrivals to runway 09R which pass over the runway. When the controller realised that the departing aircraft would conflict with an Embraer 135 approaching 09R, he told his aircraft to stay low and the runway 09R controller to send his aircraft around. Radar data indicated that the 135 on go around had crossed runway 32L about 125 feet above and just over 100 metres in front of the departing 145.

The National Transportation Safety Board (USA) (NTSB) carried out an Investigation. It was established that day VMC had prevailed at the time of the event with overall traffic levels described as light, occasionally moderate. It was noted that the extended centreline of runway 09 intersects runway 32L. It was noted that one of the qualified controllers involved, the TWR North Controller, was acting as an OJTI with a trainee on a skill check operating the position.

It was established that the 135 had been given a landing clearance for runway 9R by the TWR North Controller trainee and advised that that traffic would be departing the same runway prior to his arrival. Shortly after that, the Third TWR Controller, responsible for runway 32L, and for checking that there were no conflicting runway 09R arrivals before giving take off clearances from runway 32L, had issued the 145 with a take off clearance. 1 minute and 20 seconds later, the 145 was called by the same controller with “traffic alert, left to right, it’s an American Eagle stay as low as you can” to which the pilot immediately responded, “Yeah, we’re doing that.” Five seconds after this the TWR North trainee had heard the Third TWR Controller telling him to send the 145 around and had responded with an instruction to it to “go around, climb and maintain 2500, fly runway heading.” Radar data indicated that the 135 on go around had passed about 125 feet above and just over 100 metres in front of the departing 145 taking off from runway 32L.

It was noted that, in addition to the TWR North and Third TWR controllers, a TWR Assist Monitor position was also manned with explicit responsibility for monitoring the intersections associated with runways 09R, 04L, 32R, and 32L at T2. The controller in this position at the time stated subsequently that he regarded the main task to be watching for conflicts between runways 09R and 04L and between runway 09R arrivals and runway 32L departures. He noted that the position had been “created at the suggestion of the NTSB following an investigation a number of years ago” and that it had initially been required to be manned by front line manager, then by a Controller in Charge before, eventually, any qualified controller could staff the position. 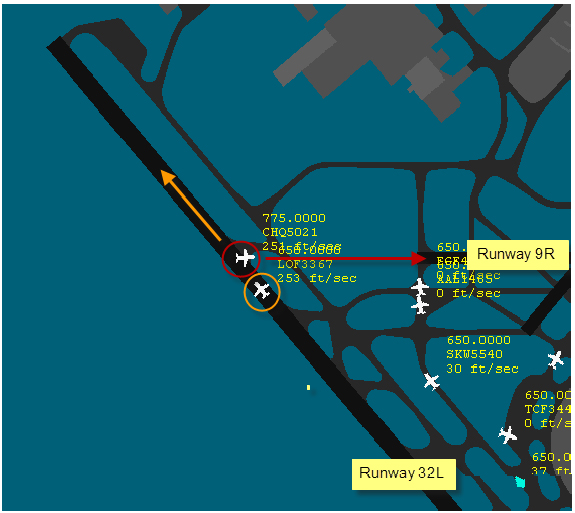 During the Investigation, a number of suggestions to reduce the chances of a recurrence were put forward by the various controllers interviewed. The Investigation documentation does not contain any conclusions on the potential value of those suggestions.

The Probable Cause of the incident was formally determined as:

The improper air traffic control takeoff clearance issued by the (TWR Third) controller because of his lack of monitoring and lack of awareness of the conflicting arrival airplane.

The Final Reports OPS11IA819A and OPS11IA819B of the Investigation were adopted on 7 November 2012. More detail is provided in the Factual Report of the ATC Group Chairman. No Safety Recommendations were issued.