On 29 April 2014, an Embraer E170 being operated in accordance with ATC instructions in smooth air conditions suddenly encountered an unexpected short period of severe turbulence which led both members of the cabin crew to fall and sustain injury, one a serious injury. The Investigation concluded that the turbulence encountered, which had occurred soon after the aircraft began descent from FL110, was due to an encounter with the descending wake vortex of a preceding Airbus A340 which had been approximately 10 nm and 2 minutes ahead on the same track and had remained level at FL 110.

On 29 April 2014, an Embraer 170 (JA211J) being operated by J-Air, a wholly owned subsidiary of Japan Air Lines on a scheduled Japan Air Lines domestic passenger flight from Yamagata to Tokyo Haneda as JAL 1252 briefly encountered sudden and unexpected severe air turbulence during descent towards its destination in day VMC. Both members of the cabin crew sustained injury during consequent falls, one a serious injury and the other a minor injury but there were no injuries to any of the 35 passengers and flight to the planned destination was completed without further event.

An Investigation was carried out by the Japan Transport Safety Board (JTSB). The aircraft was fitted with two CVFDRs. The relevant voice data had already been overwritten because of continued operation but relevant flight data from the recorders was successfully downloaded in support of the Investigation. ATC recorded data was also obtained.

It was established that the flight had been uneventful until the aircraft was descending from its cruise level FL220 and being positioned in accordance with its ATC clearances towards final approach at its destination. After flying level at 11,000 feet with the AP engaged approximately 2 minutes and 10 nm behind an Airbus A340-600 which was also at 11,000 feet and also being radar vectored towards an approach at Haneda, ATC gave a clearance to descend on current track to 8,000 feet and reduce speed to 230 KIAS. Shortly after the Captain had advised the cabin crew that continued smooth flying conditions were expected and that the passenger seat belt signs would be switched on at 10,000 feet, recorded flight data showed that as the aircraft had passed 10,800 feet, it began to be affected by light turbulence. Then, 10 seconds later as it continued descent through 10,600 feet, the turbulence increased markedly and, on account of an uncommanded and increasing roll to the left, the PF disengaged the AP and returned the aircraft to wings level manually. After 10 seconds of this increased level of turbulence, it quickly dissipated and there was no recurrence for the remainder of the flight, which subsequently landed on runway 23.

The Captain had, soon after the turbulence had ceased, asked the senior member of the cabin crew - who had sustained what was subsequently classified as a serious injury - if everything was alright in the cabin, and she had said it was and had not mentioned anything about any injuries to herself or to her colleague when in fact both had fallen in the aft galley area with consequent injury. It was also noted that the Captain, who had been aware of the heavy aircraft ahead, had strongly suspected a wake vortex origin for the turbulence and had, on that basis, made a reassuring PA once it was over.

The Investigation carefully examined all possible sources of the turbulence encountered and, after reviewing meteorological data which showed that very stable high pressure conditions had prevailed, concluded that the disturbance had been caused by the passage of the aircraft through wake vortices generated by the preceding Airbus A340. It was found that the time when the severe turbulence rapidly disappeared could be correlated with the time that the A340, which had remained at 11,000 feet, was turned left towards final approach to runway 22 and thus away from the track which the E170 was continuing to follow as it descended. It was noted that all relevant ATC instructions had taken correct account of the prescribed 5 nm radar separation minimum for aircraft at the same altitude when separated by less than 1000 feet and that the margin beyond this minimum requirement had been significant. 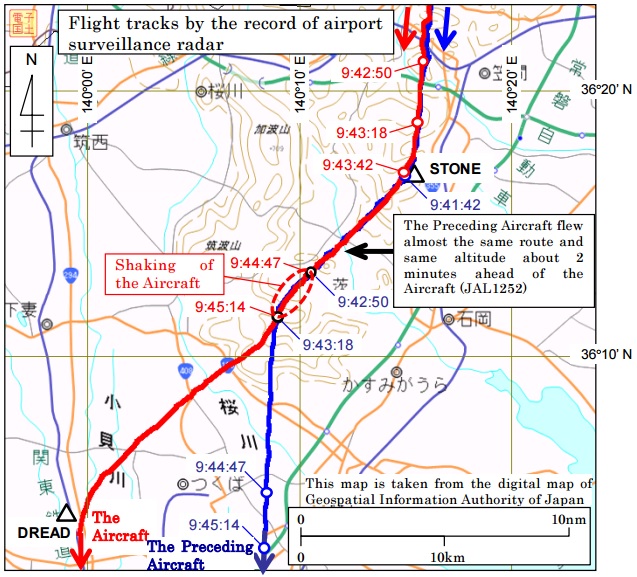 The relative tracks of both aircraft [reproduced from the Official Report]

The Investigation determined that the Probable Cause of the (crew injury) accident was "the (sudden disturbance to the flight path of the aircraft) which occurred when it encountered strong wake turbulence from the preceding aircraft whilst descending which caused both cabin attendants to fall and sustain injury in the aft galley area".

A likely Contributory Factor was identified as "the persistence of the strong wake turbulence that the aircraft encountered for longer than usual because of the stable weather condition with calm wind".

The Final Report was adopted by the JTSB on 8 May 2015 and published on 28 May 2015. No Safety Recommendations were made.