On 13 March 2013, smoke and fumes were immediately evident when the cable of an external GPU was connected to an ERJ170 aircraft on arrival after flight with passengers still on board. A precautionary rapid disembarkation was conducted. The Investigation found that a short circuit had caused extensive heat damage to the internal part of the aircraft GPU receptacle and minor damage to the surrounding structure and that the short circuit had occurred due to metallic FOD lodged within the external connecting box of aircraft GPU receptacle.

On 13 March 2013, an Embraer ERJ170-100LR, being operated by Air France subsidiary Régional into Nuremberg, had just arrived on its gate in normal daylight ground visibility when a routinely connected GPU immediately disconnected and smoke became evident. A precautionary rapid disembarkation of the 77 passengers was accomplished. Minor damage was caused to the aircraft.

An Investigation was carried out by the BFU Germany. Both of the combined voice/data recorders fitted to the aircraft were downloaded and the BEA France prepared a transcript of voice file for the period from just before landing until the end of the recording and this showed that there had been "no unusual incidents".

There was no evidence of anything unusual at or in the vicinity of the external ground power receptacle but (see the diagram below) "the inside was covered by molten material, the connected cables and the circuit breakers located above were covered by soot". The wire bundles above the internal interface with the receptacle "were covered by soot and the insulation of the pipes showed heat damage". 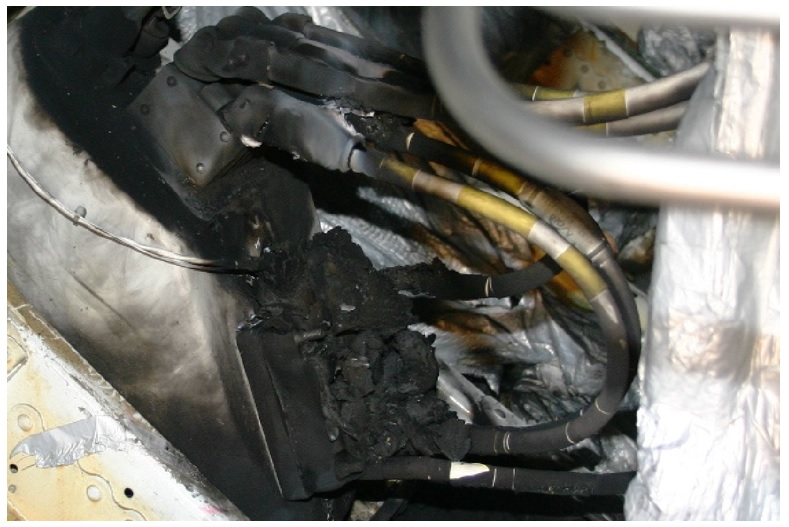 A more detailed examination of the unit found that "the pins, the cable clips and the screw nuts […] for the alternating current phases were molten on the sides facing each other" and the three automatic circuit breakers showed heat damage. Although the housing was fractured, the inside did not show any traces of heat or high current. Insulation panels in the fuselage above the heat-damaged receptacle showed heat damage. The inspection of both the unit and area surrounding it did not find any "traces of open fire".

A Fleet Check of the 25 Embraer jets operated by Régional was carried out by the Operator and it was found that in 13 cases, pieces of metal of various descriptions including washers and bolts were present within the external access to the ground power receptacle.

The response from the BEA France to sight of a pre-publication draft of the eventually-issued Final Report was, for undisclosed reasons "not considered for (incorporation in) the Final Report" and were therefore appended to it as received. The BEA noted that no mention had been made of difficulties which the flight crew had experienced in making contact with ground personnel when the incident occurred - the GPU Operator was no longer present and the airstairs driver had apparently not grasped the urgency of the situation. This was noted to have "made the decision to evacuate more difficult to take" because the flight crew were not fully aware of the external situation. It was noted that the subject of English language competency amongst handling agent personnel was not raised in the Report. It was also noted that "the procedures of Régional require a systematic use of headsets by ground personnel to contact the crew upon arrival at the stand" but that this "was not performed" and that the Report did not make it clear whether ground staff at Nűrnberg airport were trained in "company procedures and standard practices". It was noted, too, that "certification of ground handling companies implies the observance of some standard procedures" and reference was made to the existence of ISAGO Standards Manual in that respect.

Safety Action was taken as a result of the Investigation by Embraer, who on 30 September 2015 had issued SB170-24-0057 which described "how the openings on the upper side of the external power receptacle covers can be closed to prevent short circuits by foreign objects".

The Final Report of the Investigation was completed on 8 December 2015 and released in January 2016. No Safety Recommendations were made.