On 26 May 2007, a Republic Airlines Embraer 170 taking off from runway 01L at San Francisco nearly collided with an aircraft which had just landed on intersecting runway 28R and come to a stop at the intersection. Both aircraft were operating in accordance with instructions to take off and land respectively issued by the same TWR controller. After an AMASS conflict alert issued 15 seconds in advance of the subsequent conflict, the controller involved instructed the aircraft on landing roll to hold ,

On 26 May 2007, an Embraer 170 being operated by Republic Airlines on a scheduled passenger flight from San Francisco to Los Angeles for Frontier AL taking off from runway 01L was obliged to closely overfly an Embraer 120 being operated by Skywest AL for United Express on a scheduled passenger flight from Modesto CA to San Francisco which had just landed on intersecting runway 28R and stopped on the intersection.

An Investigation was carried out by the National Transportation Safety Board (USA) (NTSB) based upon radar and R/T recordings. It was noted that the TWR at San Francisco operates on a single VHF frequency and that the intersection where the conflict occurred was approximately 1860 metres from the landing runway threshold and approximately 1580 metres from the take off runway threshold. Daylight visibility had been good and had not been a factor in the incident. 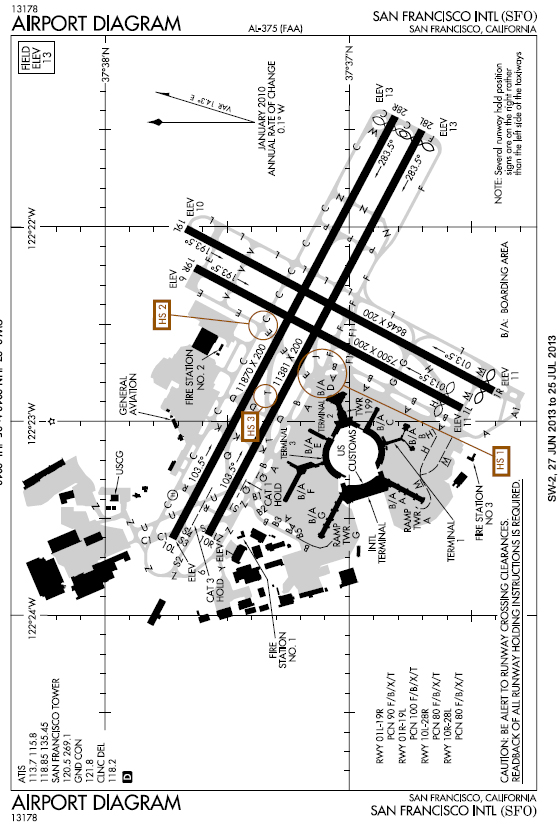 It was found that having cleared the arriving aircraft to land on runway 28R, the TWR controller responsible for both runways had then cleared the other aircraft to take off from runway 01L one second before the arriving aircraft crossed the 28R threshold. In accordance with system design, an Airport Movement Area Safety System (AMASS) alert had been generated about 30 seconds after this at 15 seconds prior to the eventual conflict at the intersection of the two runways. Upon hearing this, the TWR controller had instructed the aircraft on landing roll to “hold, hold, hold” and it had come to a stop exactly on the intersection ahead of the departing aircraft. It was noted that the AMASS system had only been modified to detect potential intersection conflicts just over three months earlier.

The departing aircraft was unable to provide a meaningful estimate of their clearance over the E120. An initial estimate provided in the FAA TWR Report of an estimated 300 feet vertical clearance was shown to have been far greater than had actually prevailed when area radar data was found by the Investigation to show that the E170 was only climbing through 200 feet when less than 500 metres beyond the intersection - more in keeping with the clearance estimate provided by the E120 crew of “30-50 feet”. It was noted, although not relevant to the incident, that the commander of the E120 had been a Training Captain supervising a Captain U/T.

It was stated that the controller responsible for issuing the conflicting clearances had been certified as a San Francisco TWR controller since 1999 and following the incident had been temporarily decertified and retrained before being returned to duty.

The Probable Cause of the event was determined as “failure of San Francisco tower local controller to provide adequate separation between two aircraft departing intersecting runways”.

EDITORS NOTE: In respect of the wording quoted above, it should be noted that as described prior to that quotation, one of the aircraft involved was departing and the other had just landed.

The Final Reports OPS07IA004A and OPS07IA004B were adopted on 30 November 2007. No Safety Recommendations were made and no Safety Action other than the retraining of the controller involved were recorded.