On 27 July 2018, Amsterdam ATC cleared a Boeing 737-800 to line up for departure from an intermediate taxiway but the 737 crew then heard the controller issue a takeoff clearance to an Embraer ERJ190 from the full length of the same runway. Having stopped past the holding point but clear of the actual runway and reported on the runway, they were then given a takeoff clearance, too, but held position. The 190 crew heard the 737 takeoff clearance and rejected their own takeoff, passing clear of the 737 at high speed. The Investigation suggested a review of intersection takeoffs.

A ‘Shortened’ Serious Incident Investigation was carried out by the Dutch Safety Board.

It was established that when already lined up and stationary at the beginning of 45 metre-wide runway 18C, the Embraer 190 had been cleared for takeoff by the same TWR controller who had already cleared the Boeing 737 to line up from the W4 RET. (NB: The difference in TORA between W1 and W4 was 922 metres.) 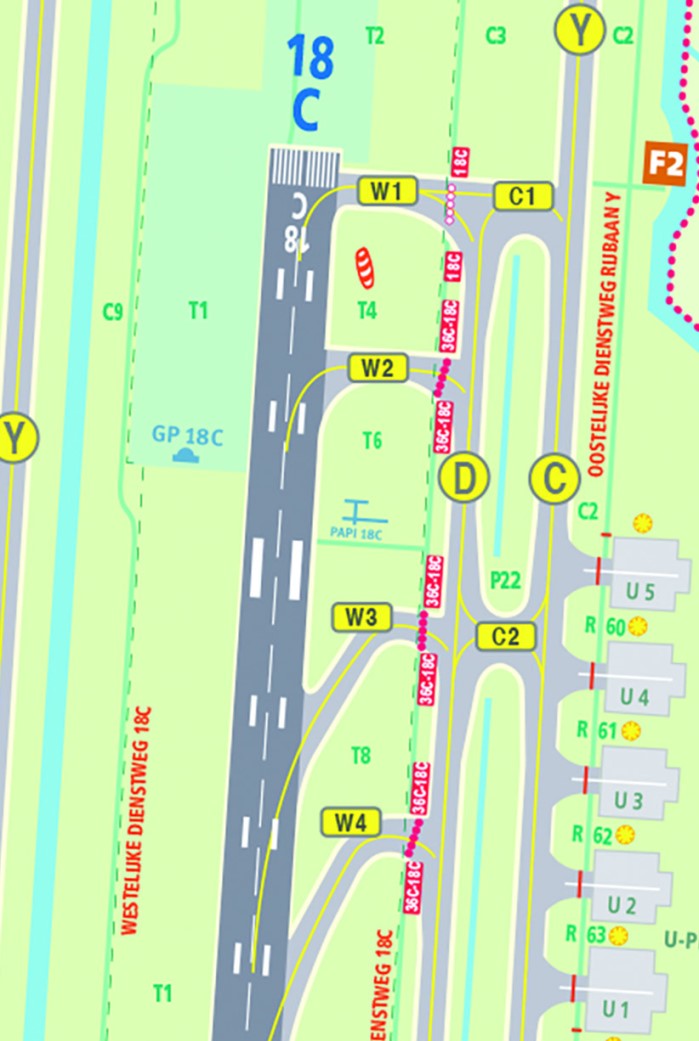 On hearing the 190 being given takeoff clearance, the 737 crew stopped their aircraft beyond the holding point but just before entering the actual runway and correctly reported to TWR that they were “on the runway”. In response, the TWR controller issued a take-off clearance to the 737. The 737 crew ignored this but it was also heard by the 190 crew who had already begun their full length takeoff having previously observed that the 737 was clear of the runway. They therefore commenced a rejected takeoff and subsequently passed approximately 19 metres clear of the 737 whilst decelerating through approximately 85 knots. (NB: Since the runway width was 45 metres, the separation distance given implies either that the 190 was left of centreline or at least part of it was within the actual runway width.) It was noted that the Runway Incursion Alerting System Schiphol (RIASS) had annunciated an aural warning in the TWR only after the E190 had begun its high speed rejected takeoff and had thereby shown that it was “not an effective safety barrier” given that it was only after it had sounded that the TWR controller had cancelled the E190 takeoff clearance.

It was found that at the time of his error, the TWR controller was responsible for three active runways, 09, 18C and 22. Runway 22 was in use for both takeoff and landing and runways 09 and 18C were in use for takeoffs only. He was observed to have “increased his own workload by allowing the GND controller to offer the 737 an intersection takeoff” rather than a full length takeoff behind the 190. It was noted that within the previous half hour, the TWR controller had been involved in two other “occurrences”. Just over twenty minutes beforehand, a light aircraft to which he had given a VFR crossing clearance had failed to follow its instructions which had briefly created a risk to traffic taking off from runway 18C. He subsequently stated that he had been “shocked” by this but after consulting with his supervisor had stated that he was able to continue in position. Then, approximately four minutes before creating the investigated conflict, he had “authorised an aircraft to taxi onto runway 18C via intersection W4, despite the fact that 15 seconds previously, he had issued clearance to another aircraft to take off on the same runway”. In this case, he had cancelled the takeoff clearance immediately after the aircraft to which it had been given read it back.

It was observed that the ANSP involved, LVNL, had “no written rules on whether or not to permit the continuation of work following incidents” and that “these events did have some effect on the mental resilience of the runway controller” when he created the conflict under investigation. It was noted that the internal investigation conducted as a result of the event had “concluded that the use of runway 18C as a runway for departing traffic, in combination with simultaneous use of other runways, can be referred to as an operation with increased complexity”.

The Investigation noted that the only reason why the issue of simultaneous clearances to occupy the same active runway by the TWR controller had not resulted in a potentially fatal collision was “the fact that both crews involved were communicating on the same radio frequency (in the same language) and were able to see each other”. However, in the case of the 737, the use of an RET for an intersection departure had meant that once they had passed the holding point, any crew would have had difficulty in seeing approaching traffic which had begun its takeoff from the start of the runway.

The Conclusions of the Investigation included the observations that:

The Final Report of the Investigation was published on 15 June 2020.