On 6 November 2017, an Embraer E190 cleared for a normal visibility night takeoff at Nice began it on a parallel taxiway without ATC awareness until it had exceeded 80 knots when ATC noticed and a rejected takeoff was instructed and accomplished without any consequences. The Investigation found that although both pilots were familiar with Nice, their position monitoring relative to taxi clearance was inadequate and both had demonstrated a crucial lack of awareness of the colour difference between taxiway and runway lighting. Use of non-standard communications phraseology by both controllers and flight crew was also found to be contributory.

On 6 November 2017, an Embraer ERJ190-100LR (CS-TPV) being operated by Portugalia on a scheduled international passenger flight from Nice to Lisbon lined up on the taxiway parallel to runway 04L and, when cleared, commenced takeoff on it without the TWR controller noticing. By the time he did notice, the aircraft had travelled about 550 metres and was continuing to accelerate above 85 knots at which point he cancelled the takeoff clearance and the aircraft stopped without any consequences. Ten minutes later, the flight departed from the runway and was completed without further event.

An Investigation was carried out by the French Civil Aviation Accident Investigation Agency, the BEA. Recorded ATC data and FDR data were obtained but the CVR data was not preserved even though the Captain stated that he had been aware that the event would be subject to investigation as a Serious Incident as he had “not thought about it”.

The flight departed from its parking stand (position 1 in the illustration below) more than an hour late with a west-facing push-back onto taxiway ‘T’ with the Captain acting as PF. The GND controller then cleared the flight to taxi via taxiways ‘T’ and ‘A’ (position 2) to holding point ‘A1’ for a takeoff from 45 metre-wide runway 04L. The First Officer read back the taxi route but did not mention the clearance limit also given. One minute later and prior to beginning to taxi, the crew requested confirmation of the taxi route which was provided. They then began taxiing along taxiway ‘T’, started the second engine (position 3) and carried out the flight controls check (position 4). As the aeroplane approached the end of taxiway ‘T’ (position 4), the crew reported that they were at holding point ‘A1’ and ready for departure and the GND controller asked them to contact TWR. At this point, the aircraft was actually still 350 metres away from the clearance limit given and abeam a sign which indicated that taxiway ‘A’ was to the left. The GND controller subsequently stated that he had not checked the position of the aeroplane on the ground radar because he was focused on looking out for a police car which he was expecting after a request for police attendance by an inbound flight. 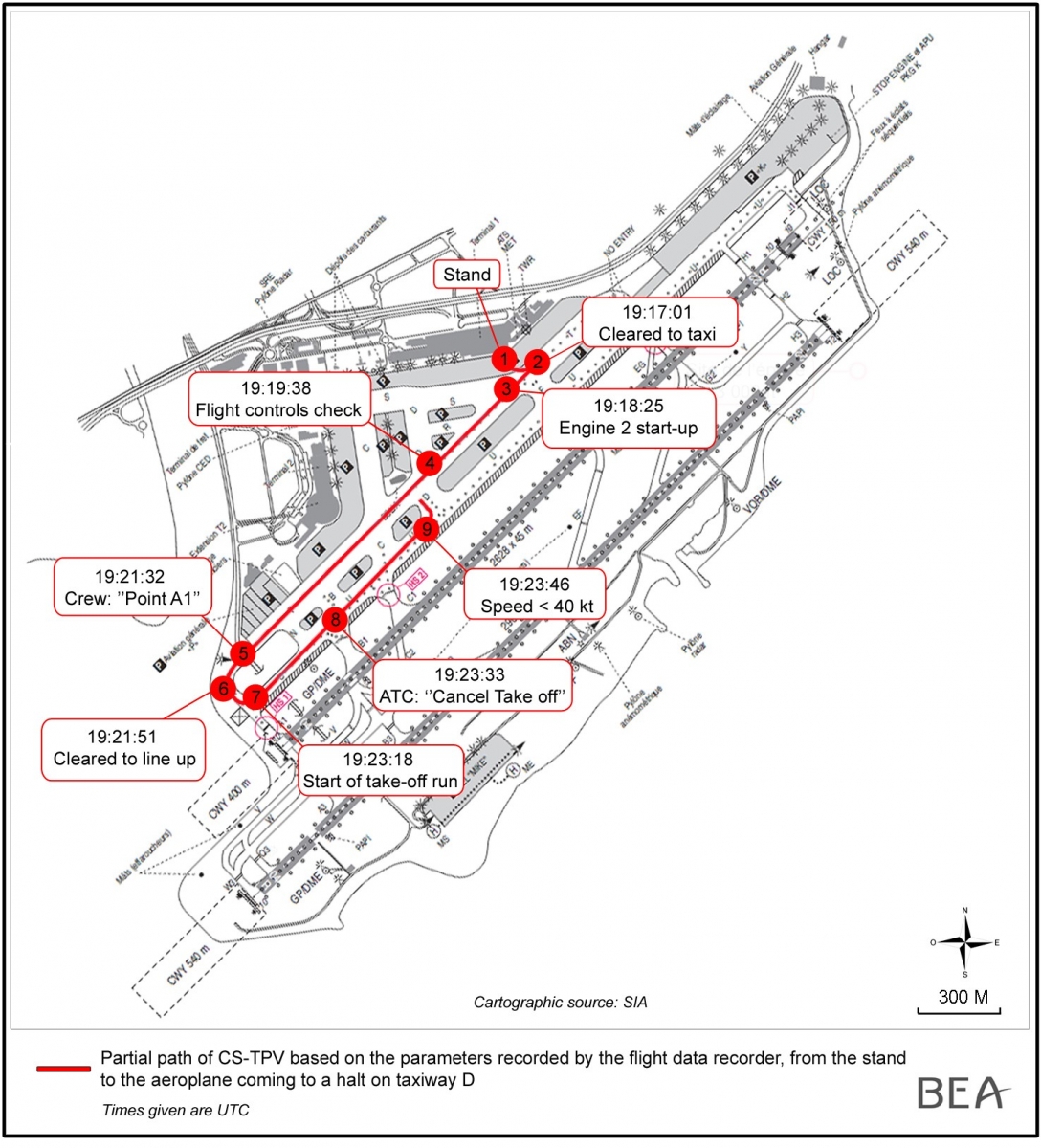 The annotated ground track of the aircraft derived from FDR data. [Reproduced from the Official Report]

On checking in with TWR, the flight crew stated that they were “at holding point A1 for runway 04L, ready for departure” although as previously noted, the aircraft was actually on the bend which links taxiway ‘T’ to taxiway ‘A’ (position 6). In response to their call, the TWR controller cleared them to line up on runway 04L to which two aircraft were on final approach, one with 12 nm to run and another with15 nm to run. The crew read back this clearance correctly and 40 seconds later, they were cleared to “line up and take off from runway 04L”. At this time, the aircraft was on taxiway U (position7). In the absence of a response, the controller repeated the clearance and requested that they make a quick take-off to which he received the response “stand by please” so then asked them to remain at holding point A1. The crew replied that they were on the runway without beginning with the word “negative” to which the controller responded with “OK” and asked them to contact him when they were ready. Soon afterwards, the crew called that they were ready for takeoff and the TWR controller cleared them to line up and make a quick take-off from runway 04L which was read back correctly.

Approximately 20 seconds later (position 8), alerted by a shout from the GND controller who had seen the aircraft accelerating on the taxiway, the TWR controller instructed the aircraft to immediately stop the takeoff as they were on the taxiway. At this point, it had travelled approximately 550 metres from the position where takeoff thrust had been set and had reached a speed “in excess of 85 knots”. The takeoff was rejected as instructed with the speed reaching a recorded maximum of 94 knots before the aircraft began to decelerate. It came to a stop abeam taxiway ‘D’ (position 9) 13 seconds after the instruction to reject had been given after having travelled 922 metres from the position where thrust had been set. Ten minutes later, the flight was again cleared for takeoff which this time occurred in accordance with the clearance given and without further event.

The crew subsequently stated that once they had lined up on what they only later realised was a taxiway, the Captain, who commented that “the lighting had seemed green to him” had asked the First Officer if they were on the runway or the taxiway. After looking outside, “seeing green lighting and believing that taxiways had blue lighting”, the First Officer had “concluded that they were not on a taxiway so had confirmed that they were indeed on the runway”.

The Context for the Error

The Captain’s record of his previous taxi out routes for 04L takeoffs at Nice. [Reproduced from the Official Report]

A total of six Contributory Factors were identified by the Investigation as follows:

Safety Action taken as a result of the event whilst the Investigation was in progress was noted to have included but not been limited to the following:

The Final Report was published in English translation on 2 April 2020 following the initial and definitive publication in French published on 26 March 2020. No Safety Recommendations were made.