On 23 October 2010, an Embraer 190 commenced its night rolling takeoff from runway 01L at Oslo with the aircraft aligned with left runway edge lights instead of the lit centreline before correcting to the runway centreline and completing the takeoff and flight to destination. Engine damage caused by ingestion of broken edge light fittings, which was sufficient to require replacement of one engine before the next flight, was not discovered until after completion of an otherwise uneventful flight. Tyre damage requiring wheel replacement was also sustained. The Investigation concluded that inadequate CRM had been a Contributing Factor.

On 23 October 2010, an Embraer 190LR (OH-LKL) being operated by Finnair on a scheduled international passenger flight from Oslo to Helsinki as FIN658M commenced take off from Runway 01L at Oslo in good night visibility when aligned with the runway edge lights instead of the runway centreline lights and then corrected onto the centreline – all without ATC awareness – and completed the takeoff. ATC were subsequently advised that collision with lights may have occurred and damage was then found. After an uneventful flight, it was found that the right engine had been sufficiently damaged by ingestion of broken light debris to require its removal for repair. Debris-caused tyre damage requiring main and nose gear wheel replacement was also found. 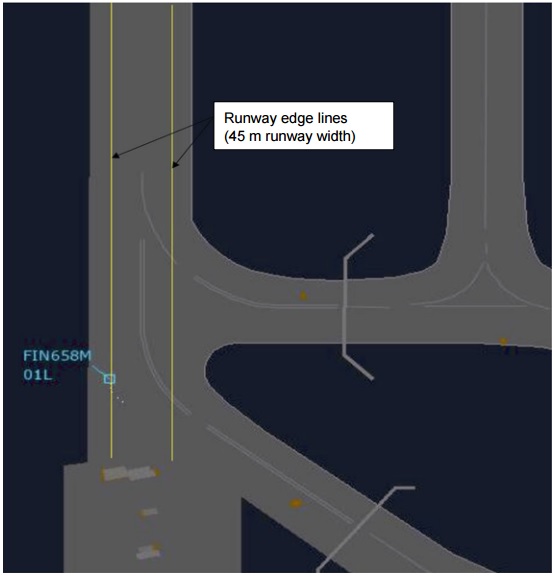 After agreement between the Norwegian AIB (AIBN) and the Finnish Safety Investigation Authority (SIAF), conduct of an Investigation was delegated to the SAIF. Relevant data from the DFDR were successfully downloaded in support of the Investigation. Relevant data on the CVR was found to have been overwritten because it had not been stopped.

It was established that with the Captain as PF, the aircraft had been taxied in accordance with its clearance - which included a line-up and takeoff clearance - from the de-icing area to the departure runway. During the approximately two minutes which this took, the Engine Start, Taxi and Line-up Checklists were required to be completed (the first of these because of the remote de-icing action). There was no FDR evidence to support the completion of the first of these as claimed by the crew but the last item on the Line Up Checklist had been completed before the aircraft entered the runway near its full length - see the diagram below. It was noted that "there are five items on this checklist and while three of them were being done, the head of the co-pilot was down in the cockpit" and that "the same applied to the Captain during the completion of four checklist items". In the absence of the overwritten CVR recording, it was observed that it was "impossible to determine when the checklist itself was read". 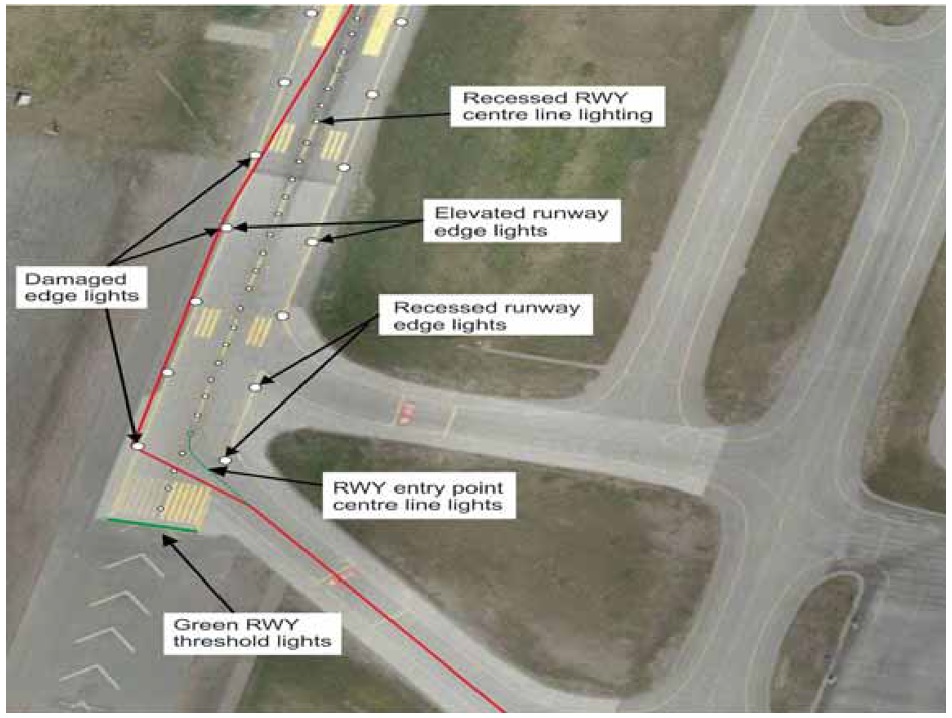 Radar and FDR data showed that without stopping, the aircraft entered the runway, crossed the centreline, aligned with the runway on top of the left runway edge lights and "commenced a rolling take-off......with a slow acceleration". According to recorded surface radar data, it took approximately five seconds to reach the runway centreline once on the runway and then a further 14 seconds to make it to the left edge of the runway and line up in the direction of the runway. It was found that "the take-off run had continued over the left runway edge lights until the fourth light fixture, at which point it became apparent to the Captain that the aircraft was not on the runway centre line". The Investigation was unable to establish how the Captain had recognised this but both pilots reported hearing a "clunk" at almost the same time as the gradual track correction towards the runway centreline had begun. They stated that they "felt that the sound resembled the sound of the nose gear travelling over a recessed centreline light fixture".

The pilots reported that after take-off, they had "concluded that they might have collided with runway edge lights” and two minutes after departure had reported their suspicions to Oslo APP to which they had changed. Approximately half an hour later, Stockholm ACC advised the pilots that runway edge lights had been found damaged. Once TWR were aware, the runway was closed and an inspection was commenced but prior to this, a Boeing 737 had landed on the debris-contaminated section and another aircraft had taken off from the runway, although it had commenced its take-off beyond the area in which broken light debris was subsequently found. The runway was closed for approximately 25 minutes for inspection and debris removal. After this had been completed, with the finding that three edge lights has been destroyed by impact with the aircraft landing gear and remains from them, including substantial pieces of broken glass, had been "strewn across the concrete" surface of the runway, the Finnair flight was informed of the broken runway edge lights. Only debris from one of the damaged lights was kept for the use of the Investigation.

Damage to the inner left main gear tyre attributable to runway light debris was discovered on arrival at Helsinki during a post-landing inspection carried out jointly by the flight crew and maintenance personnel. Similar damage to the right nose gear tyre and damage to the engine was not discovered until later, when the aircraft had been towed to a maintenance hangar in preparation for the wheel change on the main landing gear. The right engine was found to have sustained sufficient damage to its fan blades from ingested light debris to require removal for repair and was replaced. It was noted that this engine damage was only detected during "an extra inspection conducted by an experienced shift supervisor". It was noted that the AMM only requires a visual inspection of engine compressor and turbine parts once every 600 flight hours and otherwise depends on the (outdoor) pre-flight external inspection carried out by pilots. It was considered that the weather and lighting conditions under which such inspections are often performed would inevitably sometimes impact on its thoroughness. One of the damaged fan blades had a 25 mm long crack which, had it remained undetected, "would probably have grown on the following flights" and may well have "resulted in the fan blade failure and major damage to the engine".

The Investigation noted that the crew cross check that the correct runway has been identified is, of necessity, done before entry and therefore does not necessarily support the achievement of correct alignment on that runway after that entry.

Whilst primarily seeking to understand how the pilots involved had lost situational awareness when others in compatible situations did not, the Investigation also looked at the way ATC communications were handled prior to the take-off and concluded that the combined taxi, line-up and take-off clearance given was inappropriate and that "the take-off clearance should only have been issued when the aircraft was approaching the holding position". It was also considered possible that the issue of the combined clearance, together with what was observed to be the rapid rate of speech used to deliver it (which was in excess of 200 words per minute compared to the ICAO Recommendation for a maximum of 100 words per minute) "may have created a feeling of haste" for the pilots even if they did not consciously realise this.

The Investigation also noted the possible contributory effect of the fact that at the time of the incident, all runway markings in Norway were yellow rather than the normal white, which resulted in less contrast when seen against the concrete that made up the runway pavement in the threshold area where the crew had lost their way. It was also noted that the entry to runway 01L followed by the aircraft had been from an angled - rather than a 'standard' 90º - taxiway and that there was an opportunity to re-word the applicable 'Hotspot' text to match that used for a comparable case at an intersection further along the runway.

The consequences of the event in terms of the contamination of the runway by debris were considered. It was noted that the instructions for dealing with foreign object debris at Oslo "instructed all regular workers at the airport to remove or mark and report any foreign object debris" but that they did not "provide for documenting the location of the debris or the items themselves, nor for preserving the debris for the purpose of possible investigation". This situation was in line with Norwegian Aviation Regulations. It was also noted that "according to information from Oslo ATC, air traffic control is not required to inform other traffic of foreign object debris on the part of the movement area which is being used”.

The content of the 2010 Australian Transportation Safety Board (ATSB) Report 'Factors influencing misaligned take-off occurrences at night' was noted by the Investigation as applicable to a number of the issues in the investigated event.

It was concluded that the Probable Cause of the investigated Serious Incident was that the flight crew mistook the left runway edge lights for runway centreline lights while lining up. This resulted in a misaligned take-off over the elevated runway edge lights as well as damage to the runway lights and the aircraft itself.

A Contributory Factor was identified as "Inadequate Crew Resource Management"

Safety Action taken as a result of the investigated event during the course of the Investigation was noted as follows:

Six Safety Recommendations were made upon the completion of the Investigation as follows:

The Investigation also made a number of "Suggestions" based on its findings:

The Final Report of the Investigation was completed on 11 January 2013 and was subsequently made available in English translation.