On 5 October 2016, an Embraer 195 took off at night without clearance as an Airbus A320 was about to touch down on an intersecting runway. The A320 responded promptly to the ATC go-around instruction and passed over the intersection after the E195 had accelerated through it during its take-off roll. The Investigation found that the E195 crew had correctly acknowledged a 'line up and wait' instruction but then commenced their take-off without stopping. Inadequate crew cross-checking procedures at the E195 operator and ATC use of intermediate runway access for intersecting runway take-offs were identified as contributory factors.

On 5 October 2016, an Embraer 195 being operated by Air Dolomiti on a Lufthansa flight from Brussels to Munich as DLH4TX took off in normal night visibility from runway 07R at Brussels as an Airbus A320 being operated by Aer Lingus on a flight from Dublin to Brussels as EIN638 was about to land on intersecting runway 01. The A320 initiated a go around in response to an ATC instruction shortly before touch down. The A320 passed over the intersection of the two runways after the E195 had passed it on its take-off roll.

An Investigation was carried out by the Air Accident Investigation Unit (Belgium) - AAIU (Be). It was decided that "since no accident occurred, the FDRs need not be read out" but QAR data were downloaded and included, along with ATC recorded data, relevant information. By the time the event was reported to the AAIU (Be) relevant CVR data had been overwritten.

It was established that the E195 had left the gate slightly behind schedule and during push-back the crew, aware that they would be departing from runway 07R, had requested departure from the C5 intersection. The GND controller "responded by giving a taxi route leading to the C6 intersection" which was not immediately understood by the crew "due to the rapid speaking tempo" and they requested and received clarification explaining that all 07R intersection departures enter the runway from taxiway C6. Upon reaching the C6 stop bar located at the exit from the 6-way intersection between taxiways C6, C5, E1, OUTER10, INNER10 and Z - see the illustration below - it stopped and, after switching to TWR as instructed, was cleared to "line up and wait" on runway 07R. This clearance was correctly read back after which the "stop bar lights dimmed" allowing the aircraft to proceed. The Captain reported finding the taxiway centreline lights onto the runway "not easy to follow" and being sufficiently "uncertain of their position" to have "asked the First Officer if they were on the runway". The crew stated that "during the line-up, they had had an optimum view of runway 01 and again did not notice any landing light". Once lined upon the runway 07R centreline, aligned on Runway 07R, the Captain asked the First Officer whether they had received take-off clearance and "the First Officer answered positively". 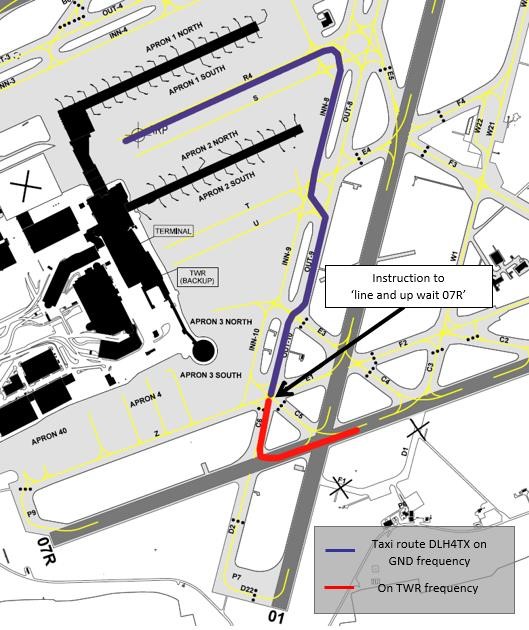 The taxi route followed by the E195 showing where the change to TWR occurred. [Reproduced from the Official Report]

At this time, the A320 was on final approach for runway 01 and, after the E195 had been instructed to line up and wait on runway 07R, it had been cleared to land. According to both the TWR Controller and the TWR Supervisor, traffic at this time was "not dense" and so the TWR Controller was managing both landings on runway 01 and take-offs on runway 07R. It was reported to the Investigation that "specifically for (runway 07R) line-ups from C6, the controller maintains eye contact with aircraft, because of the short reaction time necessary in case of incident" and the controller involved stated that he had maintained a clear view of the aircraft .

The E195 crew confirmed that they had initiated a rolling take-off run as soon as they were lined-up and had not seen the approaching A320. The A320 crew saw the E195 starting to roll and "were about to call ATC when the TWR Controller, who had visual contact with both aircraft, promptly instructed the A320 to go around". The A320 crew responded immediately with FDR data recording a minimum height of 68 feet agl. Their aircraft subsequently passed over the intersection of the two runways about a minute after the E195 had passed it. Their subsequent landing was uneventful.

It was noted that the airport was equipped with an A-SMGCS which includes the generation of warnings when a runway incursion occurs. This alerting system provided a visual alert when the E195 entered the Runway 01 protected area 90 metres from the runway 01/19 centreline which, for the 50 metre-wide runway, was 65 metres from its edge and 4 seconds before it crossed the intersection.

It was noted that the combination of take offs from 07R and landings on runway 01 was a normally-used one and that forecast and actual surface winds at the time favoured this combination. The prevailing winds were light, the tail wind components on runway 25R (only) were in excess of the maximum allowed under the airport's runway designation procedures (7 knots).

The arrangements for intersection take-offs from runway 07R were reviewed and it was noted that, as in the case of the investigated departure, all such departures would require aircraft to enter the runway via taxiway C6. Declared distances for three such take-off positions were provided in the AIP and marked by illuminated signs - see below - and designated as Positions H (for 'Heavy'), PSN 1 and PSN 2. No explicit mention of "PSN 2" was made to the departing E195. 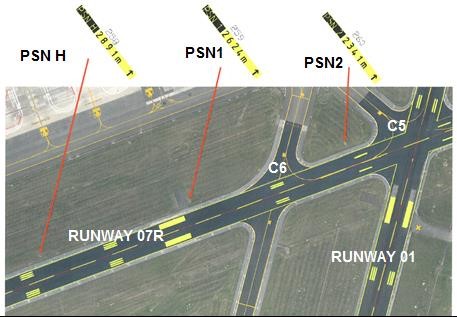 The existence of similar 'take-off without clearance' events was noted and summaries of some events of this type included in the Accident and Incident cases held in SKYbrary were listed. Six other similar occurrences at Brussels, not necessarily of the same relative risk, were found to have been recorded over the 5 years to November 2016.

A number of sources of information on the risk management of runway incursion were identified including:

It was noted that Chapter 4 of ICAO Doc 9870 makes recommendations for the prevention of runway incursions which include:

It was observed that although the use of Simultaneous Intersecting Runway Operations (SIRO) "may serve to increase traffic efficiency, shorter approach tracks and taxi routes for example, there are inherent risks associated with (this practice and) strict procedures must be in place to prevent a runway incursion". However, the Investigation took the view that it should not consider the decision to use SIRO rather than other potentially viable alternatives and therefore confined its analysis to the safety issues associated directly or indirectly with SIRO.

A number of aspects of the event were discussed in the Investigation's analysis including:

Whilst the available evidence did not enable a meaningful attribution of 'human factors' which might have led both E195 pilots to unintentionally take off without clearance, it was considered that had the ATC instruction to “Line up and wait Runway 07R” been supplemented by additional information, such as a location or a warning of incoming traffic, "it would have increased the situational awareness of the crew and increased the probability that the instruction would have been retained".

The Air Dolomiti Operations Manual was found to not adequately address the need for positive confirmation of ground clearances by both pilots and as such made it more likely that a pilot - in this case the senior pilot - would be content to take the advice of the other pilot when uncertain rather than initiate clarification from ATC.

Even though the controller reacted quickly to the situation, since it took only 5 seconds for the E195 to reach the intersection from the moment it started to accelerate for the take-off, it may not have been possible to prevent a collision at the intersection if the A320 had already touched down.

Consideration of the taxi routing to and through the 6-way intersection to reach the required C6 access for an intersection departure from runway 07R led the Investigation to conclude that both taxiway layout and taxiway naming were unduly complex and capable of creating an avoidable increase in workload for pilots not familiar with the airport or departures from a particular runway. The oblique intersection of taxiway C6 with runway 07R meant that a 120° turn was required to reach "PSN 2" which for that manoeuvre only was contrary to commonly accepted practice for runway access. The prevailing situation in both respects was compared to recommended practices in ICAO Annex 14, the EAPPRI, the ACI Runway Safety Handbook and the EASA specifications for Aerodrome Design (CS-ADR DSN) and found to be not in accordance with them to varying degrees. Some suggestions which could reduce complexity were made.

The variation in the way that the risk classification systems applied to runway incursion events produced a measure of relative risk for particular events was discussed and it was noted that their outputs were not consistent with the less prescriptive guidance on what constituted a 'Serious Incident' according to Annex 13. It was noted that such a difference "is not a pure administrative matter, but also triggers a different response by the stakeholders involved" and thereby influences the level of scrutiny of the circumstances which prevail.

The Cause of the investigated event was formally documented as "the take-off without clearance of an aircraft instructed to 'line up and wait' on Runway 07R while an aircraft was in final approach of Runway 01".

Safety Action taken during and known to the Investigation as a result of the event included the following:

Four Safety Recommendations were made as follows:

The Final Report of the Investigation was issued on 27 March 2017.