On 14 January 2014, the experienced pilot of an EC 135 HEMS aircraft lost control as a result of a collision with unseen and difficult to visually detect power lines as it neared the site of a road accident at Sollihøgda to which it was responding which damaged the main rotor and led to it falling rapidly from about 80 feet agl. The helicopter was destroyed by the impact which killed two of the three occupants and seriously injured the third. The Investigation identified opportunities to improve both obstacle documentation / pilot proactive obstacle awareness and on site emergency communications.

On 14 January 2014, the crew of an Airbus Helicopters EC135 P2+ (LN-OOI) being operated by Norsk Luftambulanse from its base at Lørenskog to the site of a road traffic accident at Sollihøgda in day Visual Meteorological Conditions (VMC) failed to see a power line whilst descending to land near the accident and after main rotor damage was sustained during unintended contact, the helicopter descended rapidly to the ground out of control. Two of the three occupants were killed and a third seriously injured due to the severe impact. The helicopter was completely destroyed and slight damage was caused to a car which was hit by one of the severed power lines.

An Investigation was carried out by the AIB Norway. No Flight Recorder was carried - or required to be carried - on the accident helicopter but a number of high definition video recordings shot by people on the ground were made available. Also, the Non Volatile Memory in the Moving Map system installed in the helicopter which recorded, at frequent timed intervals, heading, speed, height agl and altitude amsl was successfully downloaded by the Operator.

The 52 year-old helicopter pilot had been flying for Norsk Luftambulanse since leaving the Air Force, where he had been trained as a helicopter pilot, in 1991. He had been based at Lørenskog since 2001 at which point he had been appointed Flight Operations Manager, a post he had continued to hold until 2010. Since then, he had continued to act as an instructor and test pilot for the Operator. He had a total of 1382 flying hours on the accident type and over 6000 hours in total.

The accident helicopter and three man crew were at their base at Lørenskog when they were called to attend a road traffic accident involving an overturned truck at Sollihøgda, which was approximately 21 nm to the west. En-route, the physician on board received the accident site coordinates from the emergency medical communication centre and the HEMS crew member occupying the left hand front seat set a course for the position in the onboard digital map system so that it was displayed on the MFD. Flying conditions were adequate for flight by visual reference in uncontrolled airspace and an altitude of 2000 feet Altimeter Pressure Settings was maintained for most of the flight. In line with normal practice no contact was made Oslo ATCC and no Fight Plan was filed. It was not possible to establish radio contact with personnel at the accident site. Although all crew members were generally familiar with the area, a check of the landing site environment on the moving map disclosed wires across it.

After a ten minute flight, the helicopter arrived overhead the scene. The pilot reduced speed to 50 knots and flew slightly south of the site in a south-western direction at approximately 800 feet agl (equivalent to 1 460 feet QNH) so as to identify a suitable landing site. None of the crew noticed anyone on the ground attempting to visually indicate one (although in fact a police officer was attempting to signal visually) and there was still no radio contact with anyone on the ground. After deciding to land in a layby on the road near the southern exit of the Ness tunnel (see the annotated site picture below), the helicopter began a descent to 80 feet agl, initially continuing in a south-westerly direction before making a wide right turn to track in the opposite direction towards the chosen landing site.

At this stage, the only survivor, the HEMS crew member stated that he had switched the MFD from Map to Flight Instrument mode and then concentrated on the radio altimeter readout. The helicopter was flown horizontally and sideways very slowly to the left whilst the pilot inspected the area. As they approached poles with a line between them, the HEMS crew member opened his door so as to look down and check that there was adequate clearance from them. He reported that just as he closed the door and looked forward again, "he heard a bang and the helicopter started to shake severely" and so "as they started to drop, he gripped the door handle with one hand and the lock on the seat belt with the other" that in the case of fire, he would be able to get out quickly. However, the impact was so severe - the rate of descent was subsequently estimated to have been around 3600 fpm - that he had lost consciousness. 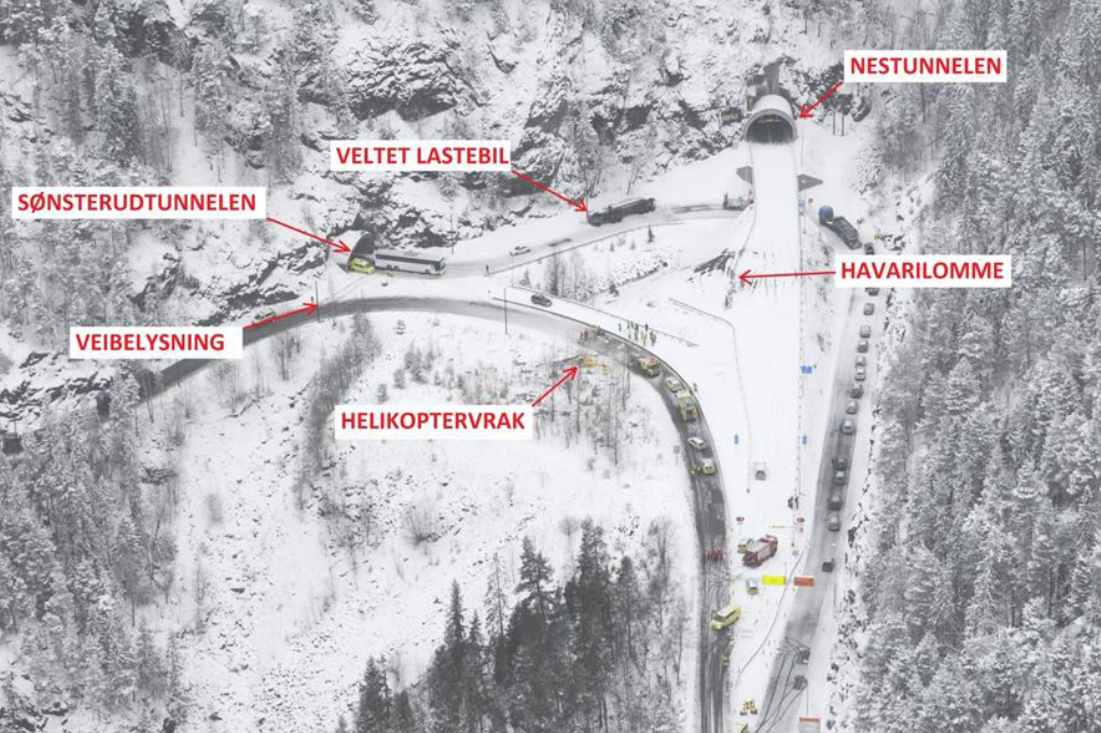 Video evidence confirmed that the helicopter had hit the 22 kV power line marked on the moving map which consisted of three live lines and a grounded line that crossed directly above another line between the street lamp posts which was not indicated on the moving map. Some "powerful flashes" occurred as the main rotor blades came in contact with the live wires and, as all lines were cut, the helicopter started to fall straight down, hitting the ground less than 3 seconds later with the forward left section leading. It was observed from the video recordings that during the fall the remains of the main rotor had begun to "shake heavily in relation to the helicopter fuselage" and before ground impact, it was possible to see that "the main gear box and main rotor were about to come apart from the fuselage". 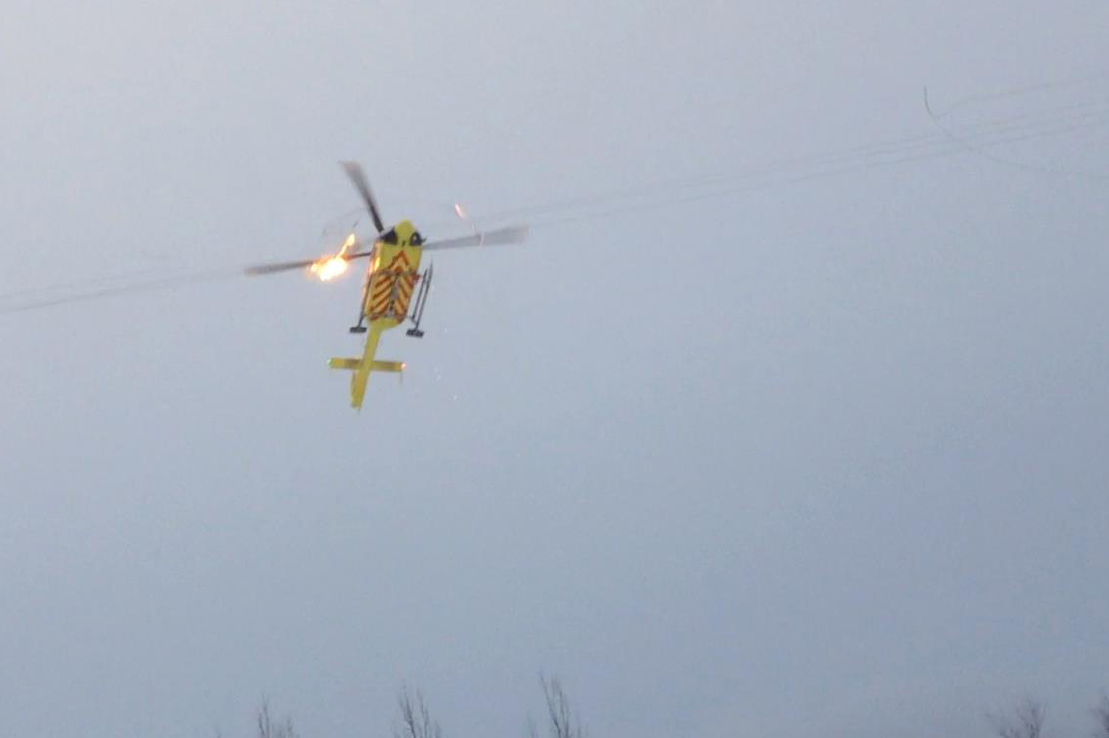 The fact that the helicopter was fitted with a series of wire cutters did not provide a complete defence against inadvertent wire strike. Although a wire which passes below the lowest knife would also pass under the skids, one which passes above the uppermost knife could hit the main rotor - which is what happened in this case. It was noted that "according to Airbus Helicopters, the system is designed so that it is efficient at speeds between 13 and 52 knots". The power line wires were found to consist of an aluminium outer covering with an overall diameter of 10.5mm which enclosed a steel core 5mm in diameter. It was not physically marked to prevent aircraft collisions. 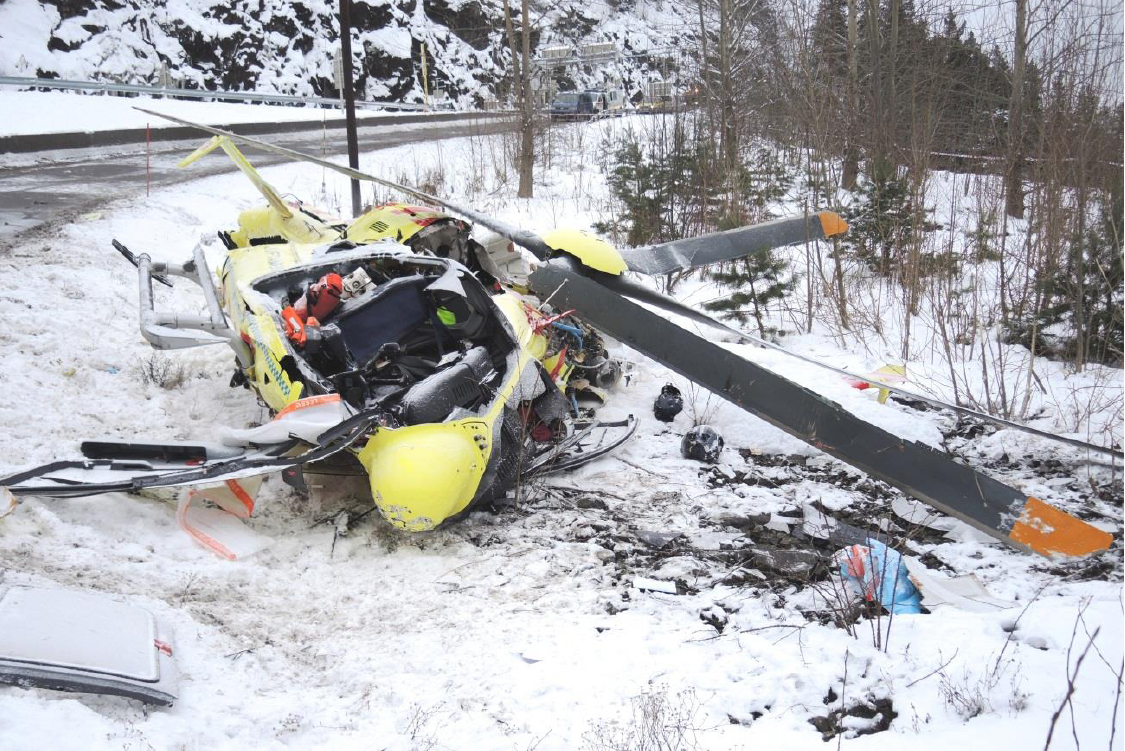 The Investigation noted that because the course of events had been well documented, the accident was simple to explain:

"During approach for landing, the helicopter flew into a power line that destroyed the main rotor. Thus, it was no longer possible to control the helicopter, and it fell almost vertically and hit the ground with substantial force. The accident took place during a highly ordinary mission with a very experienced crew in weather conditions that should not pose problems. The chosen landing site was seemingly very suitable, but the crew did not detect in time that a power line ran across the final part of the approach."

However, it was noted that "only when looking beyond the completely obvious cause and effect can you see that the accident is more complicated" and so an analysis of underlying safety-related factors was carried out "because it can form the basis for lasting improvements that can help prevent similar accidents in the future".

This analysis was particularly concerned with why the power line was not detected. It was concluded that barriers that could potentially have prevented the threat this power line represented, were not functioning or were missing when the accident occurred:

In this connection, the analysis also considered deficient visual detection and why the moving map with built in obstacle warning was ineffective. It also examined opportunities for improvements in maps and warning systems and in communications between helicopter occupants and ground personnel at landing sites. In particular it was found that "the current national register of aviation obstacles was incomplete and not wholly compatible with Global Positioning System (GPS)-based warning systems".

Finally, the Investigation identified a need for Norsk Luftambulanse - which had been operating since 1991 without a fatal accident - to take action to ensure that, whilst too much prescription was not appropriate for the task variety typical of a VFR HEMS operation, harmonisation of single pilot 'process' was actively pursued.

The formally documented Conclusion of the Investigation was that "the accident occurred because the helicopter collided with a power line during approach, which caused such extensive damage to the main rotor that it fell vertically down from an altitude of approximately 25 metres" and that "the impact with the ground was so severe that two of the crew members died and one was seriously injured (and) the helicopter was a destroyed".

Safety Action taken during the course of the Investigation included the completion of the Operator's own internal investigation which made 13 safety recommendations covering both internal matters and other, external, issues which were beyond the Operator's control. A number of recommendations related to standardisation of VFR operating procedures in respect of approaches to unknown landing sites. These covered reconnoitring, communication, visual verification of aviation obstacles and the need for a sterile cockpit concept in the final part of the approach. Improvements in the provision of information about obstacles on digital maps, power line detection systems and in communications, training and the reporting of non-conformities were also the subject of recommendations, as were proposals to limit the extent of damage and simplify accident investigation, for example by the introduction of improved flight-following and the fitting of future helicopters with both a CVR and an FDR.

The Final Report of the Investigation was published on 16 June 2015.