On 20 January 2015, The APU of a Fokker 100 being routinely de-iced prior to departing Nuremburg oversped as a result of the ignition of ingested de-icing fluid in the APU. This led to its explosive uncontained failure as the result of which ejected debris entered the aft cabin and smoke occurred. No occupants were injured and all were promptly disembarked. The Investigation found that the de-icing contractor involved had not followed manufacturer-issued aircraft-specific de-icing procedures and in the continued absence of any applicable safety regulatory oversight of ground de-icing activity, corresponding Safety Recommendations were made.

On 20 January 2015, a Fokker 100 being operated by Helvetic Airways was being de-iced prior to departure on a passenger flight from Nuremburg to an unrecorded destination in normal day visibility with the APU running when the Type 1 de-icing fluid being used entered the APU air intake. A loud explosion which ruptured the APU followed and a piece of ejected debris accompanied by an “explosive flame” hit and penetrated the aft passenger cabin and “smoke” occurred. There were no occupant injuries as a result but the aircraft sustained “severe” damage. 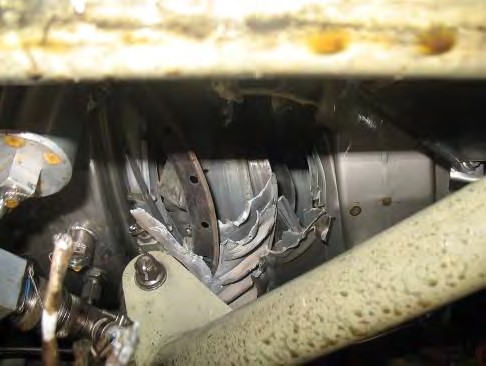 The destroyed APU. [Reproduced from the Official Report]

An Investigation was carried out by the German Federal Bureau of Aircraft Accident Investigation. Data from the FDR and the CVR were made available to the Investigation but were not used to determine the cause of events.

It was established that the de-icing task had used the Type 1 fluid branded as Safewing MP 1 1938 ECO (80). It had commenced with the wings and the left hand side of the empennage after which the de-icing vehicle was re-positioned to the right hand side between the engine and the empennage. The right horizontal stabiliser was de-iced first and the spray operative’s basket was then moved to allow the right side of the vertical stabiliser to be treated. After beginning to spray the vertical stabiliser just above the APU air intake, the APU rpm was observed to suddenly begin to increase and a loud bang accompanied by a blast wave which was sufficient to rock both the de-icing vehicle and the aircraft followed. As the spray operator ceased spaying and took cover in the basket, a second louder bang and blast wave occurred and the APU automatically shut down. When these bangs occurred, the driver of the de-icing vehicle stated that he had seen the APU maintenance access door spring open and an explosive flame about two metres long appear. The flight crew heard the bangs and simultaneously observed indications that the APU had automatically shut down.

A piece of the APU compressor disc ejected during the explosion was subsequently found to have breached the aircraft rear pressure bulkhead and entered the aft cabin below the seat position assigned to one of the two aft-stationed cabin crew (see the illustration below) entering the locker holding crew personal emergency equipment for that seat position. It briefly caused “smoke” in the area and passengers were moved to the front of the cabin which was free of smoke before being later disembarked to buses which returned them to the terminal building. Other small pieces of the APU were found beneath the tail of the aircraft and the APU housing was torn open so that it was possible to see that the turbine wheel was severely damaged and the compressor wheel shattered. 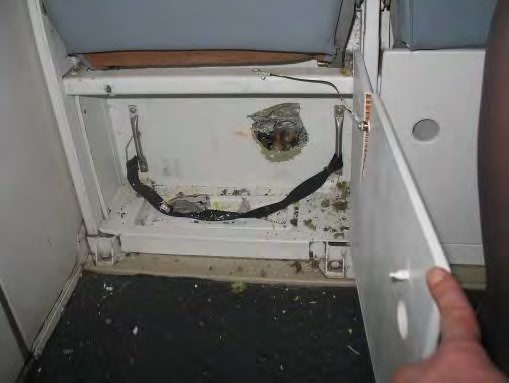 The breached bulkhead below the cabin crew station seat - note the fractured piece of compressor disc at the bottom of the opened access beneath the stowed seat. [Reproduced from the Official Report]

It was noted that in the total absence of any EASA Regulations or guidance in this area, the personnel the de-icing contactor involved had been trained generically in accordance with the AEA ‘Recommendation for De-/Anti-Icing’ 29th Edition July 2014 and the AEA ‘Training Recommendations’ 11th Edition August 2014 which were current at the time and prepared by the AEA’s industry-recognised specialist group.

Note: By the time this Investigation had been completed, the AEA had ceased to exist and the work of its specialist ground de/anti icing group has not continued.

It was found that required procedures for de icing the aircraft type were provided in the corresponding AOM and AMM. However, as a matter of widespread common practice, these aircraft type requirements were not accessed by the contractor. However, the spray operator was aware that de-icing fluid must not be allowed to enter APU air intakes and had sought to avoid this. However, it was concluded that the reason for the autonomous increase in APU rpm had been the ignition of the flammable-when-compressed ingested fluid. It was found that other aircraft types with a similarly-positioned APU air intake either required that the APU be shut down during de icing or required that it should be clearly marked as a reminder to de-icing personnel of fluid ingestion risks.

The occurrence of previous uncontained APU failures during de-icing of US-operated Fokker F28 in 2001 and a US-operated Fokker F100 in 2002 were noted, in particular the fact that in the 2002 F100 case, a piece of the ejected debris entered the same cabin crew under-seat locker as in this latest case, albeit the source was the turbine disc rather than the compressor.

The Final Report was completed on 31 January 2018.