On 6 April 2016, a Romanian-operated Fokker F28 overran the runway at Gällivare after a bounced night landing. There were no occupant injuries and only slight aircraft damage. The Investigation concluded that after a stabilised approach, the handling of the aircraft just prior and after touchdown, which included late and inappropriate deployment of the thrust reversers, was not compatible with a safe landing in the prevailing conditions, that the crew briefing for the landing had been inadequate and that the reported runway friction coefficients were probably unreliable. Safety Recommendations were made for a generic 'Safe Landing' concept to be developed.

On 6 April 2016, a Fokker F28 (YR-FZA) being operated by Romanian airline Carpatair on a scheduled Swedish domestic passenger flight being made under a national government-funded public service scheme from Arvidsjaur to Gällivare for Nextjet as flight 4856 just overran the end of the destination runway following touchdown off a night ILS approach to runway 30 in normal ground visibility. There were no injuries to the 55 occupants and only slight damage to the aircraft. 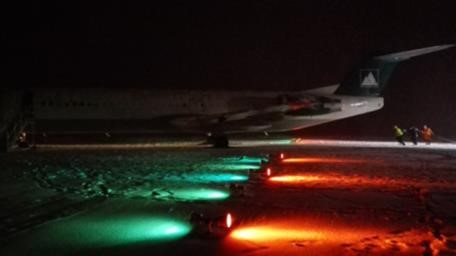 The aircraft after the overrun. [Reproduced from the Official Report]

An Investigation was carried out by the Swedish Accident Investigation Authority (SHK). DFDR and 2-hour CVR data were recovered and a record of aircraft communications with the Gällivare FIS Officer on duty at the time was also available.

It was established that the flight had originated at Stockholm Arlanda where the flight crew had carried out their pre-flight planning for both the flight to Arvidsjaur and the flight from there to Gällivare. This pre-flight planning disclosed that at that time, "there was snow and rain at the (final destination) airport with a temperature of 1°C and light north-easterly wind" but that runway braking action was "good". The forecast received at that time "indicated that snowfall would temporarily intensify" and this meant that snow clearing was almost continuously in progress at Gällivare whilst the aircraft was en route there until approximately ten minutes before the landing.

The crew performed an approach briefing for an ILS approach to the 1,714 metre-long and 45 metre wide runway 30 at Gällivare. The intention to use full flap (42°) and fully extended speed brakes for touchdown was covered but contrary to the applicable SOP, there was no mention of runway performance issues or other procedures or decision points which were especially relevant to such a short runway. The final weather and runway report passed to the aircraft by the AFIS operator whilst "the runway was still being swept" gave the wind velocity as 010°/5 knots, the prevailing visibility as 1500 metres in snow and rain, the vertical visibility as 800 feet, the temperature 0° and the Dew Point -0° with "braking action 36, 34, 35" in 1mm of slush.

With the Captain as PF, the crew reported having gained visual acquisition of the runway at about 500 feet and then disconnecting the AP. DFDR data showed that an essentially stable approach had been flown but the aircraft had crossed the runway threshold at 50 feet and at 134 KIAS - the applicable Vref +12. The latter was contrary to the Operator’s OM procedure for short runways which prescribed Vref over the threshold. This excess airspeed had not then reduced "probably due to a late thrust reduction to flight idle" and there was one bounce "probably caused by an insufficient flare and high speed" before the aircraft settled onto the runway. DFDR data then showed that reverse thrust, which short runway procedures specified should be selected both without delay and straight to the maximum available at 95.5% N1, was not selected until "about 20 seconds after touchdown and at a speed of about 50 knots" and when it was, the selection was only partial and the N1s remained between 65% and 75%, which is within the marked time-limited 'restricted zone' that exists between 57% and 75% N1, for more than the permitted elapsed time. The effect of this partial and delayed reverse selection meant that "the effect of the reverse was almost absent". DFDR data showed that above 50 knots, longitudinal acceleration "averaged -0.07 g" which indicated that the wheel brakes were having no effect. However, it was not possible to determine whether this lack of deceleration was due to the absence of brake application or to the runway friction coefficient being lower than measured and reported. In this connection, it was observed that the aircraft operator's runway performance data indicated that at the prevailing ELW of 34 tonnes, the aircraft could still have stopped on the runway if handled normally with actual runway friction coefficients as low as 0.20.

The eventual overrun occurred at low speed into snow and the aircraft stopped within the runway strip with the MLG wheels just over 6 metres beyond the end of the paved runway surface. The crew quickly determined that an emergency evacuation was not necessary and the passengers were so advised in both Swedish and English by the Senior Member of Cabin Crew and the Nextjet Customer Service Representative. Ground personnel subsequently arrived with a set of steps and passengers were "disembarked and transported to the airport building". Damage to the aircraft was limited to the tyres and to the engine fan blades, the latter due to the elapsed time within the restricted rpm range exceeding the maximum time allowed. 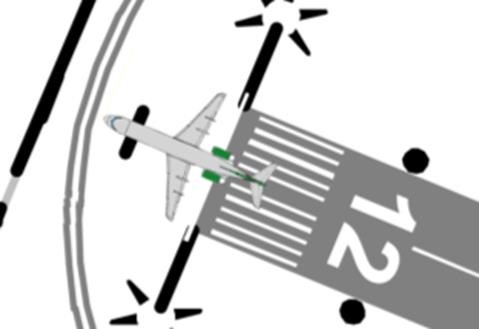 The position of the aircraft in its final stopping position. [Reproduced from the Official Report]

In respect of the measured runway braking action (µ) and its effect on runway deceleration, the Investigation noted that there is no way to establish a clear correlation between 'reported µ' as measured by ground equipment and 'effective µ' which results from the interaction between the tyres and the runway surface which is dependent on tyre pressure, tyre wear, wheel speed, aircraft speed, aircraft weight and anti-skid system efficiency. The consequence of this was "that it is not appropriate to use only 'reported µ' to calculate landing performance". It was noted that with only 1mm of 'frozen deposits' on the runway, the runway slush did not meet the global definition of 'contaminated' and so friction measurements would not necessarily be unreliable on that basis. However, it was pointed out that the extensive review of runway braking action during winter operations published by the AIB Norway in May 2011 had concluded that braking coefficients measured when there are only small differences between the temperature and the dew point as was the case at the time of the investigated overrun "are not reliable". This same report also stated that "reverse thrust represents approximately 20% of the total available braking force when braking on a slippery runway". Given that the Investigation found that the effect of reverse thrust use in the investigated overrun had been minimal and that there had been little effect from wheel braking, the loss of 20% of potential deceleration would have been particularly significant. Nevertheless, from an airport perspective, the Investigation concluded that it was "understandable that the friction coefficient was not considered as unreliable".

The Investigation noted from the CVR data that a significant number of prescribed crew callouts during both final approach and the landing roll had not been made. It was also noted that in respect of the monitoring of deceleration and reverse rpm after landing, "there are no standard procedures regarding cockpit cooperation".

It was noted that the Investigation was unable to reconcile a number of statements made by the aircraft Captain when interviewed during the Investigation with the facts recorded on the DFDR and the CVR, neither of which were found to have any fault. These included a completely different account of the application of reverse thrust after touchdown and claims of crew actions ahead of or in the absence of their actual occurrence.

Having analysed the circumstances which led to the overrun, the Investigation turned to the question of how to reduce the risk of similar events in the future. It was considered that "it is necessary to increase the knowledge and awareness of the factors that reduce safety margins during flight operations on runways in winter conditions (which) can only be achieved by ensuring that regulators and commercial operators establish improved procedures for planning and execution, and by improving initial and recurrent training of flight crews". In contrast to the generic recommendations that exist for the conduct of a stabilised approach until crossing the runway threshold, it was observed that "there are currently no recommendations for the final part of the approach, from the threshold to positive touchdown and full stop". The Investigation Authority therefore concluded "that the airline industry and regulators should examine the possibility of introducing a 'Safe Landing' concept". This was envisaged as 'taking over' from the stabilised approach concept as an aircraft crossed the landing runway threshold and it was suggested that it "could include, but not be limited to the following:"

The Investigation formally documented the Cause of the event as "the gradual decrease of the conditions for a safe landing, which was not perceived in due time".

The Final Report was published on 9 March 2017.