On 15 October 2017, a Falcon 2000EX on base leg for an easterly ILS approach at St Gallen-Altenrhein came into close proximity with a reciprocal track glider at 5000 feet QNH in Class ‘E’ airspace in day VMC with neither aircraft seeing the other until just before their minimum separation - 0.35 nm horizontally and 131 feet vertically - occurred. The Investigation attributed the conflict to the lack of relevant traffic separation requirements in Class E airspace and to the glider not having its transponder switched on and not listening out with the relevant ATC Unit.

On 15 October 2017, a Falcon 2000 (CS-DLB) being operated by NetJets on a non-scheduled international positioning flight from Munich to St Gallen-Altenrhein as NJE050N with only the three crew members on board and an Arcus glider (HB-3442) on reciprocal tracks at 5000 feet passed very close to each other in day VMC after each had very late sightings of the opposing traffic.

An Investigation was carried out by the Swiss Transportation Safety Investigation Board (STSB). The Glider was equipped with a FLARM collision avoidance system that was switched on during the entire flight and provided GPS position data. The Falcon 2000 was equipped with an FDR but data from this was not read - ATC radar data were accurate enough to establish its flight path.

The glider pilot had planned to carry out passenger flights from Amlikon and had commenced flying in the early afternoon. He did not switch on the transponder that was fitted to his glider on departure and decided that “it would only be switched on if and when required”, although he did switch on the FLARM system. He used an aerotow to reach a release at 8590 feet QNH to the south of Amlikon and then tracked northwest and then north to return to the vicinity of Amlikon (see the first illustration below). By the time he passed west abeam the small airfield at Sitterdorf, whose frequency he was listening out on in accordance with practice at his gliding club, he was flying a constant track at approximately 5540 feet QNH.

At the same time, the Falcon 2000, in receipt of ATS from the Zurich ACC sector which provided approach control service to IFR traffic using St. Gallen-Altenrhein and Friedrichshafen, had just turned onto base leg for an Instrument Landing System (ILS) approach to runway 10 at St. Gallen-Altenrhein on an opposite track to the northward tracking glider and was descending through 5770 feet for 5000 feet on QNH, the altitude of the ILS 10 FAF and associated holding pattern. Once level, the recorded ground speed was down to approximately 165 knots.

As the two aircraft approached on almost directly reciprocal tracks at practically the same altitude, the glider pilot reported having “noticed a business jet up ahead on the right-hand side of his aircraft” and had “watched it pass" at what he estimated to have been “100 metres or more”. He stated that “he was not alarmed since other aircraft frequently flew past at a similar distance in this airspace” but did admit that he found it “extraordinary, however, that the aircraft was a larger business jet and that it was flying at practically the same altitude”. He added that he had “also not known that the flying altitude of aircraft before descending on the runway 10 ILS at St. Gallen-Altenrhein was 5000 feet” and noted that “this information was not marked on the glider map”. 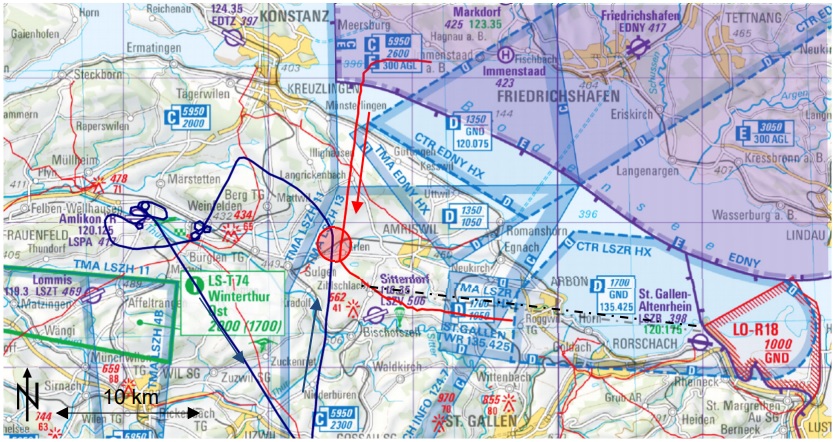 The ground tracks of the Falcon 2000 (red) and the Glider (blue) showing Controlled Airspace Classes, the St. Gallen-Altenrhein ILS LLZ (dashed black line), the conflict CPA (red circle) and the Friedrichshafen TMZ (purple shading) all depicted on the AIP Glider Map. [Reproduced from the Official Report]

At almost the same time, the Falcon 2000 pilots saw a glider in their 2 o’clock relative position “at a slightly higher altitude” and were about to turn left onto the ILS 10 LLZ. They immediately reported the sighting to ATC stating “glider very close to the right, about thirty to forty meters right hand side”. After completing their flight, the crew subsequently modified their estimate of the distance between the two aircraft to 60 metres and noted that “the glider pilot was clearly visible under the canopy” although no evasive manoeuvre would have been required even if they had not been about to make the left turn onto the ILS. The Falcon 2000 Captain stated that he was “aware that there could be VFR traffic” in the airspace involved but also that he was “astonished that the ATC were completely unaware that a glider was in the approach area for the runway 10 ILS at St Gallen-Altenrhein”.

An extract from the St. Gallen-Altenrhein ILS 10 Chart showing the CTR (red) and TMA (yellow) with the location of the conflict shown as a red triangle. [Reproduced from the Official Report]

Since the glider’s transponder was switched off, it was not visible on ATC radar monitors or on the Falcon 2000’s TCAS. The flight paths of both aircraft are shown in the illustration below. The minimum separation was estimated from available recorded data as 660 ± 100 metres laterally and 40 ± 25 metres vertically.

The relative positions of the two aircraft before at and after they passed. [Reproduced from the Official Report]

The key to the encounter was that it took place in Class ‘E’ airspace in which ATS is only required to separate IFR traffic from other IFR traffic. Information on known VFR traffic may be offered but in this case, the VFR pilot chose not to switch on his transponder and not to listen out on the frequency which was likely to be working IFR traffic, both choices which he was entitled to make. It was noted that in the Class ‘E’ airspace involved, it was only mandatory to carry and switch on a functioning transponder when flying in excess of 7000 feet amsl - and for gliders, even this requirement only applies “if sufficient electrical supply is guaranteed”. It was noted that around Friedrichshafen Airport north of Lake Constance, there is a TMZ but that there is no similar designation for the adjacent Swiss airspace around St. Gallen-Altenrhein.

The Investigation noted that this airspace issue - IFR flights being controlled on arrival and departure routes which pass though Class ‘E’ airspace that is not also designated as a TMZ amounted to a “Safety Deficit” which had been identified in previous investigations and is a problem which is “not restricted solely to individual airports or specific types of aircraft, but exists in the entire airspace over Swiss territory and affects all aircraft”. It also noted that safety recommendations to address this had been made as a result of investigations into loss of safe separation events in 2012 and 2015 but that at the time of publication of this latest investigation report “none of these recommendations had been implemented, nor was there a specific implementation plan”. However, since implementation of these recommendations would also address the Safety Deficit identified in this investigation, the STSB did not issue a new safety recommendation.

The Cause of the investigated Serious Incident was “the fact that the two flight crews did not visually identify each other’s aircraft in a timely manner”.

Safety Action taken as a result of the event by the Cumulus Gliding Club, owner/operator of the glider involved, involved inviting a member of staff from air traffic control to present on the issues surrounding operations at St. Gallen Altenrhein airport and their consequences for operations out of Amlikon airfield. Amongst the actions which it was then agreed could be taken by glider pilots to reduce the risk of a collision in this shared airspace were:

A ‘Safety Advice’ was issued targeted at “the Aero Club of Switzerland (AeCS) and all airspace users” as follows:

The Aero Club of Switzerland should raise awareness amongst its members of the fact that increased IFR traffic is to be expected in Class E airspace which borders on Control Zones (CTR) and Terminal Control Areas (TMA) of regional airports such as St. Gallen-Altenrhein. Keeping the transponder switched on continuously and making contact with the aerodrome controller of the respective aerodrome to communicate their own position and flight altitude are the only possible ways, besides ‘see and avoid’, to make a VFR aircraft detectable by IFR traffic.

The Final Report of the Investigation was completed on 20 August 2019 and subsequently published on 5 September 2019. No Safety Recommendations were made. The Investigation assigned the event to ICAO AIRPROX Category ‘B’.