On 2 August 2007, a Fokker F50 on an ILS approach to Maastricht in IMC came into close proximity inside the CTZ with an unseen light aircraft which had failed to comply with its Special VFR transit clearance. The Investigation found that the transiting aircraft had come within 0.14nm / 260 metres of the opposite direction F50 at a similar altitude without either aircraft having sight of the other, and that the Harvard had been wrongly assumed by ATC to be a helicopter after an initial lack of call sign prefix clarity on first contact had not been positively resolved.

On 2 August 2007, a Fokker F50 (PH-KVC) being operated by KLM Cityhopper on a scheduled domestic passenger flight from Amsterdam to Maastricht and making a daylight ILS approach in IMC came into close proximity with a privately operated North American T6J Harvard (D-FUUK) on VFR flight from Aachen Merzbrück, Germany to Duxford, UK without either aircraft seeing the other. The Harvard was transiting the zone en route under a Special VFR clearance.

An Investigation was carried out by the Dutch Safety Board using recorded ATC data as the primary source of information related to the conflict.

It was established that the Harvard had been on a VFR flight plan and had just taken off from a nearby non-Dutch aerodrome. The initial R/T request to Maastricht APP for transit through the CTZ had been difficult to make out despite a requested repetition and the aircraft call sign prefix had wrongly been assumed to be 'H' instead of 'D'. This assumption made it impossible to find the flight plan in the appropriate database and so in accordance with normal practice in such a situation, a flight plan was created using the incorrect registration and, although the word 'Harvard' had been included by the pilot in the initial contact call, the controller involved was unfamiliar with the type and "because background noise and transmitting quality had similarities with that often experienced with helicopters, the air traffic controller filed the flight as a helicopter flight". This meant that less restrictive weather minima applied to the issue of a Special VFR (SVFR) clearance and, with the conditions for conducting a SVFR flight even by a helicopter being "marginal", a crossing clearance via the overhead at 1,200 feet was then issued. With "clouds below 600 feet", it was considered that it would not have been possible to fly "clear of cloud and in continuous sight of the ground" or even with the helicopter requirement for a minimum in flight visibility of 3,000 metres.

The Harvard was transferred to the TWR frequency and instructed to call when one minute from crossing overhead. When that call was received the TWR controller instructed the aircraft to "remain well east of the field and clear of the final runway 21 because of a Fokker 50 on final approach". At this late stage, the APP controller who had been monitoring the transit advised the TWR controller that he anticipated that the Harvard would cross the final approach and in response the TWR reiterated the need for an immediate right turn and the Harvard pilot advised having already begun it and would continue it.

As the F50 passed 1,350 feet, its crew received a TCAS TA and then heard the TWR controller's exchange with other traffic. As the F50 passed approximately 1,060 feet, TWR advised that "a helicopter" was in their vicinity at 1,000 feet and "not cooperating". At about this point, the Investigation found that the conditions for a TCAS RA had been met but that it had been "suppressed because the F50 was below 1,000 feet". No ATC avoiding action was given and the F50 ILS approach was continued to a landing. 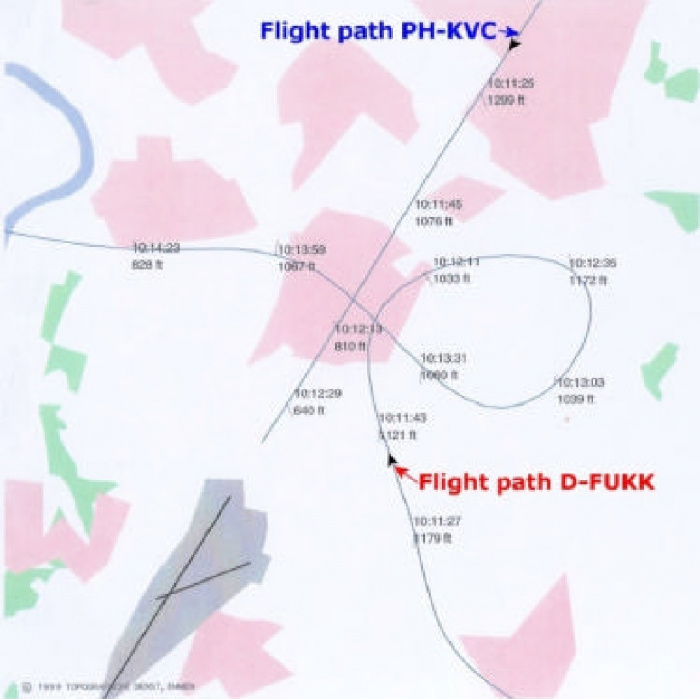 The flight paths of the two conflicting aircraft. [Reproduced from the Official Report]

The Investigation noted that the conflict had occurred after ATC had failed to detect the correct radio call sign of the Harvard and then made the assumption that it was a helicopter. This led to the decision to issue a Special VFR clearance to transit the Maastricht CTZ in conditions which meant that the applicable regulations "were not correctly applied and the performance of the aircraft was not properly estimated". The weather conditions which actually prevailed meant that the pilot of the Harvard "did not have sufficient visual references for his position in relation to the airfield and the other aircraft".

The Final Report was published on 26 November 2009. No Safety Recommendations were made.