On 9 August 2012, a serviceable Cobham Leasing Fan Jet Falcon overran the 2291 metre long runway at Durham Tees Valley after beginning rejecting take off from above V1 because of a suspected bird strike. The crew believed there was a possibility of airframe damage from a single medium sized bird sighted ahead which might have been hit by the main landing gear. It was found that the overrun distance had been increased by low friction on the stopway and noted that the regulatory exemption issued for operation without FDR and CVR was no longer appropriate.

On 9 August 2012, a Fan Jet Falcon 20 being operated by Cobham Leasing Airlines departing Durham Tees Valley on an aerial work detail in normal daylight visibility overran runway 23 after initiating a high speed rejected take off after sighting a single bird ahead. The three occupants were uninjured but damage to the aircraft including ingestion of mud and stones into both engines rendered it unfit for further flight until repaired.

An Investigation was carried out by the UK AAIB. The aircraft type is required to have an Flight Data Recorder (FDR) and Cockpit Voice Recorder (CVR) but it was found during the Investigation that the accident aircraft was one of a fleet of aircraft of this type operated by Cobham which had been exempted from this requirement by the UK CAA and neither was fitted. Although this “severely limited the ability of the Investigation to determine the exact sequence of events”, a careful analysis of radar data with cross reference to aircraft performance information enabled the Investigation to reconstruct the aircraft trajectory with a reasonable degree of confidence. 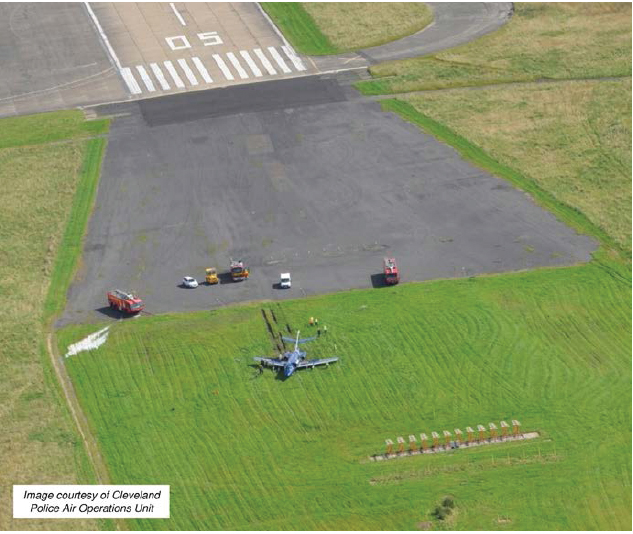 It was noted that the prevailing weather conditions had been benign and established that the take off from runway 23 had used the full length of the runway with a calculated V1 of 141 knots. A “large bird” had been seen by the PF flying towards the aircraft before passing down the side of the aircraft “sufficiently close that the commander considered a birdstrike inevitable”. ATC were advised of the rejection and, when it became apparent that maximum braking was not going to prevent an overrun, the aircraft was intentionally steered to the right to avoid impacting the Instrument Landing System (ILS) and lighting arrays. After crossing the 119 metre stopway and the remaining 60 metres of the runway strip onto the grass Runway End Safety Area, the aircraft landing gear sank up to the axles into the soft ground and came to a stop 233 metres beyond the end of the runway paved surface.

The largely intact remains of a single carrion crow weighing approximately 450 gram were recovered from the runway and it was considered that it may have hit the main landing gear.

No evidence was found that indicated any relevant aircraft unserviceability had prevailed at the time of the accident take off and it was established that “assuming the correct crew actions and timing (following the decision to reject the take off) performance modelling indicates that the decision to reject the takeoff was made at a speed such that the equivalent V1 was 150.2 KIAS”, some 9 knots above the V1 actually applicable to the take off. Crew recollections on this point conflicted, with the First Officer stating that he had called V1 at the correct indicated speed and the Captain, acting as PF that he had rejected the take off prior to any V1 call and would not have decided to do so after hearing that call. It was estimated that had the decision to reject the take off been made using the correct V1, then “the aircraft would have stopped about 100 metres before the end of the runway". The rate of deceleration on the stopway and subsequent runway strip was reviewed and it was found that it had been only about half as much as on the runway surface due to the different surface material and contamination of the surface by loose debris. Had it had the same friction as the runway, it was estimated that the aircraft would have entered the grass RESA at 6 knots rather than the 50 knots which it was estimated had occurred. 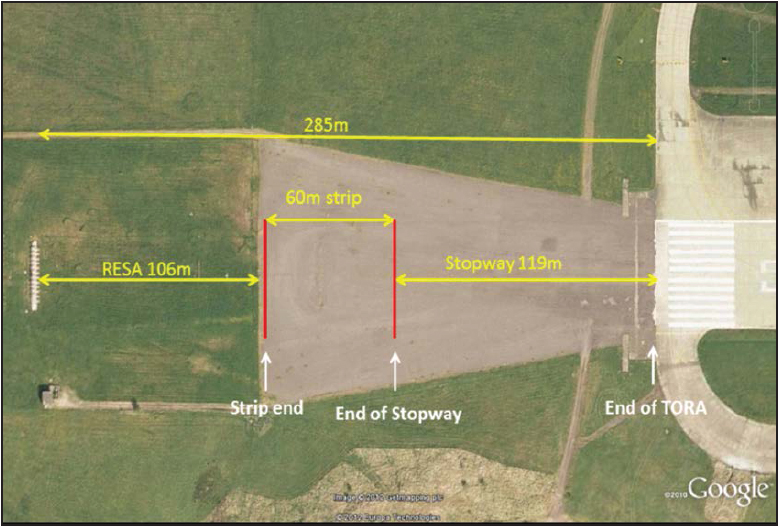 The Investigation concluded that whilst runway 23 friction characteristics “would have remained above the minimum required levels” following the measurements recorded at the most recent periodic check, “limitations in existing continuous friction measuring equipment makes the measurement of friction characteristics at runway ends and stopways impractical”. The effect of this was that friction figures for these areas were not available to the Investigation. It was noted that “the CAA, with others, is currently undertaking research into friction measurement capability in order to address this problem”.

The reason for the CAA exemption from the requirement for the aircraft to be fitted with a CVR and an FDR was examined. It was noted that it had been applied for and approved because of “perceived difficulties and cost in retrofitting the recorder systems required when weighed up against the expected remaining life of this particular fleet” and had been granted on an annual basis from 2009 onwards. However, the Investigation noted that “a significant part of the cost of retrofitting an FDR system is associated with providing additional wiring and interfacing to the existing aircraft systems to capture the required parameters” and found that that since exemptions had begun, the aircraft covered by it had been retrofitted with a modern avionics suite which “would significantly reduce the cost of interfacing to the majority of the required parameters should an FDR system be retrofitted.” It was further noted that “discussions with the appropriate maintenance organisation did not identify any significant obstacles to retrofitting a modern CVR”.

Safety Action as a result of the overrun by the aircraft operator to variously improve and correct Operations Manual content in respect of rejected take offs and by the CAA to review its policy and requirements on Stopways was noted.