On 5 August 2001, a Dassault Falcon 20 with an inoperative GPWS making a night approach to Narsarsuaq by visual reference impacted terrain 4.5 nm from the aerodrome. The Investigation noted the original crew intention to fly a non-precision instrument approach and attributed the accident to the failure of the crew to follow applicable procedures or engage in meaningful CRM as well as to deficiencies in the Operator's required procedures which had combined to leave the crew vulnerable to a 'black hole' effect. The effects of fatigue were considered likely to have been contributory.

On 5 August 2001, a Dassault Falcon 20 (D-CBNA) being operated by Naske Air on a non-scheduled cargo flight from Keflavik, Iceland to Narsarsuaq, Greenland failed to complete an approach at destination in night VMC and was subsequently found to have impacted mountainous terrain 4.5nm from the airport. The two pilots and one company employee passenger were killed and the aircraft was destroyed by the impact and a post-crash fire.

An Investigation was carried out by the Danish AIB. The accident aircraft was equipped with both an FDR and a CVR and both were recovered with no significant damage. On examination, the FDR was found to be malfunctioning and only poor quality audio data were obtained from the CVR due to a lot of background noise on the area microphone channel which meant only a partial transcript of flight crew communication could be made. However, the NVM from the GPS installed in the aircraft was recovered and provided useful flight data.

The 56 year-old aircraft commander and his 40 year-old First Officer both held German licences on which the only multi-engine type rating was the Falcon 20 but it was not possible to establish the extent of the flying experience of either pilot. The Captain was the owner of the aircraft operator and under its German AOC was the Accountable Manager and the Flight Operations Post Holder. The First Officer was the nominated Post Holder for Maintenance, Flight Crew Training and Ground Operations. The sole passenger was employed by the Operator as a Falcon 20 First Officer. It was noted that the accident flight was between two airports designated as technical stops on a contracted cargo flight from Gdansk, Poland to Louisville USA.

It was established that the approach had been briefed as an NDB/DME to runway 07 at Narsarsuaq (see the chart below) and that the Captain had taken over as PF prior to its commencement due to his greater familiarity with the aerodrome. The Aerodrome FISO had advised broken cloud at 6000 feet as the lowest observed, good visibility and a surface wind favouring runway 07 and had approved an approach to that runway at own discretion.

On the evidence available, the Investigation concluded that the NDB/DME approach procedure had been initiated prior to the aircraft descending clear of cloud on the outbound leg of the procedure at a high speed contrary to the Operator’s SOP for a two-engine VOR or NDB approach. It was further concluded that during the inbound turn the crew obtained visual reference with the aerodrome and to save time decided to continue visually, then set a direct course to short final - it was considered possible that the Captain's familiarity with the area may have led to overconfidence. Further descent would then have been reliant on "the angular subtends of the runway and the aerodrome lights" with the pilots so preoccupied with maintaining visual reference that they did not adequately monitor the aircraft flight instruments. It was a dark night and the likely lack of visual vertical position awareness was considered as a manifestation of the “black hole” phenomenon - bright aerodrome lights in an otherwise dark area in good visibility. The First Officer reported that the aircraft was on final to runway 07 when it was in fact on a "wide left base". The FISO passed the spot wind and confirmed that the runway was clear but stated subsequently that although he had visually scanned the approach sector, he had not, as he normally would in the prevailing conditions, seen the aircraft. 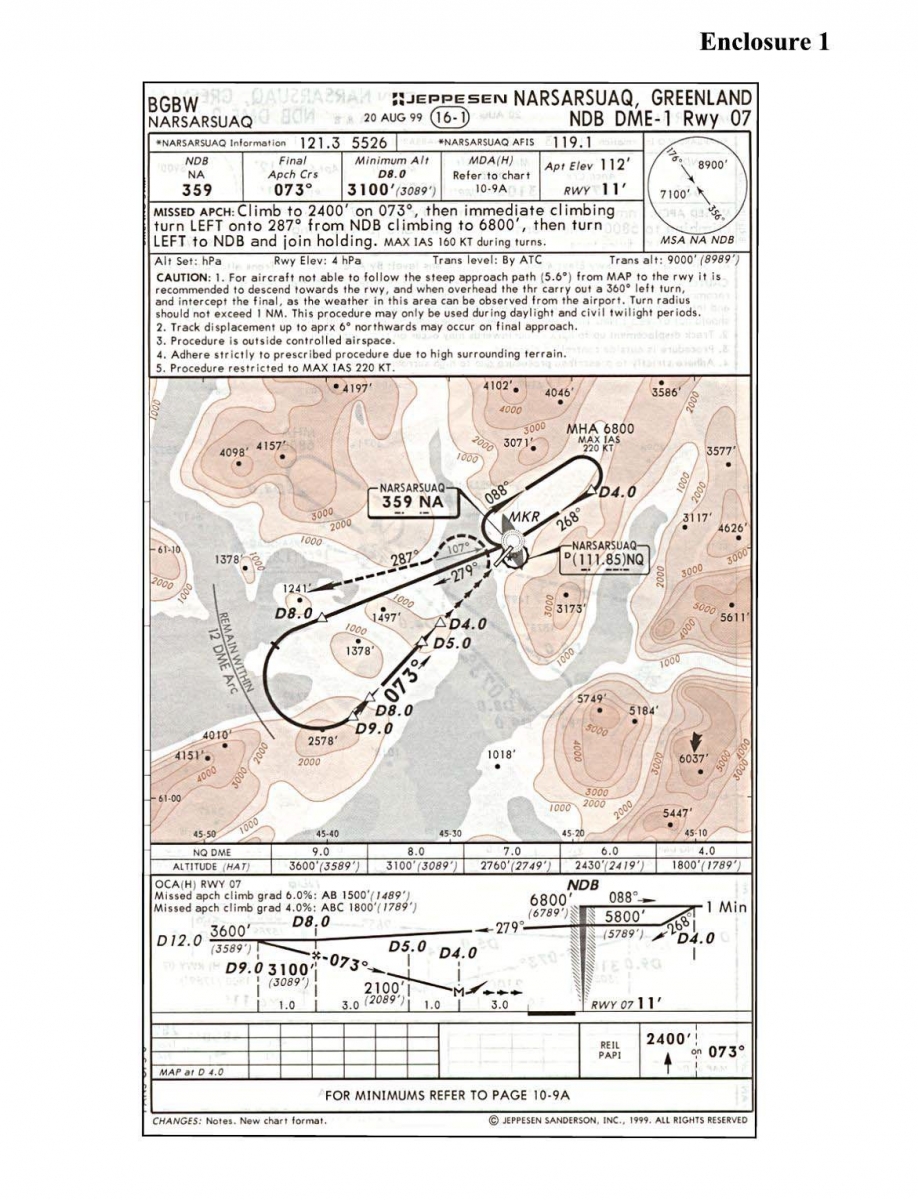 Some 38 seconds later, the aircraft impacted mountainous terrain at an elevation of about 700 feet in a wings-level attitude approximately 4.5nm from the runway and a post-crash fire began. It was considered that the observed wreckage pattern "was consistent with a controlled shallow descent". The power levers were found in a position near flight idle and the CVR data showed that prior to impact there had been no flight crew call outs relevant to range/distance or terrain proximity and no GPWS alerts/warnings. The track flown to impact is shown on the map below. 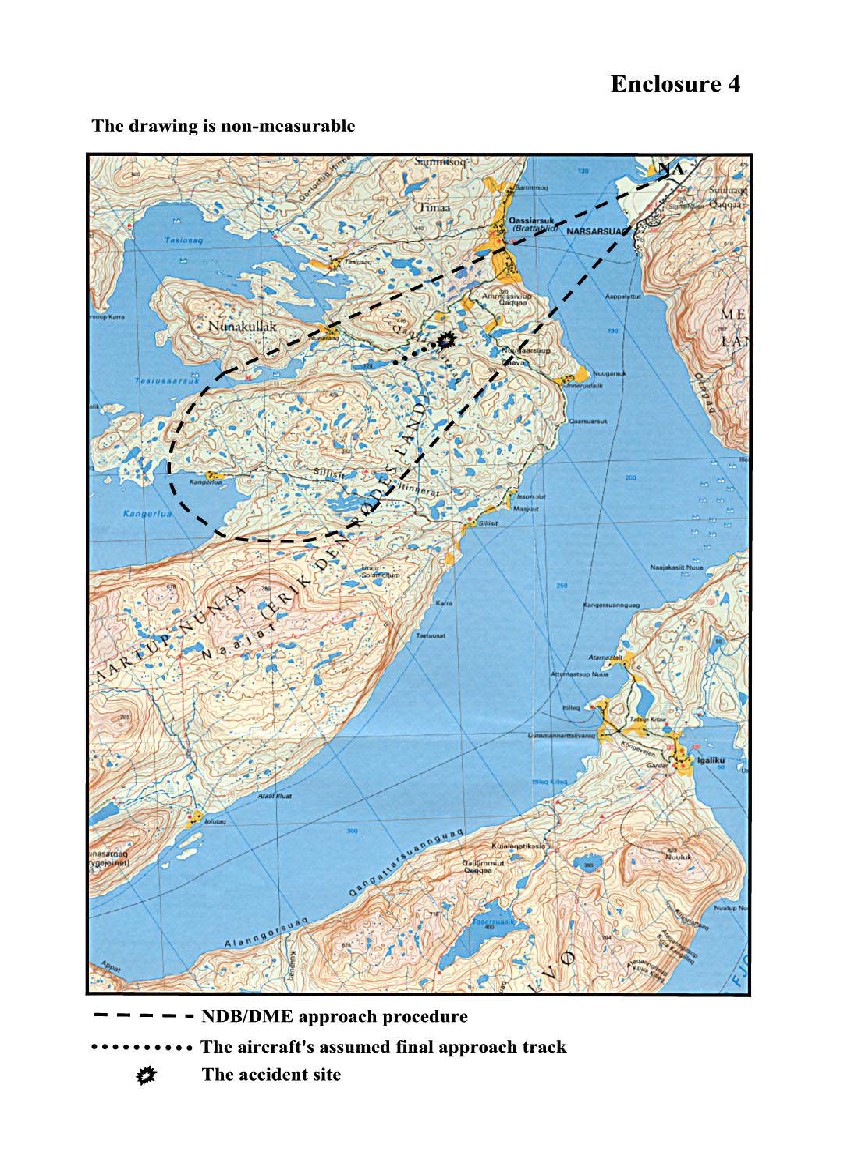 The 'NA' NDB, the NDB/DME procedure track and the estimated final visual approach track flown to the accident site [reproduced from the Official Report]

The Investigation found that throughout the approach, the flight crew had not complied with the Operator’s Standard Operating Procedures (SOPs) and that there was no sign that CRM techniques had been applied. The absence of any SOPs in respect of the performance of a stabilised approach was also considered relevant as was the fact that by the time the accident occurred, not only had both pilots exceeded their maximum allowable FDP of 14 hours by almost 3 hours, but the circadian low had been reached, a combination strongly favouring fatigue. Although part of the elapsed FDP was attributable to a late departure from Gdansk, the Investigation concluded that departing Keflavik on the accident flight sector was in gross contravention of the applicable German Flight Time Limitations. An underestimation by the flight crew of their fatigue may well have contributed to their "improper decision making, lack of situational awareness and thereby to their failure to properly execute the approach". The Captain may also have been affected by stress, since the contracted task was to deliver the cargo to Louisville by 0900 hrs; the handling agent in Keflavik told the Investigation that the Captain "had seemed stressed".

The absence of automatic callouts at 500 feet agl and 200 feet agl as well as any terrain proximity Alerts/Warnings prior to impact led the Investigation to conclude that "the GPWS was inoperative". It was observed that whilst the Master MEL for the aircraft type allowed dispatch with the GPWS inoperative, it was clearly "hazardous to operate in mountainous terrain" without this system functioning.

A number of other findings in the area of non-compliance, in particular that the AOC held by the Operator limited flight operations to the EUR/MED regions yet the accident flight occurred in the NAT region and the final destination was in the NAM region, were considered not directly relevant to the accident.

The Investigation concluded that the Cause of the Accident was "a combination of non-adherence to the approach procedure and the lack of vertical position awareness".

In summary, it was found that "several of the most common factors found in CFIT accidents were present in this accident". These were summarised as:

The Final Report made no Safety Recommendations.