On 24 November 2016, a Dassault Falcon 7X being marshalled into an unmarked parking position after arriving at London City Airport was inadvertently directed into a collision with another crewed but stationary aircraft which sustained significant damage. The Investigation found that the apron involved had been congested and that the aircraft was being marshalled in accordance with airport procedures with wing walker assistance but a sharp corrective turn which created a 'wing growth' effect created a collision risk that was signalled at the last minute and incorrectly so by the wing walker involved and was also not seen by the marshaller.

On 24 November 2016, a Dassault Falcon 7X (VQ-BSO) being operated privately on a passenger flight from Rotterdam to London City was taxiing in to its assigned destination parking position after landing when, whilst following marshalling instructions, its right winglet collided with the nose of another aircraft parked on the adjacent stand in normal day visibility. There were no injuries to the 4 occupants of the aircraft or to any other persons but significant damage was caused to the radome and radar antenna of the stationary aircraft. The taxiing aircraft winglet sustained only minor abrasions. 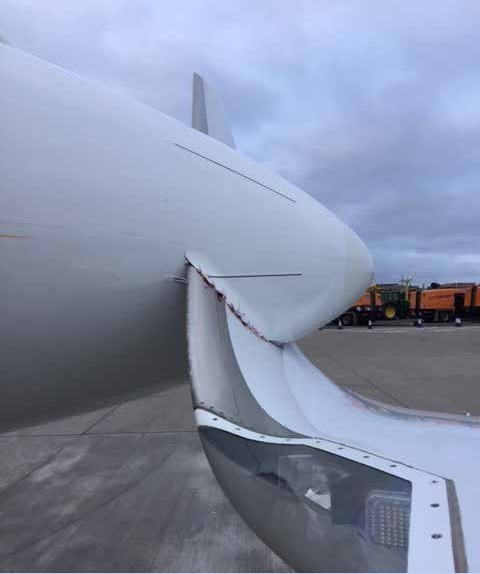 The damage caused by the collision. [Reproduced from the Official Report]

An Investigation was carried out by the UK AAIB. Airport CCTV recordings were available and clearly showed the taxi track of the aircraft as it moved towards and into the GA Apron. It was found that the 43 year-old Captain had 7,900 total flying hours which included 2,687 hours on type. He had been acting as PM and for that reason had been occupying the right hand pilot seat in accordance with operator requirements that the PF must always occupy the left hand seat, all pilots on the fleet being qualified to occupy either seat.

The taxi route after landing was to the west end of the ramp beyond stand 15 which is designated as the GA Apron (see the illustration below). The plan was for the aircraft to be marshalled to a nose-in position facing the Jet Centre building. Other aircraft were parked either side of this position and two ‘wing walkers’ were in position to assist the marshaller. The approximate positions of the other two aircraft relative to the allocated parking position are shown on the second illustration below. The aircraft identified on this second illustration as VQ-BSF was parked on the western end of the GA Apron "further forward than normal" and was soon due to depart so its crew were in their seats. Another Falcon 7X was parked on Stand 15, facing approximately north. 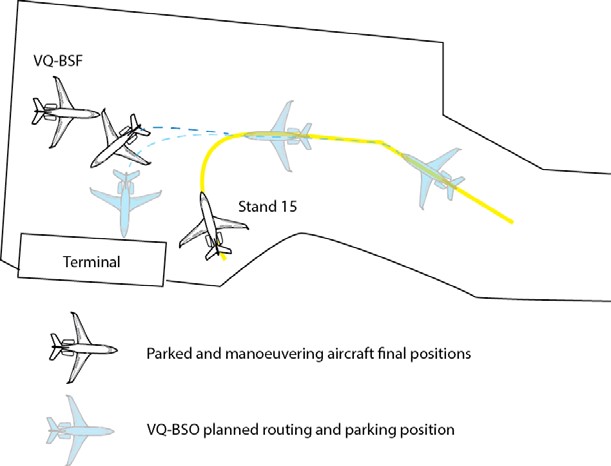 The relative positions of the parked and manoeuvring aircraft. [Reproduced from the Official Report]

It was established that the aircraft had initially been marshalled ahead until it was clear of the other Falcon 7X on 15 to its left, somewhat beyond what the PF, who had previous experience of parking on this apron reported afterwards, had thought would have been the normal turning point. The marshaller then indicated a left turn towards the terminal building and as this was commenced, the Captain in the right hand seat monitored the right wing tip. The marshaller then indicated that a tighter left turn was needed and as the turn tightened, the right wing tip speeded up and the wing walker monitoring the right wing tip belatedly realised that there would not be enough clearance, and in an attempt to alert the marshaller crossed his arms in front of his chest instead of above his head - the latter being the correct way to signal 'STOP'. The Marshaller was looking to his right at the time and did not see this. Almost immediately the aircraft's right winglet embedded itself in the nose of VQ-BSF. The crew felt the impact and immediately stopped the aircraft.

The Investigation found that all the ground handling staff involved had been trained as required and were current. It was noted that the apron where the collision occurred was "relatively small" and had no ground markings for parking or taxiing except the entry line and stand 15 with the aircraft accepted covering a wide range of sizes. Both the AIP and the Operator’s Jeppesen charts carried on the aircraft contained instructions to pilots to follow the marshaller’s instructions. It was noted that under the applicable requirements for clearance distances on marked parking stands, the 26.21 metre wingspan Falcon 7X aircraft would be classified as a Code 'C' aircraft which would need a minimum clearance distance of 4.5 metres.

Reference was made to the 'Ramp Instructions' document for the Jet Centre Ramp which was found to cover staff requirements, procedures and signals to be used when marshalling aircraft. Guidance in this document included the following:

The "wing growth" effect covered in the Airport Operations document and quoted above was identified as key to the collision given the absence of the safe clearance margin which would have been required for a marked stand. It was noted that the sharp left turn given by the marshaller would have pivoted the aircraft around the stationary left wheel, so that the radius of turn would have been "from the left main wheel to the right wing tip, the arc of which subtends a greater distance out from the centre of the fuselage" - see the illustration below. 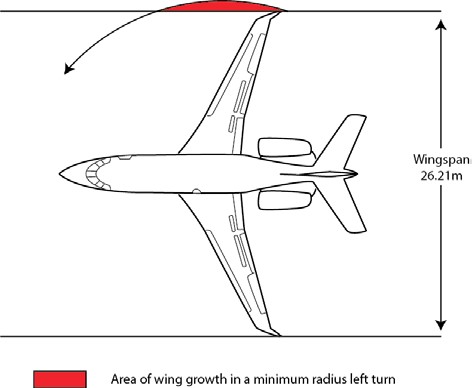 The wing growth effect on a Falcon 7X making a sharp left turn.[Reproduced from the Official Report]

The formally-stated Cause of the collision was that it "occurred due to the late left turn directed by the marshaller and him not seeing the STOP signal from the right wing walker, due to his attention being focussed on the left wing walker". One Contributory Factor was also identified - "the effect of ‘wing growth’". . Safety Action identified in the form of recommendations from the internal investigations by both the aircraft operator and the airport operator were noted to be as follows:

The Final Report of the Investigation was published on 12 October 2017. No Safety Recommendations were made.