On 15 May 2017, a Bombardier Global Express crew failed to land on the restricted runway width available at Montréal St Hubert where there was a long-term construction project which had required reductions in both width and length of the main runway. The Investigation found that relevant NOTAM information including a requirement to pre-notify intended arrival had been ignored and that during arrival the crew had failed to respond to a range of cues that their landing would not be on the normally-available runway. Deficiencies in the arrangements made for continued use of part of the runway were also identified.

On 15 May 2017, a Bombardier Global Express, (N888ZJ) being operated by Zetta Jet USA on a non-scheduled international passenger flight from Teterboro, New Jersey to Montréal St. Hubert made a daylight VMC landing at destination on a partly closed area of runway 06L on which construction work was in progress. The aircraft was manoeuvred onto the available part of the runway and stopped 23 metres before its end. There were no injuries but runway lighting was damaged and the aircraft sustained substantial impact damage.

The Investigation established that on the day of the excursion, a pre-planned period of movement area construction work was in progress with Phase 2 (three months from 15 April 2017) current. This activity, communicated by a NOTAM which the flight crew had in their possession, stated that at the time of arrival, the northern half of the 46 metre wide runway 06L/24R would be closed for the full length and that the length of the southern half would be reduced from 2377 metres to 1524 metres and that this available distance would commence at the beginning of the 06L end of the runway and not at the usual displaced threshold position 336 metres beyond its start. 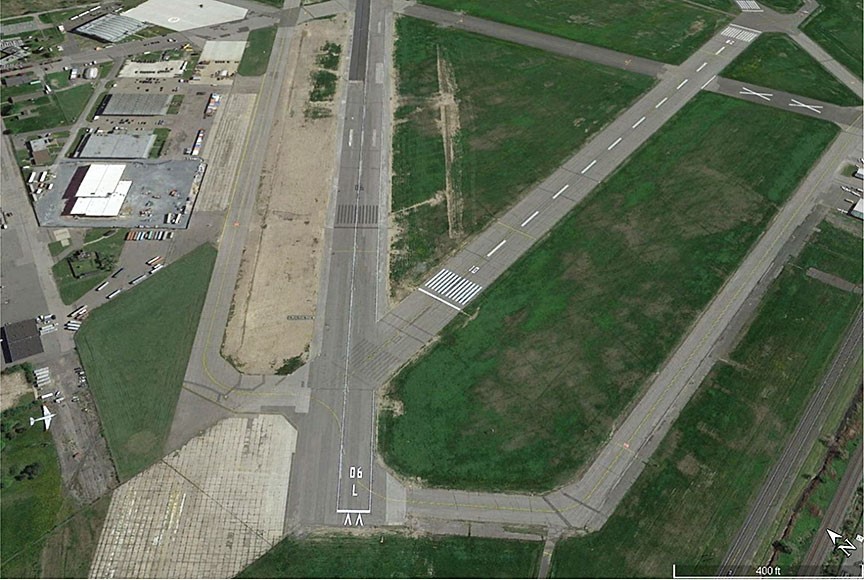 The touchdown area of the temporary runway 06L. [Reproduced from the Official Report]

It was also NOTAM’d that the available width of runway 06L/24R would only be available to aircraft with a wingspan exceeding 24 metres with 48 hours prior notice to the airport operator. Such a request resulted in the issue to the operator of “a detailed description of the works, including photos and a diagram of the airport with red Xs showing the closed side of the runway and a green line showing the south side of the runway that was usable”. It was noted that this diagram did not provide any information on the dimensions of the usable runway and that it included the number ‘7801’ alongside the eastern end of the green line which was the normal length (in feet) of the runway. It was further noted that “by reading and signing the information provided, an operator agreed to use the airport under the conditions listed”. The wingspan of the aircraft involved was 28.5 metres.

It was noted that because the airport operator had issued information on the work in progress by NOTAM, closed or otherwise unusable parts of the normal runway were not marked. It was also noted that contrary to the applicable recommended practices document issued by Transport Canada, the reduced width runway did not have centreline markings. It was also considered by the Investigation that limited markings present on both the closed and in use sections of the runway and the continued presence of the normal TDZ and runway centreline markings and the presence of white Xs at the end of the reduced length of the runway but not on the closed north side of it had been less than ideal.

Prior to descent, the Captain conducted an approach briefing which included his intention to conduct an RNAV(GNSS) precision approach to runway 06L using LPV and the 400 feet DA was noted. Soon after this, the PM copied the latest ATIS which included the availability of an RNAV approach to runway 06L, the fact that TORA, TODA, ASD and LDA were all 5000 feet (1524 metres). The ATIS also included the fact that 75 feet (23 metres) of the south side of Runway 06L/24R was open from the runway 06L threshold and that 75 feet (23 metres) of the north side of the runway was closed along its entire length.

CVR data showed that after listening to the ATIS, the PM communicated some of the information to the PF but not the length and width of the available runway. Once on final approach in VMC, the aircraft was configured for landing with flaps at 30°. The AP remained engaged and, as the aircraft approached the RNAV approach procedure IAF, the crew reported their position. The TWR Controller responded by asking if the crew had read the NOTAMs detailing the construction work on Runway 06L and the PM replied that they had.

At approximately 500 feet agl, the AP was disengaged and the approach was continued manually and with the aircraft aligned with what would have been the full width runway centreline - the PF reported having “perceived the temporary edge marking on the left side of the runway as the centreline”.

A clearance to “land on the south side of Runway 06L” given by the TWR Controller was read back by the PM without including “on the south side” and neither of the pilots questioned the qualification to the clearance, nor was the incomplete read back challenged by the controller. It was noted that although Canadian Aviation Regulations “do not specifically require pilots to read back landing clearances” they do require a pilot-in-command of an IFR flight to “read back […] the text of any […] clearance received”.

Touchdown occurred 260 metres past the runway threshold with the nose wheel 11 metres left of the temporary runway centreline - 0.45 metres to the right of the temporary left hand edge of the runway - so that the left main landing gear was about 1.6 metres to one side of the runway. Once on the ground, the crew reported having realised that the aircraft had struck something and the aircraft ground track was adjusted to the right prior to it stopping 90 metres from the end of the available runway and slightly right of the temporary runway centreline.

There were no injuries and the sole passenger disembarked from the aircraft a few minutes later and was escorted to the terminal. Damage to the aircraft was substantial and involved the landing gear, left wing and engine nacelle and the lower fuselage. Tyre debris which was ingested by the left engine caused only superficial damage – punctures to the acoustic panel surrounding the engine inlet. Five temporary runway edge lights were also damaged beyond repair by aircraft impact. It was noted that although these lights were required to be fixed lights mounted on frangible fittings, the lights being used were free standing and their presence had not been included in any NOTAM.

It was noted that from the time the current construction project had begun up to the time of the investigated event, there had been six occurrences related to the partial closure of runway 06L/24R four of them involving aircraft collision with the temporary runway lights. Further events were noted to have occurred in the course of the three months following the investigated event which had included two aircraft on the closed side of the runway and two aircraft that had landed on the parallel taxiway after being cleared to land on the south side of the runway. However, none of these events had involved injury or any significant damage to the aircraft involved.

It was additionally noted that during a similar period of reduced width runway operations at Iqaluit in 2015, there had been two occurrences involving runway edge lights being struck despite the closed side of the runway being clearly marked with crosses and the centreline of the reduced-width runway being clearly marked (see the illustration below). 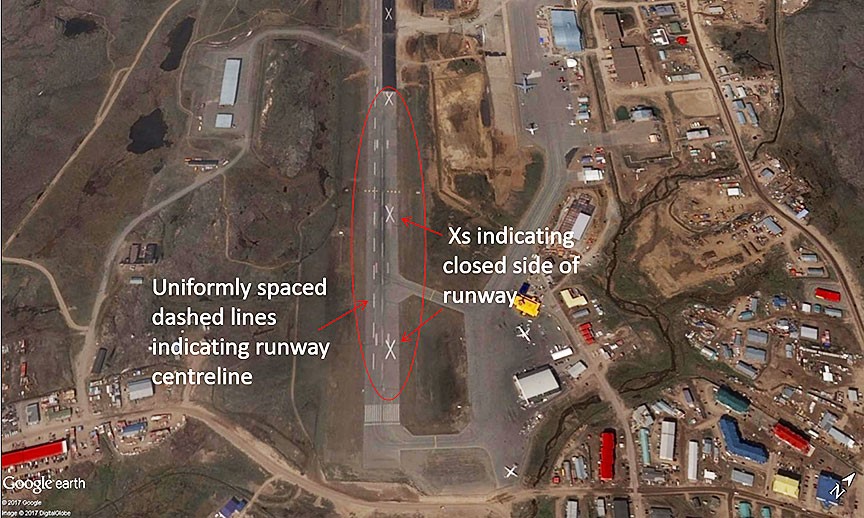 The clearly marked reduced-width runway at Iqaluit in 2015. [Reproduced from the Official Report]

It was apparent that the flight crew’s pre fight planning had been wholly inadequate and the evidence available indicated that during the arrival to their destination, information provided to the crew about the abnormal runway status “did not seem to have been compelling to or have been absorbed by them”, rather they had “adopted a mental model that was resistant to change and to the apprehension of elements that were critical to a safe landing”. It was concluded that “despite the NOTAMs, ATIS information and communication with the controller, the flight crew had incorrectly believed that the entire width of the runway was available” right up until touchdown.

The Findings as to Causes and Contributory Factors of the event were formally documented as follows:

The Findings as to Risk in relation to the event were formally documented as follows:

Other Findings from the Investigation were formally documented as follows:

The Final Report of the Investigation was authorised for release on 20 June 2018 and it was officially released on 3 July 2018. No Safety Recommendations were made.