On 21 September 2012, two aircraft came into conflict in Class 'A' airspace whilst under radar control at night and loss of separation was resolved by TCAS RA responses by both aircraft. Investigation found that one of the aircraft had passed a procedurally-documented clearance limit without ATC clearance or intervention and that situational awareness of its crew had been diminished by communications with the conflicting aircraft being conducted in Spanish rather than English. A Safety Recommendation on resolving the persistent problem of such language issues was made, noting that a similar recommendation had been made 11 years earlier.

On 21 September 2012, a Bombardier Global Express (EC-JIL) being operated for private business purposes by Punto-FA on a passenger flight under callsign MGO 758 from Nice to Ibiza and a Dassault Falcon 2000 (CS-DNP) being operated by NetJets Europe on a passenger charter flight from Porto to Ibiza under callsign 559U came into conflict in Class 'A' airspace near Ibiza Airport in night Visual Meteorological Conditions (VMC) as both aircraft were positioning to final approach.

It was dark at the time of the conflict and the prevailing weather conditions recorded at Ibiza Airport shortly before it occurred included visibility >10km and the only cloud SCT/4500 feet aal.

It was established that the Global Express aircraft had been in radio and radar contact with the Palma ACC which provides Ibiza APP service and was being vectored towards the runway 06 LOC at Ibiza on a heading of 240° in descent to FL 080 to the southeast of Ibiza. The Falcon aircraft was approaching Ibiza from the north west on a direct track to TILNO IAF for the same Instrument Landing System (ILS) approach at Ibiza. It was initially under the control of the Levante TACC and was then transferred to Ibiza APP and cleared to continue descent to FL 090 and subsequently re-cleared to 2500 feet Altimeter Pressure Settings.

Ibiza APP then re-cleared the Global Express to descend to 2500 feet QNH and, just over a minute later, instructed the Falcon to reduce speed to 250KIAS and re-cleared it to descend to 3000 feet QNH. Just over one minute after this, the Falcon reached TILNO, which is not on the ILS LOC track but to the north of it, and turned left towards the LOC and the crew requested clearance to descend on the ILS. In response, APP instructed the aircraft to turn right onto radar heading 160° and cross the LOC. After "several requests to confirm the instruction to cross the LOC", APP instructed the aircraft to "turn immediately onto heading 180°" and the crew started this turn when their aircraft was just reaching the LOC. They requested the intentions of APP but "the controller did not reply".

Almost immediately, APP instructed the Global Express, which had previously been instructed to turn right onto radar heading 270°, to turn further right onto heading 030° to intercept the 06 LOC and cleared it for the ILS approach. This instruction was given using English to communicate with this aircraft for the first time. It was not acknowledged.

APP then repeated the instruction to the Falcon to turn immediately onto heading 180°, after which the aircraft reported a TCAS RA. Two seconds, later, Ibiza TWR called APP to report that the two aircraft were both at around 3,000 ft. Shortly afterwards, the Global Express called APP to advise that it had also received a TCAS RA and that it was turning to heading 020° to intercept and complete the ILS approach to runway 06.

The diagram below shows the tracks flown by the two aircraft during the encounter. 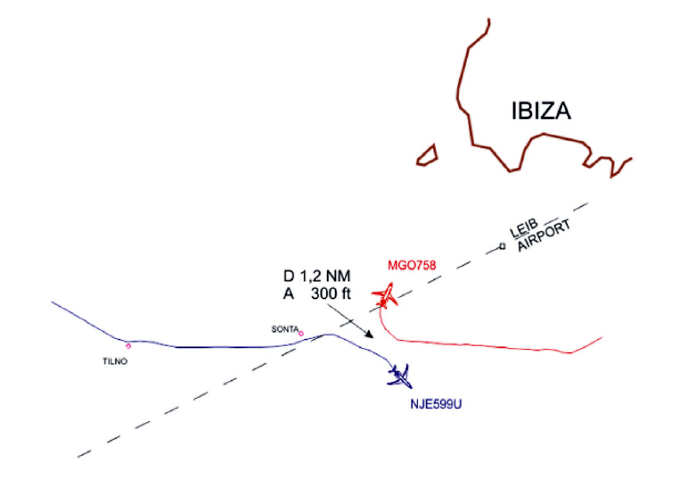 It was subsequently established that:

It appeared that the Falcon RA annunciation may have preceded that received by the Global Express.

A number of pertinent facts were established, including the following:

The formally-recorded Conclusions of the Investigation included the following:

The Investigation determined that the Cause of the conflict was aircraft CS-DNP crossing the IAF TILNO without the relevant clearance due to not having a clear picture of the approach sequence.

It was additionally determined that Contributory Factors were:

It was noted that this Recommendation was essentially a repeat of a similar one made in 2003 "regarding the exclusive use of English in communications".

The Final Report was approved on 27 February 2014 and subsequently made available in English translation.