A Gulfstream 4 departing from Berlin at night with good surface visibility prevailing was cleared to taxi onto the parallel runway beyond the one in use for landing because both the GND and TWR controllers had incorrectly assumed the original parking position of the aircraft. Upon approaching the runway crossing, the Gulfstream 4 crew recognised a stream of approaching aircraft and held clear whilst (with difficulty) alerting the TWR controller to their implied crossing clearance. At this point the controller recognised the ATC error.

On 12 January 2007, a Gulfstream G-IV being operated by the Swedish Air Force and about to depart with passengers for Bremen was cleared to cross an active landing runway at Berlin Tegel in normal night visibility when traffic had already been cleared to land on it after both the GND and TWR controllers had failed to establish where the aircraft had been parked and was thereafter located. The flight crew recognised that it would be inappropriate to proceed and stopped their aircraft.

An Investigation was carried out by the BFU Germany. ATC R/T recordings were available but by the time it was requested, the SMR recording covering the time of the event had been routinely deleted after ten days.

It was established that the Gulfstream aircraft, with 8 occupants and operating on a Swedish Air Force call sign and parked on the northern apron used by military flights rather than the southern apron adjacent to the civil passenger terminal, had obtained start-up clearance and taxi clearance from GND and requested runway 26R for departure. With the aircraft commander acting as PF, the aircraft taxied towards the runways. When the GND asked if the crew wanted to use 26L for take off since this would allow for an earlier take-off, the crew accepted. Shortly before reaching the CAT-II/III hold for runways 26R/26L from the north side, GND instructed the crew to change to TWR. No coordination had taken place between GND and TWR concerning the transfer. Shortly before the Gulfstream came on frequency the TWR gave a landing clearance for 26R, which was being used for landings which enabled 26L to handle departures. Upon checking in with TWR, with "approaching CAT three holding runway 26 right" TWR responded with “hello, line up runway 26L" to which the Gulfstream Co-pilot replied with “line up, eh, runway two six left … and tower … confirm cleared to cross." TWR replied "… there is no need to cross two, eh, just line up runway two six left" and the Co-pilot replied with “line up, eh, two six left …” After some intervening transmissions, during which the Gulfstream has observed a stream of landing traffic on the approach to 26R with the leading one very close and stopped the aircraft before crossing the holding point, the Gulfstream Co-pilot called TWR again to and said … continue and crossing runway two six, eh, to two six left" as a result of which TWR responded with "… please confirm do you request two six right for departure or do you want to depart on two six left?" Realising that the co pilot had been hesitant about crossing, the commander transmitted “we are coming from the military apron and to get to the two six left we need to cross two six right.” At this point the TWR controller finally achieved correct situational awareness. 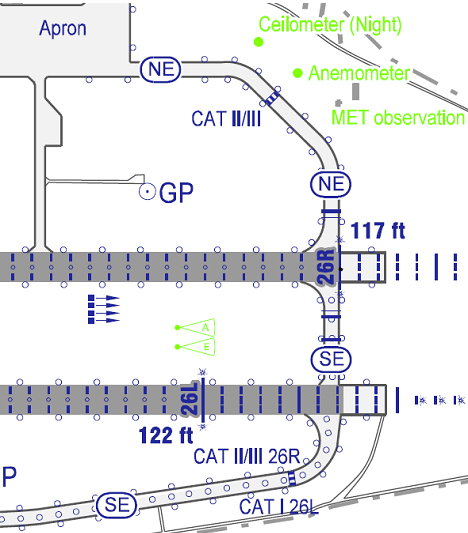 It was established that both pilots and both controllers were experienced in their roles. Both the GND and TWR controller stated that they had assumed without checking that the Gulfstream had taxied from the southern apron. It was noted that SMR was available to the TWR but that “the radio communication recordings and the indications of the TWR controller indirectly suggest that she did not integrate the information available on the SMR monitor into her situation awareness when she issued clearances. It was also established that although stop bar lighting was installed at the CAT-II/III holding positions on both sides of the 26L/26R threshold, they had been switched off at the time of the incident.

The Investigation was advised that “more than 80% of all aircraft movements at Tegel occur between the southern apron and the runways. It was found that prevailing ATC procedures required that controllers should use the SMR for the monitoring and controlling of aircraft and vehicles on the manoeuvring area “by night” regardless of surface visibility

It was noted that from the perspective of the Gulfstream crew, they had no reason to doubt that ATC understood the location of their aircraft once they had been working GND and so it was reasonable to initially assume that TWR also knew where they were. In the end, it was considered that “only the fact that the crew doubted the instruction (to proceed) several times, and…insisted on an explicit clearance to cross runway 26R” had disabused her erroneous assumptions.

Because the Gulfstream had stopped before crossing the north side Cat 2/3 holding point, it was considered that there had been “no immediate risk of an accident”.

The Investigation determined that the Cause of the incident was the issuing of a clearance by ATC on the basis of inadequate situational awareness.

It was also considered that there were two Contributing Factors were:

The Final Report of the Investigation was published in September 2008. No Safety Recommendations were made.