On 2 April 2011, the crew of a Gulfstream G650 undertaking a pre-type certification experimental test flight take off with one engine intentionally inoperative were unable to recover controlled flight after a wing drop occurred during take off. The aeroplane impacted the ground without becoming properly airborne and was destroyed by a combination of the impact and a post crash fire with fatal injuries to all four occupants. The subsequent Investigation found that preparation for the flight had been inadequate and had failed to incorporate effective response to previous similar incidents where recovery had been successful.

On 2 April 2011, a Gulfstream G650 being operated by the manufacturer on a pre type-certification test flight failed to become properly airborne when attempting a take off from Roswell for a local flight in normal daylight visibility with one engine intentionally inoperative. The right wing had been observed to touch the runway before the aeroplane impacted ground obstacles and caught fire with the resultant deaths of all four Gulfstream employee occupants and destruction of the airframe.

An Investigation was carried out by the National Transportation Safety Board (USA) (NTSB). It was found that the aeroplane had stalled whilst lifting off the runway and still in ‘ground effect’ and that the SPS had not operated prior to the stall. It was noted that ground effect results in increased lift and reduced drag at any given angle of attack (AOA) as well as reducing the AOA at which an aerodynamic stall will occur. It was found that this had been considered during the preparations for G650 field performance test flights but the effect on the stall AOA in ground effect had been over-estimated so that SPS activation and the corresponding PFD pitch limit indicator had been set too high. In the investigated event, the flight crew of two pilots and two flight test engineers had also not had any tactile or visual warning before the actual stall occurred. 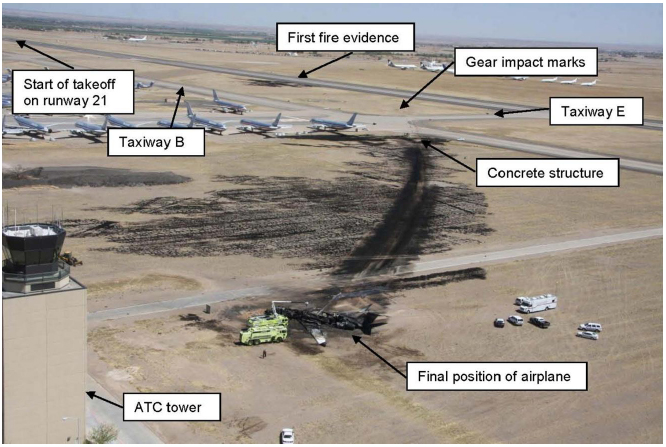 The reconstructed accident flight trajectory reproduced from the Official Report

It was noted that the investigated event was the third time that an outboard right wing stall had occurred during take offs as part of G650 flight testing (although without wing tip ground contact) and that the manufacturer had failed to determine the cause of two previous uncommanded roll events before continuing with the test programme. It was concluded that “if Gulfstream had performed an in-depth aerodynamic analysis of these events shortly after they occurred, the company could have recognised before the accident that the actual in-ground-effect stall AOA was lower than predicted”. Instead, and under perceived pressure to meet take off performance targets and a projected type certification date, a response based on a modification of piloting procedure had been introduced which had not been validated using a simulation or any scientifically-based dynamic analysis.

It was noted that the manufacturer’s “Flight Test Standard Practice Manual” had not been “required to be enforced or updated as circumstances warranted”. It was considered that “the Company’s key engineering and oversight errors” that led to the accident might have been prevented had the Company “better designed the organisational processes used during G650 developmental flight testing….codified those processes in a flight test standard operations manual and trained its personnel” accordingly.

It was noted that since the Federal Aviation Administration (FAA) did not have any direct oversight of the policies and procedures used during developmental flight testing, it could not require the use of an approved flight test operations manual. It was therefore considered that formal guidance to assist manufacturers in the development, implementation and maintenance of an effective flight test operations manual would be appropriate.

On a point relating to post crash response, it was considered that the airport Rescue and Fire Fighting Services would have benefited from prior awareness of a (relatively) high risk flight departure and that the onus for this lay with the aeroplane operator.

The NTSB determined that the Probable Cause of this accident was:

“an aerodynamic stall and subsequent uncommanded roll during a (one engine inoperative) takeoff flight test, which were the result of:

The Board also concluded that

“contributing to the accident was Gulfstream’s failure to effectively manage the G650 flight test program by pursuing an aggressive program schedule without ensuring that the roles and responsibilities of team members had been appropriately defined and implemented, engineering processes had received sufficient technical planning and oversight, potential hazards had been fully identified, and appropriate risk controls had been implemented and were functioning as intended”.

Ten Safety Recommendations were issued as a result of the Investigation as follows: