On 5 September 2015, a Boeing 737-800 cruising as cleared at FL350 on an ATS route in daylight collided with an opposite direction HS 125-700 which had been assigned and acknowledged altitude of FL340. The 737 continued to destination with winglet damage apparently causing no control impediment but radio contact with the HS 125 was lost and it was subsequently radar-tracked maintaining FL350 and continuing westwards past its destination Dakar for almost an hour before making an uncontrolled descent into the sea. The Investigation found that the HS125 had a recent history of un-rectified altimetry problems which prevented TCAS activation.

On 5 September 2015, a Boeing 737-800 (3C-LLY) being operated by CEIBA Intercontinental on a passenger flight from Dakar to Malabo, Equatorial Guinea with a planned intermediate stop in Cotonou was in the cruise at FL 350 in day VMC when it reported a mid-air collision with an opposite direction aircraft. This aircraft was an HS 125-700 (6V-AIM) being operated by Senegalair on a medevac flight from Ouagadougou to Dakar and cleared to maintain FL 340 so as to pass the opposite direction 737 with 1,000 feet clearance. The 737 continued a reportedly normal flight overflying Cotonou direct to Malabo despite sustaining wingtip damage but there was no further radio contact with the HS 125. It was subsequently observed on radar maintaining FL350 and progressing westwards on the flight planned track before passing over Dakar and continuing offshore on the same track before eventually beginning an apparently uncontrolled descent into the sea. No wreckage was found and the 7 crew and passengers on board were presumed to have been killed.

An Investigation by the BEA Senegal was commenced the same day. A search for wreckage from the 125 was conducted but was not successful. The FDR and 2-hour CVR from the 737 were removed and downloaded by the BEA France between the 26 and 30 October 2015. The FDR data showed that the aircraft had been level at FL 350 throughout its cruise with the AP and A/T engaged and also "confirmed normal function of both the transponder and TCAS". An ATC radar recording was available which showed most of the post-collision flight path of the 125 and the recorded R/T exchanges between ATC and both aircraft were also available.

It was established that after departing Ouagadougou, the 125 had climbed to FL340 to cruise but had subsequently requested and been cleared to FL380 for weather avoidance by Bamako ACC. On encountering significant turbulence at FL 380, a request to climb to FL400 was approved but when this level was still turbulent, a descent back to FL340 was requested. FL 360 was initially approved and then the crew requested FL340 which they reported reaching and maintaining. As the aircraft approached the Mali/Senegal border at waypoint GATIL after passing ENINO at FL 340 on ATS route UA 601 (see the chart extract below), an approval for a deviation left of track for weather avoidance had been obtained. First contact of the 125 with Dakar Control, in an area without radar or CPDLC coverage, was a request for continued deviation to the left of track for weather avoidance. The initial ATC response was to maintain FL340, report passing the 'TD' (Tambacounda) VOR and squawk 5040. The response from the 125 crew acknowledged the next required report and confirmed the squawk but not the 'maintain FL 340' which required a further request from the controller before it was obtained. Three minutes later, the crew asked for confirmation that the squawk was 5040 and this was confirmed.

An extract from the AIS upper route chart showing the relevant area. [Reproduced from the AIP]

There were no further calls from the 125 but as it entered the area of radar coverage 10 minutes after the time of the collision, it was seen on the flight planned route at FL 350 instead of the assigned FL 340 and with a squawk of 5004 instead of the assigned 5040. It was observed to continue at FL 350 and pass overhead its destination at that level before continuing on the same track out to sea. When the aircraft reached 48 nm beyond Dakar some 55 minutes after the collision had occurred, the radar returns showed it leaving FL 350 and almost immediately turning to the right and then to the left. Descent continued and the aircraft disappeared from radar as it passed FL 126 at 59 nm from Dakar.

The 737 departed Dakar having filed a flight plan to cruise at FL350. It was transferred from TWR to APP and initially cleared to climb only to FL 290 because of conflicting traffic. Once this had been passed, it was re-cleared to FL350 and transferred to Dakar Control which instructed it to maintain FL350 and report at GATIL. Fourteen minutes later the 737 called at GATIL and was instructed to contact Bamako Control. Only then did the crew advise that they had just passed an opposite direction aircraft descending through their level and that they wanted to file a "near miss collision" concerning this traffic which they initially said had "passed very close to them". ATC acknowledged this and immediately called the 125 but there was no response. The 737 crew then said that they suspected that the traffic in question had struck their wing but that "everything is OK and under control". On hearing this, ATC then advised the 737 crew of the 125 traffic heading for Dakar which had been cleared in the opposite direction at FL 340. It was subsequently established that the 737 crew had not only seen the other traffic but had "felt a shock" and had seen afterwards that the right winglet was torn at the top. The aircraft was eventually transferred to Bamako and it subsequently did not land in Cotonou as planned but overflew it and went directly to the Operator's base in Malabo Equatorial Guinea, which required more than three hours flight after the collision. After landing, damage to the upper right side winglet which corresponded with the crew's accounts of the collision was found (see illustration). 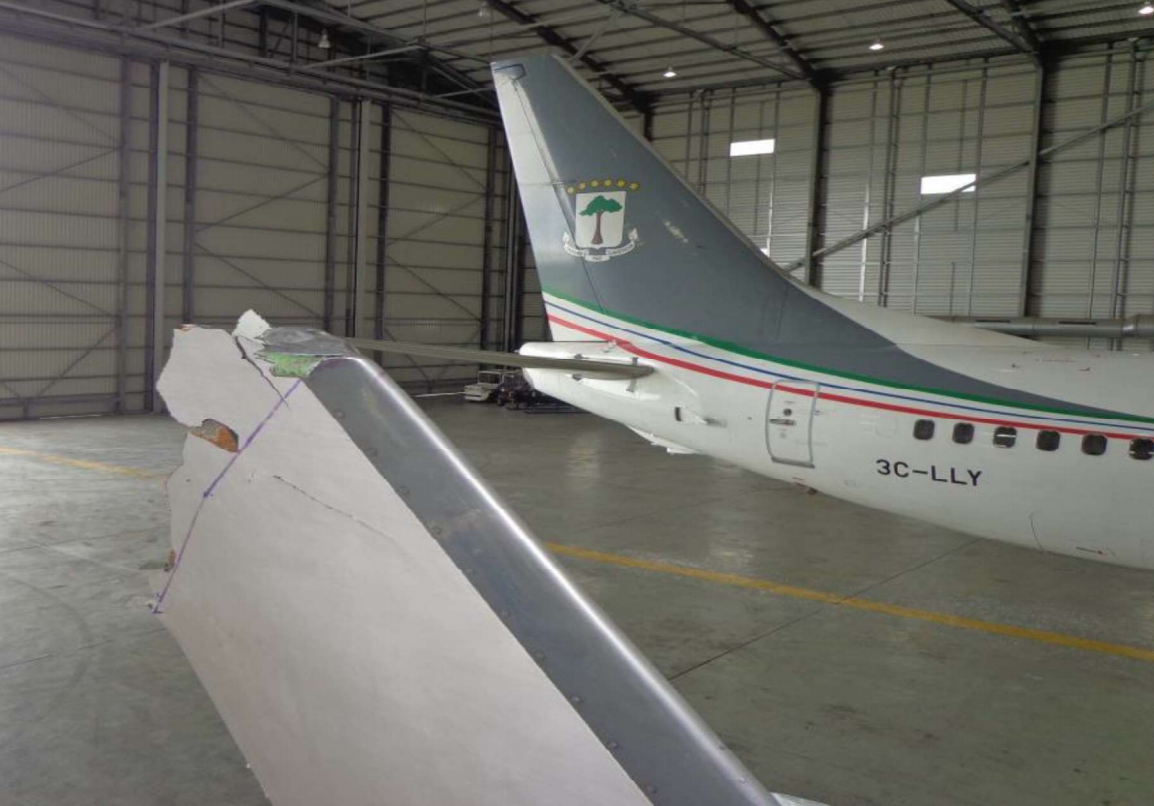 Damage to the right winglet of the 737 found after flight. [Reproduced from the Official Report] 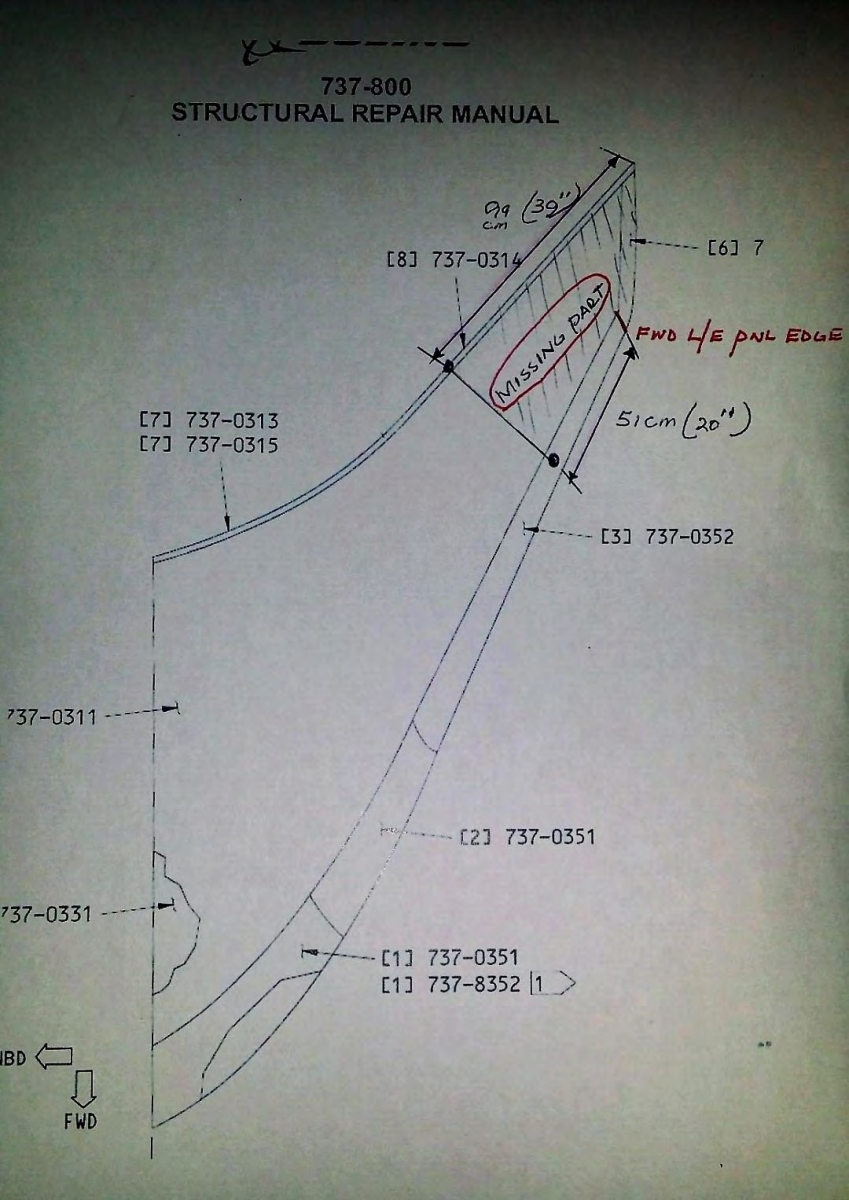 A drawing showing the dimensions of the wingtip damage to the 737. [Reproduced from the Official Report]

The assembled evidence indicated the following:

The Investigation considered possible explanations for the un-rectified altimetry discrepancy and concluded that the most likely explanation, as foreseen in ICAO PANS-ATM, could be that the selected transponder was faulty, in which case a radar-equipped ATC Unit would have been able to see that the aircraft was not at the assigned altitude and request that the alternate transponder be used to ensure that the safety net provided by TCAS would be effective. Alternatively, but considered less likely, would be if there was an undetected discrepancy between the altitudes displayed on the two main altimeters with the faulty altimeter on the same side as the engaged AP but with the opposite side transponder in use. In that case, the AP would take up the (wrong) altitude but the transponder would correctly transmit this altitude so that again, a radar equipped ATC Unit would be aware. In this case however, TCAS would continue to function pending detection of the error. However, since copies of relevant maintenance documentation had not been available and in particular because neither the flight recorders nor relevant items of wreckage had been recovered, it was impossible to identify a definitive explanation for the malfunction which had been the origin of the collision.

As context for the performance of Senegalair as an aircraft operator, it was noted that:

In respect of ATC, it was additionally noted that:

The Probable Cause of the collision was formally recorded as:

"The HS125's non-compliance with its flight level - it was at the FL 350 which was the level assigned to the Boeing 737 even though minutes before the collision, its crew had confirmed to ATC that they were maintaining FL 340. The Captain of the Boeing 737 reported having seen the other aircraft descend into them."

A total of 11 Safety Recommendations were made as a result of the Investigation as follows:

Four Safety Recommendations were made in the Preliminary Report published on 14 December 2015:

Seven more Safety Recommendations were made on completion of the Investigation:

The Final Report (Part 1, Part 2, Part 3) was completed on 1 August 2017 in the French language only and subsequently published.

Editor’s Note: In the absence of a published English Language translation of the Official Report, this summary has been prepared on the basis of an informal translation and no responsibility can be taken for any errors that may have resulted from this.