On 10 November 2015, the crew of an HS 125 lost control of their aircraft during an unstabilised non-precision approach to Akron when descent was continued below Minimum Descent Altitude without the prescribed visual reference. The airspeed decayed significantly below minimum safe so that a low level aerodynamic stall resulted from which recovery was not achieved. All nine occupants died when it hit an apartment block but nobody on the ground was injured. The Investigation faulted crew flight management and its context - a dysfunctional Operator and inadequate FAA oversight of both its pilot training programme and flight operations.

On 10 November 2015, a BAe HS125-700/ Hawker 700A (N237WR) being operated by Execuflight on a business charter flight from Dayton Wright Brothers to Akron with 2 pilots and 7 passengers on board failed to complete a non-precision approach to runway 25 at destination made in day IMC and crashed into a four-unit apartment block and was destroyed by the impact and post-crash fire. All on board were killed but there were no injuries to persons on the ground. 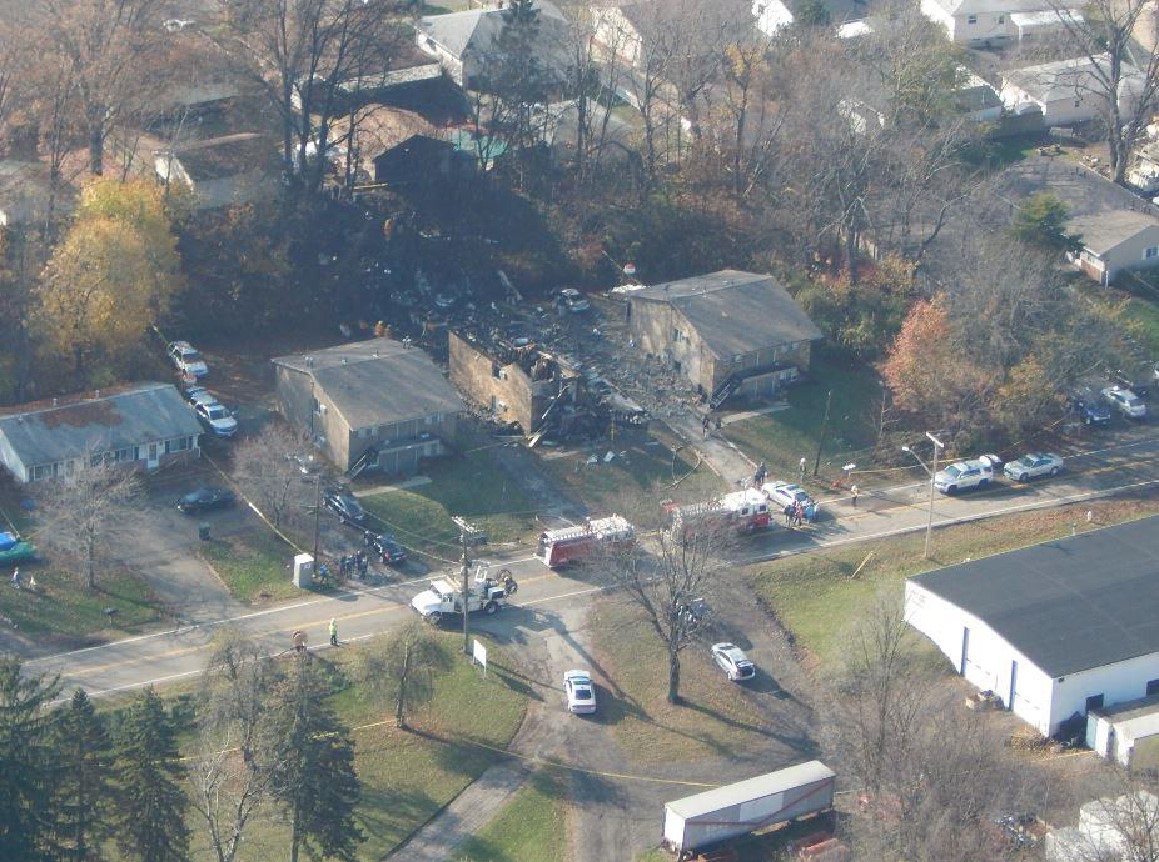 The accident site [Reproduced from the Official Report]

An Investigation was carried out by the NTSB. The aircraft was not fitted with an FDR nor was it required to be. The 30 minute CVR was recovered from the wreckage and its data were successfully downloaded but due to a loud tone of around 400 Hz and associated harmonics, the quality of the recording was poor.

The 40-year old Captain was a Columbian national and held FAA and Columbian professional pilot’s licences. He had about 6,170 total flying hours which included about 1,020 hours on type of which 670 were in command. Since joining Execuflight five months prior to the accident, he had flown about 167 hours. The 50 year-old First Officer was an Italian national with an FAA licence and was PF for the accident flight. He had joined Execuflight three days before the Captain and had about 4,382 hours total flight time which included 482 hours on type, all as second-in-command. Multiple independent sources stated that "neither pilot had difficulty understanding or communicating in English". The Investigation found that Execuflight did not hold all the prescribed information about the previous backgrounds of either pilot. The Captain was found to have had his previous employment by a Part 91 operator terminated ten days after he had failed to attend Hawker 800A recurrent training just over a month before he joined Execuflight. The First Officer had also had his previous employment terminated after performance recorded as consistently and significantly below "acceptable standards" during conversion training for a Boeing 737 type rating just over three months prior to joining Execuflight.

It was established that the accident flight had been the pilots’ second flight of the day on the second day of a planned 2 day 7 sector trip with the same pilots and passengers on board for each sector. The previous sector had been from Cincinnati Municipal to Dayton Wright Brothers. On departure for Akron, the flight climbed to 17,000 feet. During the cruise, the pilots unknowingly selected the incorrect frequency for the Akron Automated Surface Observing System (ASOS) and based their subsequent briefing for the Akron LOC approach to runway 25 on the weather for another airport 108 miles southwest of their destination. CVR data showed that although the intended runway 25 approach had a MDA of 1,540 feet, when the First Officer asked the Captain what the MDA was, he replied with the MDH. Further confusion followed when the crew appeared to mix up the MDA/MDH for alternative (RNAV) approaches to runway 25 with the LOC approach they were going to fly when the First Officer was attempting to establish the field elevation. Eventually, the MDH of 473 feet was understood.

The aircraft subsequently descended through 10,000 feet at just under 300 knots, contrary to the applicable permitted maximum of 250 KIAS. A minute later, the correct frequency for the Akron ASOS was tuned and gave the weather as overcast at 600 feet with visibility ½ mile in mist with a surface wind of 240° / 8 knots. Akron APP instructed the flight to slow up as the one ahead was slower and had not yet made an "on-the-ground" report. The aircraft established on the LOC and levelled at 3,000 feet QNH as restricted by ATC and the First Officer stated that he would slow up and take gear and flap early to assist this. The Captain noticed an abnormally high pitch attitude developing and commented accordingly. Radar evidence showed that at this time, the pitch attitude had increased from 5° nose up to 12° nose up in the space of one minute whilst the estimated airspeed had dropped from 150 knots to 125 knots.

With 4 nm to go to the FAF (final approach fix) for the selected LOC approach procedure - equivalent to about 1 nm to the FAF which would need to be crossed at the minimum permitted 2,300 feet in order to maintain a CDFA - ATC cleared the aircraft to descend on the LOC and complete the approach. However, level fight continued for a further 2 minutes before descent began (see the illustration below). During this time, the Captain alerted the First Officer to the low airspeed - 120 knots - and commented that the First Officer could not keep decreasing speed. When the First Officer responded with "why", the Captain replied "because we gonna stall. I don't want to stall". The APP controller then instructed them to change to the local advisory radio frequency and soon afterwards, the crew of the aircraft which had just landed there off the same approach advised that they had "broken out at minimums (right at a) mile" to which the Captain responded "appreciate it". 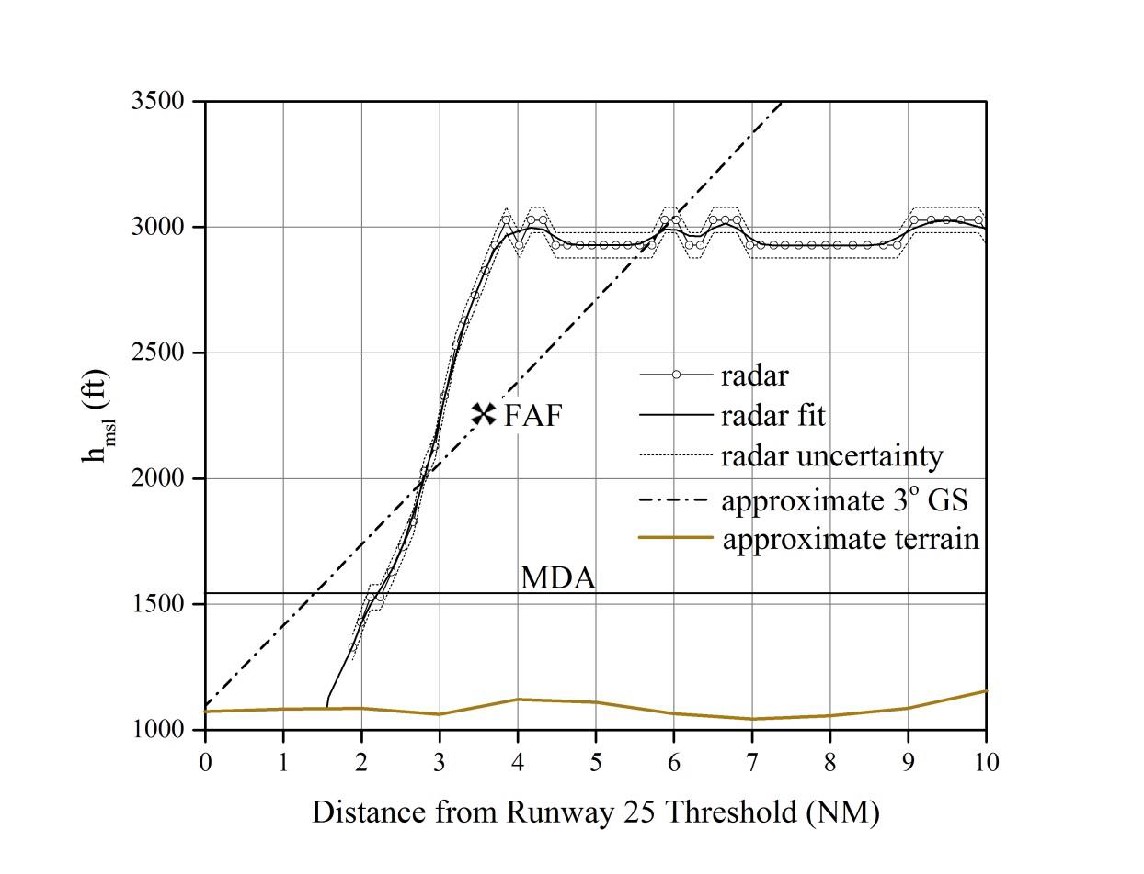 Just before descent from 3,000 feet was commenced, the First Officer called for full flap (45°) and the airspeed began to reduce from 130 knots. The FAF was crossed just over 10 seconds later at 2,700 feet QNH with the aircraft at an estimated 109 knots and an increasing rate of descent. Ten seconds later, the descent rate had reached about 2,000 fpm and the Captain said with emphasis, "don't dive....don't go two thousand feet per minute... when you're 1,500 feet above the ground or minimums".

Thereafter, radar data indicated that 40 seconds after passing the FAF, the aircraft had reached and continued below the MDA in the absence of the prescribed visual reference with an airspeed of approximately 113 knots and an 830 fpm rate of descent. Four seconds after MDA, the Captain stated, “ground... keep going” followed a few seconds later by “okay level off guy”. Almost immediately, "the CVR recorded a rattling sound consistent with the activation of the stick shaker" followed three seconds later by the same again and two seconds after that by an EGPWS 'PULL UP' annunciation. The first sounds of impact followed after a further two seconds. A motion activated security camera captured a view of the aircraft in a left-wing-down attitude about 1.8 nm from the runway threshold and "an explosion and post crash fire were observed on the video" just after the aircraft went off camera. Witnesses saw the aircraft descending in a left-banked turn before it hit the apartment building. The building and two nearby cars as well as the aircraft were destroyed by the impact and fire and two other adjacent buildings were also damaged by the fire. It was concluded that "the impact forces of the accident were survivable for some occupants, but the immediate and rapidly spreading post-crash fire likely precluded the possibility of escape". It was estimated that the AoA at the time control was lost "exceeded 15°" and noted that according to the aircraft manufacturer, the critical (stalling) AoA with flaps at 45° is 15.5°.

A large number of procedural irregularities and organisational failures relevant to the accident flight and to flight operations by Execuflight generally including significant regulatory non-compliance were identified during the Investigation. Some evidence was also found that duty for both pilots during the four days prior to the accident, and especially for the Captain, had resulted in "maximum sleep opportunities" between duties which were restricted enough to be conducive to fatigue.

It was determined that the Probable Cause of the Accident was "the flight crew’s mismanagement of the approach and multiple deviations from company standard operating procedures, which placed the airplane in an unsafe situation and led to an unstabilised approach, a descent below minimum descent altitude without visual contact with the runway environment and an aerodynamic stall."

Thirteen Safety Recommendations were made as a result of the Investigation as follows:

The Final Report of the Investigation was adopted by the Board on 18 October 2016.