On 20 August 2011, a RAF Aerobatic Team Hawk failed to complete a formation break to land near Bournemouth and the aircraft flew into the ground, destroying the aircraft and killing the pilot. The subsequent Inquiry concluded that the pilot had become semi conscious as the result of the sudden onset of G-induced impairment characterised as A-LOC. It was found that the manoeuvre as flown was not radically different to usual and that the context for the accident was to be found in a range of organisational failures in risk management.

On 20 August 2011, a RAF Aerobatic Team (RAFAT) BAE Hawk T Mk1 (XX179) manoeuvring for landing at Bournemouth after participating in a nearby display under call sign Red4 failed to complete a high speed low altitude turn in day Visual Meteorological Conditions (VMC) and lost height before impacting the ground. There was no post crash fire but the aircraft was destroyed by the impact and the pilot fatally injured.

An Investigation was carried out by a Service Inquiry Panel in accordance with a Convening Order issued by the Director General of the Military Aviation Authority and requiring the provision of technical investigation/assistance by the UK Military AAIB (MilAAIB). Available evidence included the validated recording of the Air Data Recorder (ADR), an airborne video recording, limited R/T communications recording, eye witness accounts and, in respect of the context of the event once the key facts had been established, previous relevant experience of manoeuvres in high G flight.

It was established that following a high speed close formation flypast of the whole nine aircraft display team along the landing runway (08) at 100 feet aal in the landing direction, the pre-planned routine ‘break to land’ manoeuvre was flown in which each aircraft successively makes a climbing turn to either left or right hand downwind to reach 500 feet aal downwind. The accident aircraft (identified as Red 4) was observed to reach the targeted height at the apex of the turn but to then progressively overbank with a “progressive downward steepening” of the flight path. The aircraft immediately behind transmitted two radio warnings of “4 check height” but ground impact followed shortly afterwards.

Analysis of the ADR showed that in commencing the break climbing through approximately 230 feet agl and at 384 KIAS, Red 4 had “rolled to approximately 75° of right bank, an acceleration of 6.3 G was applied, the throttle was selected to idle and the airbrake extended”.

The Investigation found that weather conditions and the pre departure airworthiness of the aircraft were not a factor in the accident. It was also noted that “the pilot had not indicated any serviceability issues in flight”. All other aspects of the period preceding the accident flight and of the flight itself were also determined to be not a factor.

The efficacy of the ADR trace was rigorously validated and thereafter provided crucial evidence of the 14.5 seconds of flight from the beginning of the break to the end of the trace at impact. It was established from the trace that the initial pull to 6.3 G had been accomplished in less than a second - at a rate of 6.9 G/second. For the next 5 seconds, it was found that “the pilot’s control inputs and the resultant flight profile were normal and typical of previous breaks albeit at the high end of G, G-onset rate, pitch attitude and bank angle”. At that point, “the pilot’s control strategy appeared to become abnormal in that his control inputs and their frequency were reduced”. One second later, “a further anomaly appeared when the pitch attitude stabilised unusually low at 2°nose down and one second later an abnormal/atypical throttle movement was observed, which would have given a theoretical engine rpm of 77+/- 3%”. Control abnormalities continued and nose down pitch attitude increased and a gradual but progressive overbank to the right developed. By three seconds prior to impact the aircraft had reached approximately 16° nose down with a 95° bank to the right and had descended to approximately 250 feet agl. At this point, the following aircraft transmitted “4 check height” and almost co-incident with this, “a rapid aft and left stick input (half of full deflection) was demanded” and the nose down pitch and right bank began to reduce - although the aircraft continued to descend. “With the airbrake extended and the airspeed at approximately 275 KIAS, the G level peaked at +4.25 G which resulted in (the aircraft) being very close to, if not in, the accelerated stall boundary just before the end of the trace.”

In order to make an assessment of the pilot’s level of situational awareness during the break manoeuvre, the Investigation recreated a plot of G against indicated air speed and compared it with the theoretical lift buffet boundary - see the diagram below. Lift buffet is readily distinguishable from concurrent airbrake buffet and normally used to fly the aircraft (just) in buffet so as to achieve its maximum performance capability whilst simultaneously increasing drag to reduce speed. This plot showed that the aircraft was flying in lift buffet from shortly before maximum G was achieved until the commencement of aircraft control abnormalities. It was noted that to a pilot in a normal state of consciousness, ‘coming off the buffet’ would have been obvious. 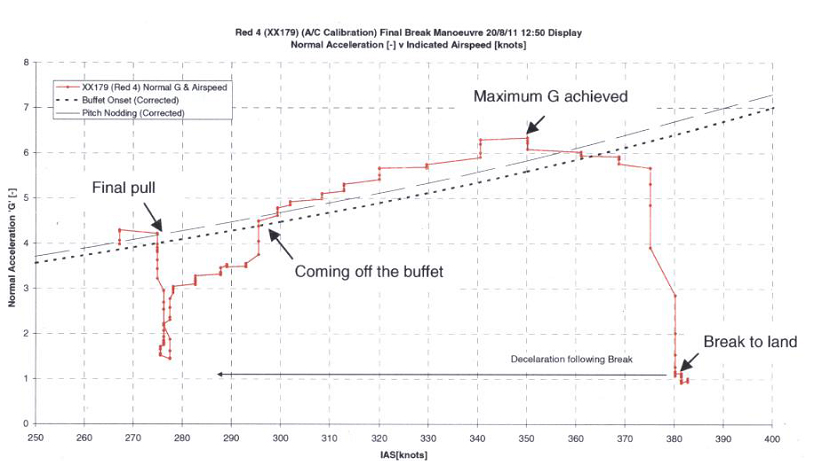 This observation led to the early conclusion that G-induced impairment “was a possible cause” of the accident.

However, it was recognised that such a diagnosis could only be made with confidence by exclusion. The Investigation therefore proceeded to systematically eliminate all the “non-medical, technical, engineering and HF possible causes”. It was concluded after review that neither technical failure nor engineering action were factors in the accident. The fact that the pilot was found to have only partially fastened thigh zips on his anti-G trousers was considered to be of potential relevance to his g-tolerance.

Most of the rest of the Investigation focused on the subject of G-induced impairment in general and its potential relevance to the observed cessation of normal control. The generally accepted relationship between the rate of onset of high G and the time immediately after the maximum level is reached in respect of the risk of experiencing G-LOC or A-LOC with no prior visual warning signs was noted as being generically in the form of the illustrative diagram below reproduced from the Investigation report.

Notwithstanding that no previous RAF aircraft accident had ever been attributed to G-LOC, the Investigation reviewed data from the most recent RAF G-LOC survey and, after discounting training events, found that the prevalence of such reports amongst current fast jet aircrew was just 6%. This survey also suggested that the initiation of an Anti-G Straining Manoeuvre (AGSM) prior to a reported G-LOC event was by no means universal, also a finding when comparable USAF survey data was examined. The circumstances in all 12 formally reported G-LOC incidents from 2001 onwards were considered. One, to a Hawk QFI pilot flying solo and making a 7.3 G turn had involved a loss of awareness which was described in very similar terms to those which could have explained the apparently semi conscious state of the pilot of the accident aircraft i.e. A-LOC but not recognised as such at the time. Another, to a Typhoon pilot, was found to have involved blackout with no pre-onset symptoms. There was, however, a concern that although unit level action had definitely followed some of these events, there was no adequate formal record of such responses. These and further work led to the conclusion that A-LOC was the most likely cause of the loss of the accident aircraft.

The remainder of the Investigation “then sought to examine what defensive barriers may have been breached or may have been absent for this accident to occur – essentially an examination in considerable detail of the wider context of the accident”. It was noted in this work that:

An assessment of the “cultural attitude to G” amongst RAFAT pilots found that nearly all those interviewed had reported experiencing ‘grey-out’ and some loss of peripheral vision and led to the following conclusions:

a) A lack of G reporting and management may have masked the requirement for more frequent G-awareness training.

b) G-LOC was not considered to be a high risk event.

c) Manoeuvres were not individually assessed for their G-LOC potential.

d) An incorrect mental model of the Flat Left/Right break (as made immediately prior to the investigated accident) may have influenced pilots’ perceptions of G-LOC risks.

e) From the 2 in-cockpit videos available as evidence, re-active AGSMs appeared to have been undertakenfacto during the break to land and the techniques observed were assessed as non-optimal by a RAF Centre of Aviation Medicine expert.

f) The audio evidence from in-cockpit video was invaluable in assessing when pilots commenced straining during manoeuvre. A cockpit voice recording from the accident aircraft would have significantly assisted the investigation

g) Overall, the cultural attitude to G was assessed as a contributory factor in the accident.

After a review of aircrew training in relation to G-awareness, it was further concluded that, taken overall, it was inadequate. It was considered that:

The potential effect on the accident aircraft pilot of various physiological factors was undertaken with the effects of three - dehydration, minor illness and fatigue - being identified as of potential relevance on the day.

A review of custom and practice versus the extent of SOPs in respect of the break to land procedure was carried out and disclosed that the latter were absent in respect of many key criteria. “It was apparent that there was no targeted entry speed, no maximum entry speed, no defined procedure for calling ‘hot’ (indicating a higher than usual entry speed) no prescribed technique for the break itself and, by default, no explanation of how the break technique should be altered if ‘hot’ was called.” More generally, a review of G-LOC risk management and the wider context of general risk management was made and a series of “anomalies” were found and documented.

The Investigation concluded that the Cause of the accident (defined as the trigger for it on the day) was “G-induced impairment (A-LOC) of the pilot leading to flight into terrain”.

Eight Contributory Factors (defined as items that collectively resulted in defensive weaknesses) were identified as follows:

(1) The combination of break manoeuvre speed and technique resulting in rapid G onset rate to high G for a sustained period.

(2) The absence of clearly defined SOPs for the break.

(3) The 500 ft circuit height resulting in insufficient height to recover.

(4) The cultural attitude to G resulting in a false sense of security.

(7) Inadequate Risk Management within 22(Training) Group and the RAFAT

(8) Inadequate assurance procedures within and of the RAFAT

One Probable Contributory Factor (defined as one which was based on precedence from trends or other data sources) was identified:

Seven Possible Contributory Factors (defined as one which could not be positively excluded) were identified as follows:

(1) Reduction in the effectiveness of the pilot’s anti G trousers, due to the thigh zips not being fully closed.

(5) Acute cervical pain resulting in a distraction from performing an effective AGSM.

(7) Absence of a ‘hot’ call that may have acted as a mental prompt to ensure that an appropriate AGSM was applied from the outset of the break.

One Aggravating Factor (defined as one which made the outcome worse) was identified as:

(1) An initial inability to locate the rural crash scene

A total of 40 Safety Recommendations were made as a result of the Investigation. In accordance with standard practice, the Head of the MilAAIB is responsible for tracking the implementation of all of them. Many were directly targeted at specific duty holders and were in respect of the wider organisational context in which the accident had occurred. Others were directed specifically at mitigating the risk of G-impairment in the RAFAT and in other advanced training use of the same aircraft and during operation of other fast jet types. The latter were as follows:

The Comments of the Convening Authority published with the Final Report included the following remarks:

The Official Report of the Investigation (in 8 separate sections) was published on 18 December 2012 by UK Ministry of Defence.