On 13 August 2012, an Ilyushin IL76 freighter overran landing runway 11 at St John's at 40 knots. The Investigation established that although a stabilised approach had been flown, the aircraft had been allowed to float in the presence of a significant tail wind component and had not finally touched down until half way along the 2590 metre long runway. It was also found that reverse thrust had then not been fully utilised and that cross connection of the brake lines had meant that the anti skid pressure release system worked in reverse sense, thus reducing braking effectiveness.

On 13 August 2012, an Ilyushin IL76TD-90VD Freighter (RA-76511) being operated by Volga-Dnepr Airlines on a scheduled cargo flight (4118) from Prestwick UK to St John's Newfoundland made a deep landing at destination before overrunning the runway and travelling a further 195 metres before coming to a stop. The aircraft was undamaged except for cuts to some tyres resulting from impact with threshold lights when departing the runway and was steered so as to avoid hitting approach lighting installed for the opposite direction use of the runway.

It was established that, prior to the approach, the crew had copied ATIS 'H' which had given the weather as W/V 170°/3 knots, visibility 1½ sm in mist and ceiling overcast at 300 feet agl. They had decided that with an ELW of 140 tonnes and noting that runway 11 was the longest available runway, an ILS approach to that runway would be made. AFM data was used to calculate a required landing distance of 1240 metres (including a stopping distance of 825 metres) and an approach speed of 130 KIAS, increased to 135 KIAS "to account for turbulence and icing".

After visual acquisition of the runway an instant wind check of 260° / 5 knots was passed by TWR and, prior to crossing the threshold at 59 feet agl at 136 KCAS, the crew noted the runway was bare and wet with no standing water. However, the aircraft then floated before touching down at 118 KCAS over 1000 metres beyond the threshold then bouncing to a final main gear touchdown halfway along the runway at 113 KCAS.

Recorded data showed that maximum reverse on engines 1 and 4 had been quickly selected after the final touchdown followed by the ground spoilers. Subsequently, with the speed recorded as 63 KCAS and the aircraft just 348 metres from the end of the runway, reverse thrust on engines 1 and 4 was briefly reduced to 50% before being increased to maximum again and maximum reverse thrust on engines 2 and 3 added. An estimated 2 seconds after this, the aircraft departed the end of the runway at 40 knots damaging five threshold lights. However, the crew had manoeuvred the aircraft to the right of the extended centreline to avoid the multiple rows of approach lights and none of these were hit. The aircraft came to rest on the Runway 11 localiser service road about 50 feet from the localiser antenna, on a heading of approximately 064°M some 195 metres beyond the end of the runway (see the illustration below). 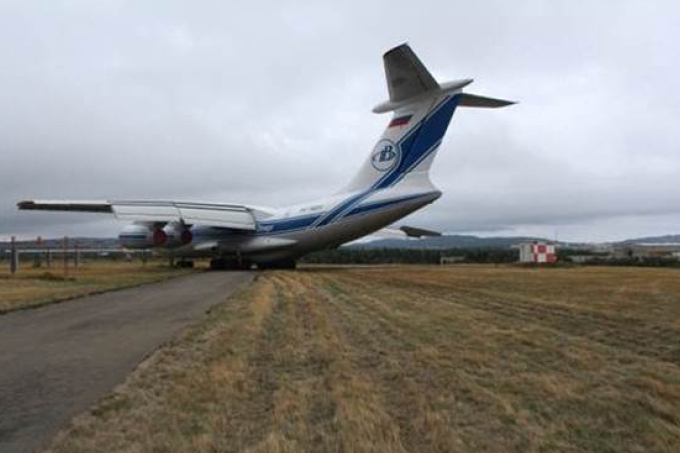 It was found that the aircraft commander had been PF for the approach and landing and that both he and the First Officer were experienced on the aircraft type, although neither had been to St John's "in almost a year" and it was the commander's first landing on runway 11.

FDR data was found to indicate that "the average tail wind component during the 15 seconds prior to initial touchdown was 12.95 knots" - in excess of the AFM maximum 10 knot tailwind component for landing. It was noted the same information was available on the MFD, but that Operator SOPs for landing and take off limitation purposes was to rely on wind velocity communicated on Automatic Terminal Information Service (ATIS) or direct from ATC.

Following the overrun the surface friction of the accident runway was tested and found to be above minimum required levels but in some cases by only small margins. It was noted that the Aircraft Maintenance Schedule (AMS) applicable to the accident aircraft recommended that "during the autumn-winter season (typically from 1 November to 30 April of the next year) at least 8 of the (16) main gear tyres (should) have a tread pattern in which the 3 middle groove tracks have no less than 1-mm depth of tread remaining". However, it was found that this AMS did not include a similar minimum tread depth for the main tyres when the aircraft was operated during the spring-summer season (May to October).

The Investigation found that all 16 main gear tyres were worn to or below the tyre tread wear indicators and that 8 of them showed evidence of reverted rubber aquaplaning, usually indicative of a locked wheel when anti skid systems fail or are overridden. Corresponding marking of the runway surface was also found. An inspection of the aircraft braking system found that, as configured, "when the antiskid protection function signalled a brake pressure release to an outboard wheel pair, the pressure was being released to the inboard wheel pair" and conversely "when the brake pressure release was signalled to the inboard wheel pair, the pressure was released to the outboard wheel pair". It was established that although the hydraulic pressure supply lines to both inboard and outboard brakes had been installed at build in accordance with the aircraft manufacturer's design assembly chart, they were actually cross connected so that the inboard brakes were connected to the hydraulic pressure supply line for the outboard brakes and vice versa. The effect of this would have been that during operation of the antiskid, the overall effective braking capability would have been reduced since brake pressure would be released at wheels with effective braking but maintained to ones tending to cease rotation. This would account for the observed evidence of reverted rubber 'aquaplaning' on what had been a runway surface without any standing water on which such an effect would not have been expected. It was noted that the aircraft had completed only 45 landings since new, so that the braking system cross connection was highly likely to have existed - undetected - since the manufacture of the aircraft.

It was noted that, like runways at many other Canadian airports used by large transport aircraft, runway 11/29 at St. John's did not have a Runway End Safety Area, nor was this required by regulation but it did have a 60 metre unpaved runway end strip. It was also noted that none of the runways at St. John's had grooved surfaces, nor were such surfaces a regulatory requirement.

The formally stated Findings' of the Investigation as to Risk were as follows:

It was also found that "The Ilyushin IL-76TD-90VD aircraft maintenance schedule does not identify a minimum tread depth for the main tyres when the aircraft operates during the spring-summer season (May to October)".

Safety Action taken as a result of the occurrence was noted to have included the following:

The Final Report was authorised for release on 18 December 2013. No Safety Recommendations were made as a result of the Investigation.