On 2 February 2015, a Jetstream 41 made a hard and extremely fast touchdown at Rhodes and the left main gear leg collapsed almost immediately. The crew were able to prevent the consequent veer left from leading to a lateral runway excursion. The Investigation found that the approach had been significantly unstable throughout with touchdown at around 50 knots above what it should have been and that a whole range of relevant procedures had been violated by the management pilot who had flown the approach in wind shear conditions in which approaches to Rhodes were explicitly not recommended.

On 2 February 2015, a BAE Jetstream 41 (SX-DIA) being operated by Sky Express on a scheduled domestic passenger flight from Heraklion to Rhodes as SEH 100 failed to complete a normal landing on the 3000 metre-long runway 07 at destination following a non-precision approach in day VMC after the main landing gear partially collapsed causing the left wing and engine to drop onto the runway and the propeller to contact the runway. Both the aircraft and the runway surface were damaged, the former substantially, but none of the 19 occupants were injured. 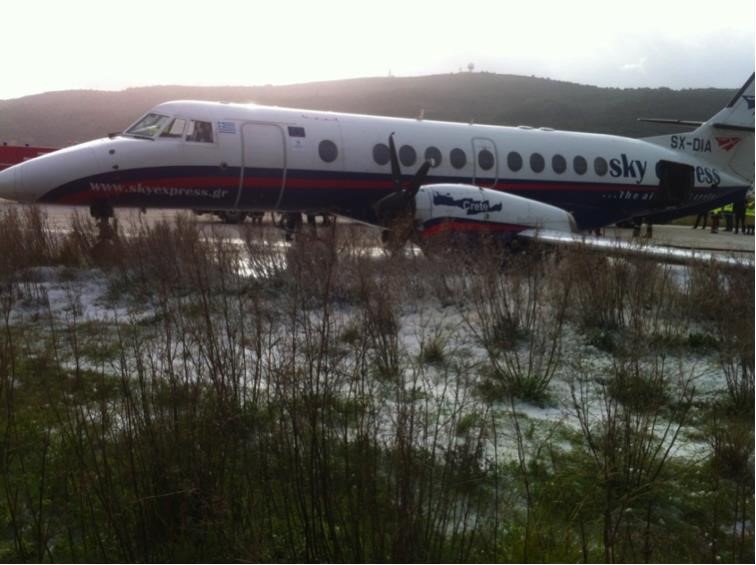 The aircraft in its final stopping position after evacuation of the occupants. [Reproduced from the Official Report]

An Investigation was carried out by the Hellenic Air Accident Investigation and Aviation Safety Board (AAIASB). FDR data were successfully downloaded at the UK AAIB but data from the 30 minute CVR had been overwritten as the action to interrupt its electrical supply after an accident as prescribed in the Operator’s Operations Manual Part ‘A’ had not been taken.

It was found that the 47 year-old Captain, who was acting as PF for the accident flight, had been employed by the Operator for almost nine years and was qualified as an Instructor and Examiner on type. He had accumulated a total of 11,117 flying hours which included 3,574 hours on type and since May 2013 had the Operator’s Flight Operations Manager position. He had been on duty for 75% of the allowable maximum of 190 hours in the 28 days prior to the accident. The 49 year-old First Officer had been employed by the Operator since 2010 and had accumulated 3,834 hours total flying experience which included 1,334 hours on type.

It was established that the flight had departed Heraklion for the 35 minute flight to Rhodes with the crew aware that the surface winds at destination were generally from the south or southeast at a mean speed of 17 knots gusting to 36 knots. On contacting Rhodes TWR 24 minutes after takeoff from Heraklion, the crew were advised that the mean surface wind velocity was from 110° (varying between 020° and 160°) at a mean speed of 20 knots gusting to 38 knots. The TWR controller then reminded the flight crew as per the airport entry in the AIP that a landing was “not recommended” in the prevailing strong wind shear and turbulence and further wind checks showing no significant change as the flight continued towards an intended landing on runway 07 were accompanied by an explicit repeat of the same reminder.

Since the aircraft continued with its approach to runway 07, the TWR controller followed their penultimate wind check with about 4nm to go with the remark that ”runway 07 is free for landing” having already alerted the airport RFFS to position their appliances in the designated at-runway standby positions in accordance with prevailing local procedures. Just under two minutes later, the aircraft touched down right main gear first at a recorded 1.8g which was in excess of the 1.5g threshold for a hard landing. Almost immediately the left main gear collapsed and the aircraft then travelled for a further 40 seconds before coming to a stop, veering to the left before doing so but stopping just before departing the paved surface.

RFFS vehicles reached the aircraft soon afterwards and having observed fuel leaking from the damaged aircraft, immediately applied foam. In the absence of any fire risk, it was decided that the occupants should leave the aircraft by the rear right emergency exit and this began, according to ATC, about 5 minutes later and took approximately 10 minutes.

It was noted that the crew had landed as planned with the flaps set to 9° rather than the normal 25° which is contrary to the specification for approaches which requires either flaps at 15° or flaps at 25°. Although the intended Vref was reported to have been “selected” as appropriate for the non-standard flap setting at 129 knots, FDR data showed that the actual approach had been much faster, with the speed about 20 seconds before touchdown being approximately 188 knots. It was also apparent that “extensive operating of the flight control surfaces in order to keep the flight path lined up with the runway centreline” had been necessary during the approach and that the speed at touchdown was still very high at a recorded 170 knots.

Detailed examination of the failed landing gear assembly concluded that it had been in all significant respects serviceable and had “failed on overload due to the high rate of descent” and the effects of the hard and very high speed touchdown. It was found that although a component in the left main gear shock strut had been incorrectly installed during a recent overhaul, this had not been directly or significantly contributory to the collapse of the complete assembly, which had occurred “at vertical acceleration-generated loads very near the maximum permitted loads (and in the presence of concurrent) horizontal and lateral acceleration”.

The Operator’s applicable Standard Operating Procedures (SOPs) as included in the Operations Manual were reviewed:

The specified procedure included selecting flaps to 15° no later than 2nm from the FAF/FDP and continuing to reduce speed to “below 140 knots”.

It was noted that the Operator required generally that all approaches should be stabilised by 1,000 feet above the runway threshold and must be stabilised by 500 feet above it and that any unusual approach procedure or abnormal condition requiring a deviation from the ‘specified elements’ of a stabilised approach requires a special briefing. These ‘specified elements’ were found to include the requirement that after the FAF, no more than ‘normal’ corrections should be required to maintain the correct flight path to a landing within the touchdown zone, that indicated airspeed should be between Vref and Vref+20 knots and that the rate of descent must be no greater than 1,000 fpm. Approach criteria specific to the Jetstream 41 were noted as including a requirement that they must “at times be stabilised, unhurried and flown configured as described in […] SOPs” with stabilisation achieved and maintained “not later than 1,000 feet agl in IMC and not later than 500 feet agl in VMC”.

The maximum demonstrated crosswind component for the Jetstream 41 is 30 knots, whereas during the whole range of wind direction, the maximum gusts would have put the aircraft above this figure.

Rhodes, which only has a precision approach to runway 25, was identified by the Operator as a Category ‘B’ airport due operational restrictions according to surface winds which create difficult conditions in certain circumstances. The corresponding entry in the Operations Manual Part ‘C’ stated that landing and takeoff at Rhodes was prohibited when the surface wind was between 110° and 180° and the speed exceeded 20 knots “due to associated severe horizontal and turbulent wind shear”.

When comparing the conditions in which the approach had been flown with these SOPs, it was concluded that there had been significant non-compliance and it was found that the First Officer had failed to fulfil the duties of a PM under the principles of CRM to alert the PF Captain to this.

The Probable Causes of the accident were determined to have been:

Two Safety Recommendations were made as follows:

The Final Report of the Investigation was completed on 13 April 2018 and subsequently published in English language translation.