On 23 June 2014, a civil-operated Learjet 35 taking part in a German Air Force interception training exercise collided with the intercepting fighter aircraft as it began a follow-me manoeuvre. It became uncontrollable as a result of the damage sustained in the collision and crashed into terrain, killing both pilots. The Investigation found that whilst preparation for the exercise by all involved had been in compliance with requirements, these requirements had been inadequate, especially in respect of co-ordination between all the pilots involved, with both the civil and military safety regulatory authorities failing to detect and act on this situation.

On 23 June 2014 a Learjet 35A being operated out of Hohn by a civilian contractor as part of a German Air Force interception and identification training exercise involving two Eurofighters from Nörvenich collided with the lead Eurofighter in day VMC conditions as it began a follow-me manoeuvre at 8000 feet. The Learjet crew lost control and were both killed and the aircraft was destroyed by impact with the terrain. The Eurofighter was also damaged but after the pilot had declared a MAYDAY, he was able to successfully recover the aircraft back to Nörvenich.

An Investigation was carried out by the German Bundesstelle für Flugunfalluntersuchung (Germany) (BFU). It was noted that the collision had occurred during a "Renegade" exercise in which two military fighter jets - a Quick Reaction Alert (QRA) deployment - were to conduct an interception and identification exercise on a specifically-deployed contractor aircraft operated by a civilian company which considered that "conducting flights for the armed forces was the main task of the company". Both the Learjet and the two Eurofighters were equipped with CVR and FDR and these and the video recordings of the head up displays of the two Eurofighters were successfully downloaded. The flight paths of all three aircraft were recorded by both military and civil air navigation service radar and these recordings were available.

The exercise during which the accident occurred took place in Class 'E' airspace with both aircraft under the control of the same military Control and Reporting Centre (CRC) but each speaking on a different frequency to controllers seated adjacent to each other. A simulated guard frequency had been notified to both aircraft.

The 33 year-old Eurofighter pilot had about 1465 hours total flying experience including approximately 406 hours on type. It was found that he had flown 42 interception and identification missions in 2013 and 17 in 2014 but his statement that "these missions often ended after the identification without intervention" was noted.

It was established that, with the Learjet at 8000 feet, the Eurofighter formation was instructed to simulate transponder selection to standby and shortly afterwards, with the formation approximately 6 nm from and below the Learjet target, the leader reported having visual contact and the Learjet crew was advised accordingly. The formation leader advised the CRC controller that he would conduct the approach without radar guidance and was told that the Learjet "is a declared probable renegade, you can expect three POB, two pilots, and one probable hijacker."

The formation leader approached the Learjet from astern with the second aircraft following approximately 2nm behind and about 1000 feet below. The Learjet was cruising at just over 250 KIAS. A descriptive report based on close inspection of the target was made. The Learjet crew were advised that an "obey-check" would be performed on the left side and that "after three minutes you should obey". The lead Eurofighter pilot stated that he had then flown to a position "slightly higher and to the left in front of the Learjet" and FDR data showed the wings had been rocked several times, before he reported to his CRC controller that the aircraft was "not following left-hand turn". Concurrently, the Learjet crew reported to their controller that they had "received a first wing-rock" and were waiting three minutes before obeying.

At the three minute point, wing rocking was again used by the lead Eurofighter at a position slightly above and in front of the Learjet, whose crew were advised by their controller "for your information, you overwhelmed the hijacker and now you will obey the orders of the QRA and call them on the guard". This radio communication was completed just as the lead Eurofighter, having rocked its wings, had commenced a left-hand turn. After two seconds, FDR data showed its bank angle had reached approximately 20° and after a further two seconds had increased to approximately 27° after which it remained stable and in a constant-rate turn.

It was subsequently calculated that the distance between the two aircraft at the beginning of the turn had been only 30 metres, that the Copilot would have rapidly lost sight of the Eurofighter and that the Captain would have had a slightly better view initially but then lost it. It was not clear at what point transfer of control of the Learjet had actually occurred but it was concluded that the significant increase in bank angle had been inappropriate and the direct cause of the collision. The Learjet went out of control after sustaining substantial impact damage and the effects of a fire which began as a result of it and was destroyed by the terrain impact which followed. Twenty seconds after the collision, the Eurofighter pilot transmitted a MAYDAY call advising that a collision had "probably occurred". The second Eurofighter, which had been too far in trail to observe the collision in any detail, confirmed "severe" impact damage to the leader aircraft and consequential right engine malfunction, and then escorted it back to Nörvenich where a successful single engine landing was accomplished. 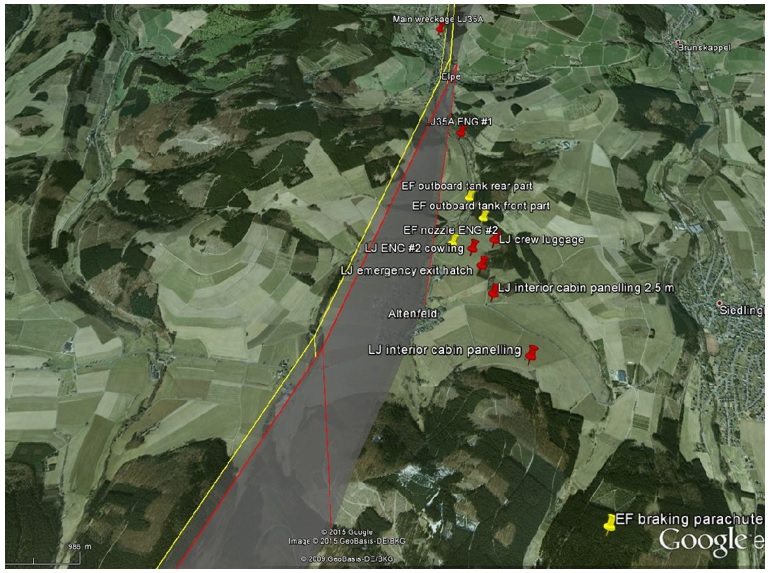 Having determined the detailed circumstances relating to the collision, the Investigation focused on the organisational context in which it had occurred.

It was found that the applicable German Air Force Flight Operations Manual "did not contain a description of the Renegade procedure". The procedure for interception missions was found to state that "civil aircraft, deployed on behalf of the Ministry of Defence, should be treated as military aircraft" without also applying the Air Force regulations on separation to such aircraft. These specified "a minimum distance of 1,000 ft slant range during air combat" which could be reduced to 500 feet subject to visual contact. The reduced range could only be further reduced "if the pilots involved have agreed on and determined a minimum distance" which did not occur prior to the commencement of this mission. The requirement in ICAO Annex 2 Appendix 2 for States to publish a standard method by which civil aircraft will be intercepted if this is deemed necessary was noted as was the additional guidance provided in Attachment 'A' to the same Annex and the more comprehensive guidance contained in the [ICAO 'Manual concerning the interception of civil aircraft' Doc 9433.

It was found that the civil operator of the Learjet also undertook transport flights using a number of Learjet variants and held an AOC for such purposes. It had introduced procedures detailing hazard and risk evaluation in 2012 and its Operations Manual included a section on formation flying. However, it was specifically observed that unlike the detailed Air Force procedures in case of loss of visual contact with a leader aircraft in close formation, this Manual contained no guidance on this eventuality - or its avoidance - at all. It was also noted that flights without passengers such as the accident one did not take place under the provisions of the AOC since they constituted 'Aerial Work' which "did not require permission by an aviation authority because up until 21 April 2017 the European regulations regarding Specialised Operations do not have to be applied in Germany". The LBA Flight Operations inspector responsible for the operator since December 2010 stated that he had "never conducted an inspection flight" on an AOC flight or otherwise, during that time. The LBA had also approved the Operator's "SMS Handbook" but the Investigation concluded that since a proper hazard and risk assessment for all types of flight operation had not been conducted, the SMS could only be seen as incomplete. It was noted in this respect that "no documentation was found showing that the LBA had specifically supervised the implementation of the operator's safety management system".

In terms of the common interest of the civil and military aviation authorities in the safe conduct of exercises involving aircraft from both of their oversight responsibilities, it was found that there had been a complete absence of information exchange "regarding the specialities and flight safety aspects of aerial target demonstrations". In respect of the wider subject of operational safety, the Investigation noted that at the time of the investigated accident Germany had not prepared a State Safety Programme (SSP) and was of the opinion that Germany "shows deficits in all five areas mentioned in the ICAO Safety Management Manual regarding the State Safety Programme."

The Investigation also considered that the Learjet CVR recording "showed deficiencies in regard to the application of crew resource management principles ... noticeable in cooperation, communication, leadership behaviour, situational awareness and the decision making process".

The Investigation formally documented the Causes of the collision as follows:

The Final Report was completed on 13 August 2015 and subsequently published.