On 27 May 2017, a Let 410 attempting to complete a visual approach to Lukla in rapidly deteriorating visibility descended below threshold altitude and impacted terrain close to the runway after stalling when attempting to climb in landing configuration. The aircraft was destroyed by the impact and two of the three occupants fatally injured. The Investigation concluded that the Captain had lost situational awareness at a critical time and had been slow to respond to the First Officer’s alert that the aircraft was too low. Safety Recommendations included the establishment of an independent and permanent Air Accident Investigation Agency.

On 27 May 2017, a Let 410 UVP E-20 (9N-AKY) being operated by Goma Air on a VFR cargo charter flight from Kathmandu to Lukla as flight 409 impacted terrain close to the 527 metre-long and up-sloping runway 06 at destination during rapidly deteriorating daylight visibility after attempting to climb in landing configuration following a premature descent below runway threshold elevation. The aircraft was destroyed by the impact and both pilots were fatally injured. The third occupant, described as “cabin crew” sustained serious injuries. 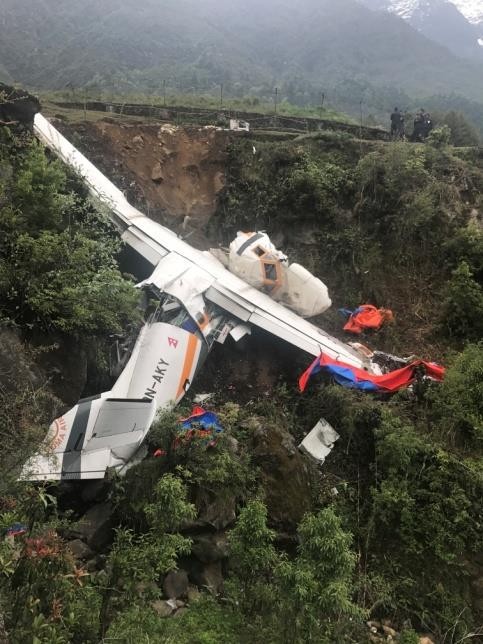 The wreckage of the aircraft. [Reproduced from the Official Report]

An Accident Investigation Commission to examine and report on the circumstances of the accident was established in accordance with the Civil Aviation (Accident Investigation) Regulation (2016) of Nepal on the day after the accident occurred. The aircraft was fitted with a 25 hour FDR and a 2 hour CVR and both were recovered from the wreckage and their data successfully downloaded.

It was established that the accident flight was the fifth in a pre-planned sequence of five cargo flights from Kathmandu to the STOL VFR-only airport at Lukla operated by the same aircraft and crew that morning, each sector taking around 35 minutes and operated under VFR. Shortly after the accident flight had departed from Kathmandu, the crew were advised that Lukla “was having heavy rain and the airport was closed”. However, since by this time Kathmandu was becoming congested with traffic holding both in the air and on the ground, it was decided to continue towards Lukla and a few minutes later, they were advised that the rain had stopped and the airport had reopened. An Airbus AS350 helicopter which had just left Lukla for Kathmandu had reported to Lukla TWR (which provides FIS only) that the weather conditions beyond the Lukla valley were good but those in the valley might make it difficult for a fixed wing aircraft to enter and this aircraft subsequently communicated directly with the accident aircraft. Lukla TWR subsequently communicated all available weather information when the inbound aircraft crew established contact 26 minutes after takeoff from Kathmandu, at which time VFR conditions prevailed. Then, two minutes later, the weather began to deteriorate quickly but, contrary to airport procedures, the runway was not closed and pilots including those in the accident aircraft “ventured to continue even though the weather was marginal” whilst TWR continued to provide weather updates.

Six minutes after checking in with TWR, the crew reported to TWR that they were entering the valley (at an altitude subsequently found to have been 9,200 feet rather than the normal 10,500 feet). They advised that they would decide whether to continue to a landing when nearer. One minute after that, and with just over a minute to go to impact, the aircraft was 200 feet above runway elevation when CVR data showed that both pilots had simultaneously sighted the runway from the west. Descent was continued to approximately 100 feet above the threshold elevation and this altitude was maintained for about 20 seconds during which time the TWR FISO advised that the surface wind was westerly at 4 knots and runway was clear. The Captain responded apparently “still in doubt” and asked if it was raining, and on receipt of the reply that it was not, the aircraft restarted its descent and deviated to the right. At this point, it was concluded that the Captain had been following the GPS map and no longer had the runway in sight and that he had “lost situational awareness” whereas the First Officer had not lost sight of it. When the aircraft was descending through 8,650 feet (already 250 feet below the runway threshold elevation), the CVR record showed that the First Officer had warned the Captain that they were too low but this call was not followed by any immediate corrective action and the descent continued for a further 150 feet after which the First Officer again warned the Captain “in panic” and this time elicited a similar “in panic” response from the Captain asking where the runway was. The First Officer gave directions towards the runway and a climb in landing configuration was begun although without the immediate application of maximum thrust. Two short stall warning annunciations occurred and then a continuous stall warning began and lasted for 13 seconds until impact. The prescribed response to this was not forthcoming and by this point may anyway not necessarily have facilitated a successful recovery. It was estimated that the aircraft had fully stalled when it was just 40 metres short of the runway threshold. The last words on the CVR were “do not pull too much”. The data from the final moments indicated that excessive drag led to the aircraft stalling. Its left wing then hit a small tree branch some 55 metres short of the runway threshold and the whole aircraft then hit sloping terrain just 30 metres short of the runway and 30 feet below it. The impact and the subsequent slide 70 feet down the slope collectively destroyed the aircraft but there was no post crash fire.

No evidence was found of airworthiness or loading issues which might have been relevant to the loss of situational awareness or the ability to recover from the resulting premature and off-track descent. It was evident that the flight crew had failed to comply with their VFR flight plan or the VFR only restriction on Lukla operations and that the aircraft had “repeatedly entered into cloud”. It was also noted that with a fuel endurance of 2 hours on departure from Kathmandu, the flight could have returned there from Lukla or reached either of the alternates specified in the Flight Plan - Ramechhap and Phaplu.

It was noted that a CCTV camera was installed at Lukla TWR for the specific purpose of providing a visual record of the cloud cover and visibility along the runway 06 final approach to those not at Lukla and that its images were not visible to those in the TWR, only to remote users with authorised access. However, the sequence of recorded images from this camera was available to the Investigation and they confirmed local reports of a sudden deterioration in visibility as low cloud began to move across the runway 06 final approach from the south east. It was considered that this deterioration may well have led to increased workload with necessarily increased attention being given to flight deck instruments triggering loss of situational awareness at a critical time.

In respect of the STOL runway at Lukla and its restricted VFR only use, it was noted that all landings must be made uphill in the 06 direction and all takeoffs in the downhill 24 direction because of steeply rising terrain to the southwest of the 24 threshold. This also means that a go around cannot be flown once committed to a final approach to runway 06. The Lukla TWR has a console equipped with QNH and air temperature readouts but as neither is calibrated, they are not used. The console does have an indication derived from the surface wind sock at the runway midpoint but not from the one at the 06 threshold. It was noted that the Nepal CAA had developed a “generic SOP” for fixed wing aircraft operations which included guidance to FISOs on determination of both the required visibility and minimum cloudbase and that this also “authorises a duty ATS Officer to declare the airport closed” if any of the following occur:

However this had not happened at the time of the accident. It was noted that runway 06 also had a Visual Augmented Guidance System (VAGS) and an A-PAPI installed as landing aids but neither was in use because of “calibration issues”.

Operational Safety at the Aircraft Operator

It was found that response to the crash was hampered by a lack of cutting instruments. The small Fire Tender available at the airport did not carry basic access equipment and available trained manpower was inadequate. In respect of the aircraft ELT, it was noted that it had activated but as the antenna had been damaged, it was not transmitting.

The Probable Cause of the accident was determined as “aircraft stall as a result of excessive drag created by sudden increase in angle of attack of the aircraft supplemented by low speed (below Vref) in an attempt to initiate immediate climb on a landing configuration (full flap and landing gear down) warranted by the critical situation of the final phase of flight”.

A total of 20 Safety Recommendations were made as a result of the Investigation as follows:

The Final Report was finalised on 11 April 2018 and subsequently published but did not include the Appendix referred to at various points in the text of the Report.