On 10 June 2013, a Merpati Nusantara Xian MA60 flown by a First Officer undergoing supervised line training made an unstable visual approach at destination which culminated in a sudden further increase in the rate of descent. The aircraft initially touched down on the runway with a vertical acceleration of 6g and then, after a bounce of -3g, stopped in 200 metres. The impact resulted in the wing box separating from the fuselage. The Investigation found that the Power Levers had been unintentionally moved into the ground range shortly before touchdown without either pilot being aware.

On 10 June 2013, a XIAN Xian MA60 (PK-MZO) being operated by Indonesian carrier Merpati Nusantara on a scheduled domestic passenger flight from Bajawa to Kupang/El Tari as MZ 6517 made a slightly steeper than usual visual final approach to the landing runway at destination and, after a sudden further increase in the rate of descent just before touchdown, hit the runway so hard that after it stopped, the wing box could be seen to have separated from the fuselage. Five of the 50 occupants, including one of the pilots, were seriously injured. 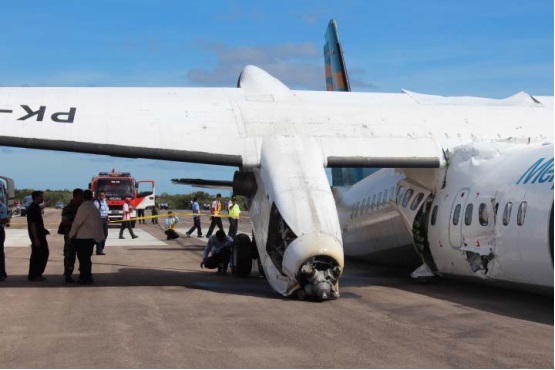 An Investigation was carried out by the Indonesian KNKT (NTSC). The aircraft SSFDR and SSCVR were successfully downloaded and analysis of this data allowed the Investigation to confirm that "there were no issues with the aircraft and (that) all systems were operating normally." The focus then turned to the pilots and their control of the aircraft.

It was established that the accident flight was a line training detail for the First Officer, a 25-year old Malaysian who had just over 300 hours total flying time including 117 hours of line training on the MA60 and who was expected to be released for unsupervised flying the following day. His extended line training had been preceded by 24 hours of line observation. The aircraft commander was a 42 year old Indonesian with 12,500 hours experience including 2000 hours on type who had become qualified as a Line Training Captain on the MA60 and had 218 hours of his flying experience logged in that capacity.

The crew had reported being in Visual Meteorological Conditions (VMC) when passing 10,500 feet in the descent. It was established that the approach, with the First Officer acting as PF had been to a visual left base for runway 07 with landing clearance issued with the aircraft in sight in that position. The surface wind was passed as 120°/14 knots. Recorded flight data showed that although the aircraft then turned onto final approach at approximately 1000 feet aal and on a normal descent profile, it briefly stopped descending before resuming a steeper corrective descent thereafter This had resulted in rates of descent which had exceeded 1000 fpm and at one point had reached 1300 fpm. The AP was not disconnected until the aircraft was less than 2nm from the runway. It was apparent from FDR data that "the left power lever was in the range of BETA MODE while the aircraft altitude was approximately 112 ft….followed by the right power lever at 90 ft" and both remained there until the very hard runway contact (a vertical acceleration of +5.99 g) in an essentially wings-level attitude followed by a substantial bounce (-2.76 g). The initial runway contact occurred at 58 metres beyond the runway threshold and the aircraft came to a complete stop 200 metres further on.

After the aircraft stopped, the two flight attendants assessed the situation and decided to evacuate the passengers through the rear left door. The four of the total 42 passengers who sustained serious injuries were seated in rows three, seven and eight. More detail on the nature of their injuries and the serious injury sustained by one of the pilots was not disclosed.

It was noted that in accordance with the Operator's Normal Checklist, the power lever electro magnetic stop had been selected to the 'open' position which had the effect of making it possible for the power levers to be moved below Flight Idle position in flight when it would not otherwise have been possible. This change in the Checklist meant that it was no longer the same as the equivalent Checklist in the aircraft manufacturer's FCOM. It was found that there was no evidence that the decision to make this change taken by the Operator's "Board of Instructors" had been accompanied by any safety assessment, risk analysis and/or regulatory approval. It was also observed that there was (by design) no visual or audio alert when the electro magnetic stop was selected OPEN.

It was also considered that the fact that the Minimum Equipment List (MEL) permitted the electro magnetic stop to be inoperative subject to it being in the 'OPEN' or unlocked position was contrary to the requirements of the Indonesia CASR in that the latter require that "(the) reversing system should be designed so that no single failure or reasonably likely combination of failures or (any) malfunction of the system will result in unwanted power lever movement (into the) BETA range and reverse under any expected operating condition" but that "failure of structural elements need not be considered if this kind of failure is extremely remote". Specifically it was considered that the extant MEL item "does not meet the CASR requirement that this condition should be extremely remote, unless otherwise the additional operation procedure and limitation is applied."

In respect of the First Officer's movement of the power levers into the ground/beta range in flight when such action was explicitly prohibited, it was found that he had previously been observed to delay moving the power levers to Ground Idle during landing. It was considered that on the accident flight, aware of this, he had unintentionally lifted the mechanical power lever stop baulks and retarded the power levers prematurely.

The Investigation concluded that the following Contributing Factors had led to the accident:

The Investigation noted that similar issues in respect of both the FDR and the aircraft operating manuals to those identified in a previously-investigated MA60 accident which had occurred in Indonesia had been found and that in the case of the former, a re-issue of the previous recommendation would therefore be made (see below) and that in the case of the latter, the NTSC was in receipt of a relevant communication from the Xi'an Aircraft Corporation but that the matters raised had not yet been satisfactorily resolved.

Seven Safety Recommendations were issued at the conclusion of the Investigation as follows: