On 22 November 1994 a McDonnell Douglas MD 82 flight crew taking off from Lambert- St. Louis at night in excellent visibility suddenly became aware of a stationary Cessna 441 on the runway ahead and was unable to avoid a high speed collision. The collision destroyed the Cessna but allowed the MD82 to be brought to a controlled stop without occupant injury. The Investigation found that the Cessna 441 pilot had mistakenly believed his departure would be from the runway he had recently landed on and had entered that runway without clearance whilst still on GND frequency.

On 22 November 1994 a McDonnell Douglas MD 82 (N954U) being operated by Trans World Airlines and taking off on a scheduled passenger flight from Lambert-St. Louis to Denver CO as TWA 427 in normal night visibility collided with a Cessna 441 (N441KM) being operated by Superior Aviation on a non-revenue positioning flight from Lambert-St. Louis to Iron Mountain. The Cessna was stationary ahead of the MD 82 on the same runway. The Cessna was destroyed and its two occupants were killed. The MD82 sustained substantial damage but remained under control and was brought to a stop and an emergency evacuation of its 140 occupants was carried out. Neither aircraft caught fire.

An Investigation was carried out by the NTSB. The FDR and CVR from the MD82 were recovered and successfully replayed. The Cessna did not have, nor was it required to have, either a CVR or an FDR.

The Investigation was able to establish that the Cessna had landed on runway 30R at St Louis on a revenue air taxi flight about 15 minutes prior to the accident, clearing to the right to taxi to the 'Midcoast' GA Terminal. Once ready for the non-revenue flight back to his operating base, the Pilot had contacted GND and been cleared to "back taxi into position hold runway 31, let me know on this frequency when you're ready for departure". The readback of this clearance was incomplete and did not include any reference to runway 31 but it was not challenged by the controller. The Investigation noted that "although not formally defined, a clearance to “back-taxi” on an active runway generally means to use that runway to taxi in a direction opposite that of departing or landing traffic to reach the take-off position”. In this case, the intention of the GND controller (who was responsible for the 1,900 metre-long, 22.5 metre wide Runway 31 because it was not active) was for the Cessna to taxi for departure from runway 31. Using taxiway 'W' to leave the Midcoast Apron would have required a left turn onto this runway from taxiway 'W' in the opposite direction to the displaced landing threshold arrows until the end of the runway was reached, at which point a 180° would have been necessary to line up and hold ready for take-off. It was noted that Runway 31 was not - and never had been - approved for landing use, so that the displaced landing threshold markings might be considered misleading for a departing aircraft aware of that restriction despite the fact that backtracking the runway would have served to alert the Pilot to the fact that he was on a runway, since the white direction of the runway lights would have been seen. The area in which the taxi confusion arose is shown in the illustration below. 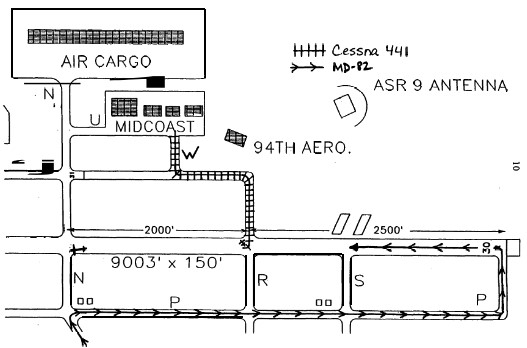 The ground tracks of the two aircraft. To reach the full length threshold of runway 31, the Cessna would have needed to turn left when reaching the end of taxiway 'W' and then do a 180, not turn right as shown. [Reproduced from the Official Report]

About 3½ minutes after receiving his taxi clearance from GND, the Cessna Pilot advised GND that he was "ready to go on the right side". Contrary to clearance but obviously unaware of that fact, on reaching the departure end of runway 31, he had turned right onto taxiway 'R' right to reach and enter runway 30R. The GND controller had responded with "hold on position on runway 31 and monitor the Tower on 122.0" which was acknowledged without the Pilot repeating either the runway or the Tower frequency, again without challenge from the controller. The Investigation noted that the ATIS current at the time made no mention of runway 31 as potentially active and was told that since use of it was only "occasional", it was normal practice not to mention it on the ATIS broadcast.

Shortly before the Cessna entered and stopped on Runway 30R not visible to the GND or Runway controllers due to lack of area lighting, the latter had cleared the MD 82 which had taxied from the south side of the airport, to take off from the full length (2,745 metres) of the 45 metre-wide runway 30R. The aircraft was taxied onto the runway with the First Officer acting as PF and the take-off was commenced.

About 2 to 3 seconds after the Captain's "80 knot" callout, an "additional crew member" with no declared duties who was occupying the supernumerary crew seat in the MD-82 flight deck yelled "there's an airplane!”. The operating flight crew reported that they also saw the aircraft ahead at "almost the same instant". It was visible only as it was illuminated by the landing lights of their aircraft. Both pilots had responded by applying the brakes and the Captain by steering to the left in an attempt to avoid a collision.

Approximately 2 to 3 seconds after sighting the Cessna, the MD-82 flight crew reported "feeling an impact on the right side of their airplane (which) did not adversely affect their ability to maintain directional control" and they had continued with their rejected take-off and come to a stop on the left side of the runway near the taxiway 'N' intersection. The collision had occurred 760 metres from the start of 30R at its intersection with taxiway 'R'.

The Investigation subsequently found evidence which indicated that despite the Pilot's call to the GND controller, the Cessna had been positioned almost directly on the runway centreline with the MD-82 having veered slightly left of the centreline by impact. The right wing of the MD-82 had "struck the tail cone and fuselage structure of the Cessna 441, separating the horizontal and vertical stabilizers from the fuselage and shearing the top of the fuselage/cockpit from the airplane". The Cessna came to rest at the right side of the runway having been destroyed by impact forces, with the right engine still running. The full length of the upper fuselage was sheared off approximately 5 cm above the base of the cabin windows and the outboard part of the left wing was detached. The MD-82 sustained substantial but repairable damage to its right wing, landing gear, lower fuselage and right engine.

With no sign of fire, the MD-82 crew shut down the engines and advised ATC of the collision. They then delayed evacuation of the occupants whilst they assessed the safest method of evacuation. Eventually, with the ARFF having arrived and applied foam to both sides of the aircraft and to the fuel which had leaked from the damaged right wing, it was decided that just a single exit, door R1, would be used because the leaking fuel had drained under the aircraft and pooled on its left side. This evacuation was accomplished without further event.

The Investigation found that although both the GND and Runway Controllers described their workload at the time of the accident as "moderate", the GND controller was working four positions which covered both the north and south sides of the airport, clearance delivery and flight data.

It was noted that as per normal practice resulting from previous instances of misidentification by air carrier aircraft of runway 31 as runway 30R, its lighting was set at a lower intensity than that of runway 30R. At the time of the accident ASDE-3 had been installed at St Louis but was still undergoing acceptance trials ahead of commissioning and although it was occasionally used by controllers for familiarisation when available, it was not available on the night of the accident because "the computer hard drive had failed". It was noted that it had been commissioned whilst the Investigation was in progress.

In seeking to understand how the Cessna Pilot came to misinterpret his clearance, it was concluded that the evidence favoured a scenario in which the pilot "acted on an apparently preconceived idea that he would use his arrival runway, runway 30R, for departure" rather than a scenario based on him having become lost. It was noted that because of the displaced threshold marking scheme, he would not have seen the identifying numbers for runway 31 and that had he done so, he "might have been cued to question the controller as to the controller’s intentions". The Investigation acknowledged that the runway marking and lighting in place on runway 31 were in accordance with requirements and did not consider them to be a factor in the accident "except to the extent that they may not have provided the pilot with sufficient cues to cause him to be more attentive to the controller’s clearance". However, it was also noted that he had entered runway 30R at an intersection when he had not requested one and the ground controller had not indicated that he should expect one and that he "should not have entered the runway at an intersection without specific clearance to do so". It was considered that whilst doing so "should have been a final cue that his notion of being cleared to runway 30R was incorrect, this cue was apparently not enough to cause him to question his perception that he had been cleared to runway 30R".

In respect of the failure of the MD 82 pilots to detect the presence of the Cessna until it was illuminated by their aircraft's landing lights, the Investigation considered that "with the wing tip-mounted anti collision/strobe lights turned off", which it concluded that they had been, "the white tail cone-mounted navigation light would have been the only light visible [and] would have blended in with the runway centreline lighting system". The response of the FAA to Safety Recommendations that all aircraft on active runways should be required to have their anti-collision/strobe lights visible from the rear selected on made after the investigation of a 1991 accident at Los Angeles - in which an aircraft did not detect another aircraft stationary at an intersection part way along the runway it was landing on - was noted as having been classified as "unacceptable".

Finally, whilst investigating the accident it was found that the Airport Authority failed to officially close the airport after the collision. As a result, it was considered that "evacuated passengers were put in danger of being injured by taxiing aircraft" and that "closing the airport would allow controllers and/or airport authority personnel to assess the situation and to redirect both airborne and surface traffic to areas remote from the accident site" until safe conditions could be confirmed. As a result of this "unsafe situation", a Safety Recommendation was issued prior to finalisation of the Investigation Report on 17 July 1995 as follows:

It was determined that the Probable Cause of the Accident was "the Cessna 441 pilot’s mistaken belief that his assigned departure runway was runway 30R, which resulted in his undetected entrance onto runway 30R, which was being used by the MD-82 for its departure".

A Contributory Factor was identified as "the lack of ATIS and other ATC information regarding the occasional use of runway 31 for departure".

It was noted that "the utilization of an operational ASDE-3, and particularly ASDE-3 enhanced with AMASS, could have prevented this accident".

At the conclusion of the Investigation, twelve Safety Recommendations were made as follows:

The Final Report of the Investigation was adopted by the Board on 30 August 1995 and subsequently published.