On 30 January 2013, the crew of a Boeing MD82 successfully rejected its take off at Copenhagen after sudden explosive failure of the left hand JT8D engine occurred during the final stage of setting take off thrust. Full directional control of the aircraft was retained and the failure was contained, but considerable engine debris was deposited on the runway. The subsequent Investigation concluded that a massive failure within the low pressure turbine had been initiated by the fatigue failure of one blade, the reason for which could not be established.

On 30 January 2013, the crew of a Boeing MD82 (SE-DIK) being operated by SAS on a scheduled passenger flight from Copenhagen to Dublin rejected a daylight take off in normal ground visibility when a loud "bang" was heard and the aircraft began veering to the left and the take off was rejected. Since there appeared to be no smoke or fire, the runway was vacated to await confirmation of that from the Airport Fire Service, which was received. Passengers were disembarked to buses. Although there was no damage to the aircraft other than to the failed left engine, an inspection of the runway found a large quantity of engine debris.

An Investigation was carried out by the Aviation Unit of the Danish Accident Investigation Board (AIB). It was immediately established that severe internal damage had resulted in the failure of the left hand Pratt and Whitney JT8D-217C engine. Recorded data was successfully downloaded from the removed DFDR and Cockpit Voice Recorder (CVR) and used to assist in the Investigation.

It was found that action to reject the take off had been initiated at 76 KIAS. It was determined at an early stage that the flight crew response had been appropriate and it therefore "decided not to investigate the operational aspect any further".

The failed engine was removed from the aircraft and sent to an overhaul facility for tear down in order to facilitate investigation. Visual examination of the engine revealed that all 88 third stage low pressure turbine (LPT) blades had fractured at or near the airfoil root above the flow path platform. The remains of one of these - blade number one - showed clear evidence of heat and fatigue in the fractured area (see the first diagram below). There was no evidence of failure origin on the 87 other third stage blades. All the blades on the fourth stage LPT were also found to have been similarly fractured at or near the blade airfoil root (see the second diagram below). It was noted that none of the remaining parts of the fourth stage blades showed any evidence of fatigue. Overall, no evidence of LPT or exhaust case breaches or any signs of case flange breaches was found and all observations confirmed that the failure sequence had been fully contained within the engine case.

Further attention was particularly given to the attached remains of the third stage number 1 blade which, along with the adjacent blades 2 and 88, was removed from the disk. Clear evidence of fatigue was observed on the number 1 blade with the fracture surface showing various degrees of oxidation and beach marks visible. The origin of the fatigue cracking was obvious with the fatigue part of the fracture being relatively smooth and the secondary fracture rough and serrated.

Scanning Electron Microscopy was used to further examine the origin and propagation of the crack with adjacent blade 88 used as a reference. The engine manufacturer provided explanations for various detailed markings on the blades and it was established that all of the third stage LPT blades had been installed as overhauled (OH) in January 2006. Since then, the cycles had reached almost the half way point to the next likely overhaul at 20,000 cycles - although it was stated that this figure was dependent on service experiences and any overhaul shop recommendation. It was noted that lower inspection thresholds apply to OH blades than to new blades. 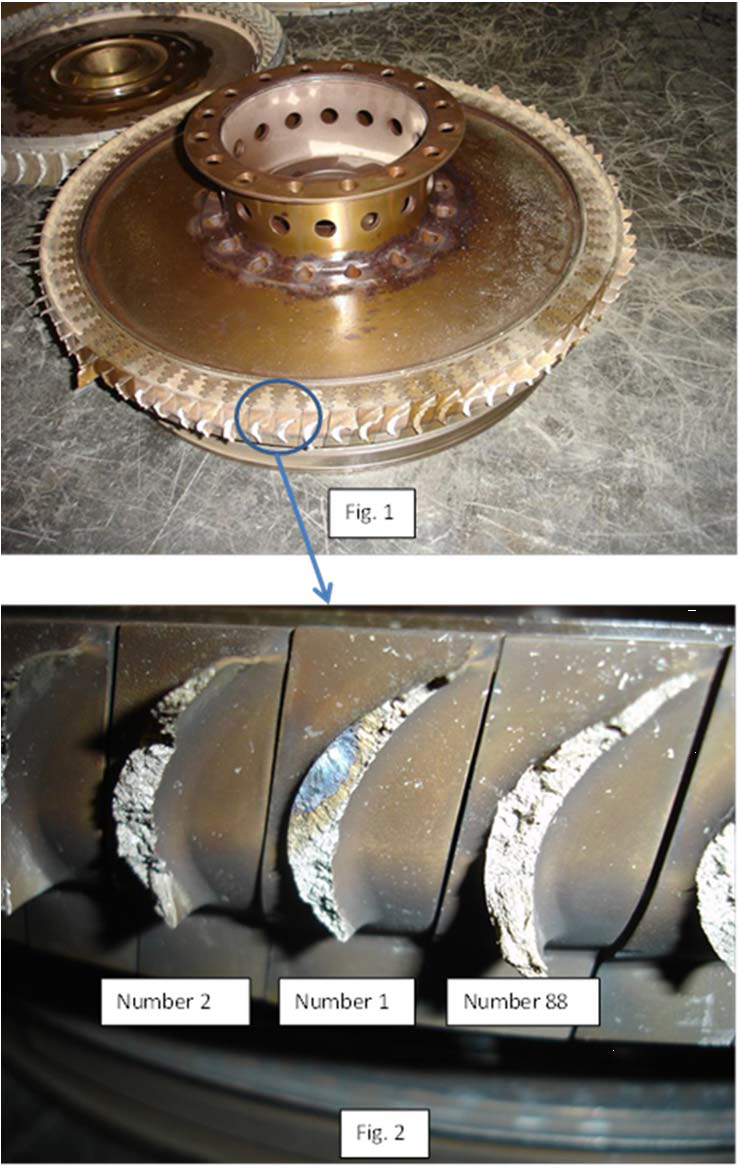 The third stage LPT disk with a close up view of the fractured area of blade no.1. Reproduced from the Official Report. 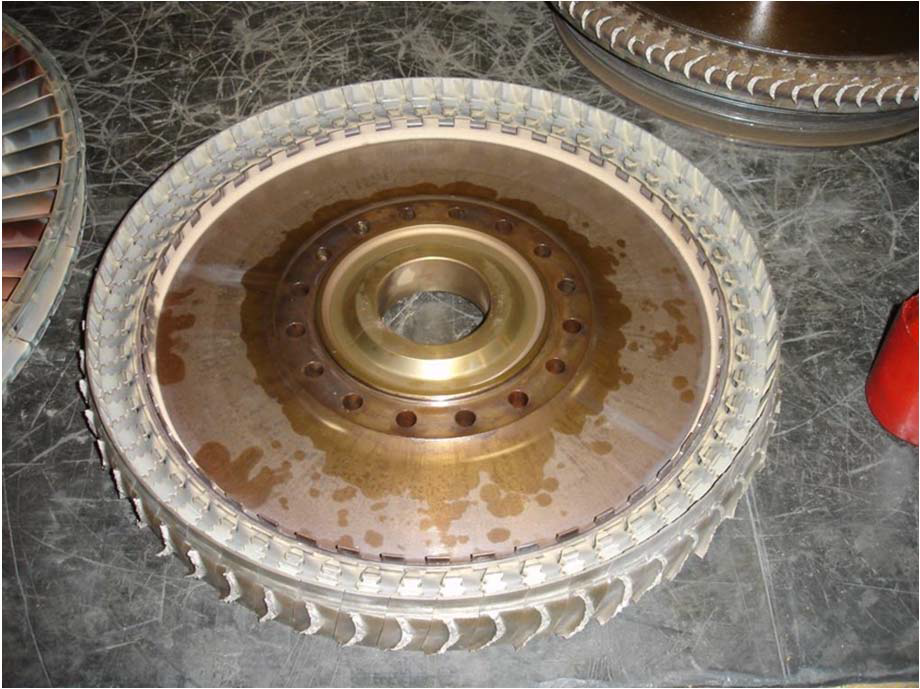 The fourth stage LPT disk. Reproduced from the Official Report.

It was noted that "the primary cause of fractured LPT blades was shroud wear" and the following background information was documented:

The existence of a 2011 FAA AD for initial and repetitive torque inspections of third and fourth stage LPT blades for shroud notch wear on some variants of the JT8D engine was noted but this had only applied to fourth stage blades in the case of the -217C variant. The Investigation was unable to confirm or eliminate shroud notch wear on the evidence available. The failed engine was confirmed to have been in compliance with all other applicable ADs.

The engine manufacturer advised that "a number of JT8D engine LPT blades fractures had led to in-flight engine shutdowns, with ten third stage fractures recorded between May 2008 and June 2013, at which point it was believed that just over 1600 JT8D-217C/219 engines were on wing". It was noted that -217C and -219 LPT third stage blade fractures were not distinguished from one another because of the close similarity of the two engine variants and their common third stage blade part numbers.

The Conclusion of the Investigation was that whilst the origin of the failure sequence was a fracture in the no. 1 blade of the third stage LPT attributable to fatigue, neither defects nor structural abnormalities explained the initiation of the fatigue crack and the root cause of the fatigue could not be exactly determined.

The Final Report was published on 12 May 2015. No Safety Recommendations were made but the Investigation Report stated that "the AIB encourages the Type Certification Holder of the involved engine type (PW JT8D-217C) to evaluate the case for mandating shroud notch wear inspections on stage 3 LPT blades" noting that such inspections are currently only mandatory for fourth stage LPT blades.