On 4 June 2002, the crew of an MD82 in the cruise at FL330 with AP and A/T engaged failed to notice progressive loss of airspeed and concurrent increase in pitch attitude as both engines rolled back to thrust levels which could not sustain level flight. The aircraft stalled and a recovery was accomplished with significant altitude necessary before engine thrust was restored and a diversion made. The Investigation attributed the engine rollback to ice crystal icing obstructing the engine inlet pressure sensors following crew failure to use the engine anti-icing as prescribed. Two Safety Recommendations were made.

On 4 June 2002, a McDonnell Douglas MD82 (N823NK) was being operated by Spirit Airlines on a scheduled domestic passenger flight from Denver to Fort Lauderdale as NK970. In the cruise at FL330 in day IMC the aircraft stalled after a sudden loss of thrust from both engines. Recovery and restoration of normal thrust was only achieved after a significant loss of altitude and a diversion to Wichita was then made involving an overweight landing. None of the 111 occupants were injured and the aircraft was not damaged.

An Investigation was carried out by the NTSB. DFDR data was successfully downloaded but the CVR CB had not been tripped so no useful data was available and it was not downloaded.

The Captain had 7,700 total flying experience including 1,720 hours on type, 1,420 of the latter having been in command. He was found to have joined the airline just over 4 years earlier as a First Officer and subsequently gained a command and stated that he was an ALPA-trained 'safety investigator' and the 'local Air Safety Chairman' at the airline's Ft Lauderdale base. The First Officer had 8,900 hours total flying experience including 376 hours on type and was acting as PF for the sector.

It was found that the flight had climbed initially to FL300 and then to FL330, reaching this cruise level about 14 minutes after take off. Both AP and A/T had been engaged shortly after take off and for over 15 minutes at the final cruise level and the flight was proceeding normally. Thereafter, over a period of about five minutes, a series of abnormal indications all went unnoticed by both pilots:

Attitude and airspeed changes were noted as having been a direct consequence of the AP attempting to maintain level flight with decreasing engine thrust.

At the end of this period, airspeed had reached 209 knots. Then, over the next 10 seconds:

The Captain had taken control, disconnected the A/T and AP and found that there was no response to an increased thrust lever position. DFDR data showed that during the 18 seconds after the engines lost power, airspeed fell to 193 knots and pitch attitude continued to increase to almost 9º nose up before "the aircraft pitched down and began to descend". Recovery from the aerodynamic stall was achieved but without much thrust available, the descent continued for more than 16,000 feet before normal engine thrust was again available. During this time, the right engine was shut down due to a high EGT indication but successfully restarted on the second attempt - at about 17,000 feet - and the left one was reported to have "started on its own a short time later". The First Officer reported having been unsure at the time whether the vibration he had been aware of when the thrust problem was first recognised by the crew had been "a stall or a pre stall buffet".

The Investigation found no faults with the aircraft engines or systems which would have contributed to the event but a review of the prevailing meteorological conditions indicated that the aircraft had been flying in conditions conducive to ice crystal icing prior to the uncommanded loss of thrust. It did, however, find that the crew had not selected the engine anti icing system - which included anti icing of the engine inlet pressure probe and necessary to determine EPR - which was considered to have been contrary to the applicable FCOM procedures. These stated that this system "must be ON when icing conditions exist or are anticipated...” and that “(inflight) icing conditions exist when RAT is 6°C or below AND visible moisture in any form is present (such as clouds, fog with visibility one mile or less, rain, snow, sleet and ice crystals)”.

The available meteorological evidence indicated that although the crew reported having been largely clear of cloud once in the cruise in an area with "just a few scattered cirrus clouds", a specialist aftercast carried out for the Investigation showed that there had been considerable convective weather in the area being transited (see the illustration below). About 7 minutes prior to the incident, ground-based weather radar returns indicated that the cloud tops were "30,000 feet at the incident location and 35,000 feet about 10 nautical miles west". Returns at 33,000 feet at the incident location about 8 minutes prior to the event were such as to indicate light rain or its equivalent, although ice crystals were not necessarily detectable. 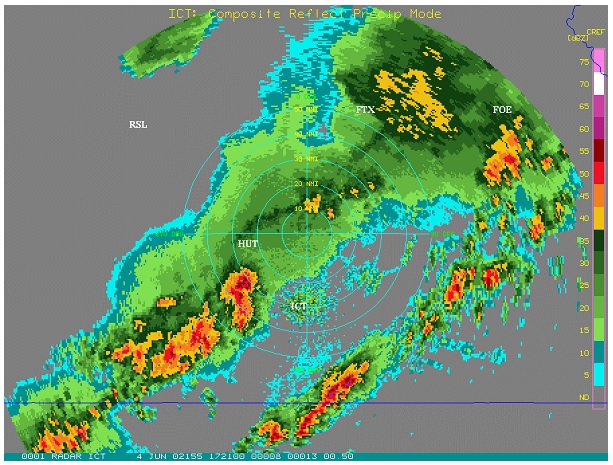 A weather radar image timed approximately 10 minutes prior to the event with its location at the centre of the superimposed polar grid - showing very strong returns in the vicinity. [Reproduced from the Meteorological Specialist's Report in the Accident Docket]

The Investigation noted that ice accretion resulting from an encounter with high altitude ice crystals "does not appear in places that pilots would typically look for ice accretion (such as the windshield wipers, windshield wiper attachment bolt, wings, etc.)". So in the case of aircraft which use EPR to provide a primary indication of engine thrust and do not have an ice accretion sensor associated with the engine inlet pressure probe, it may sometimes be only the symptoms of probe ice accretion that alert crew to the problem.

The Conclusion of the Investigation was that because the engine anti-ice system was not activated when flight 970 entered the icing conditions, the ice crystals were able to adhere to and partially block the engine inlet air pressure probes, causing the EPR indication to increase until reaching the autothrottle EPR limit. Meanwhile, engine power and airspeed were actually decreasing and the airplane was pitching up, resulting in a stall condition.

The Probable Cause of the investigated event was determined as:

"The flight crew's failure to verify the engine instrument indications and powerplant controls while on autopilot with the autothrottle engaged, and their failure to recognize the drop in airspeed which led to an aerodynamic stall associated with the reduction in engine power. Factors were the presence of ice crystals at altitude, and the icing of the engine inlet probes resulting in a false engine pressure ratio indication."

Two Safety Recommendations were issued during the Investigation:

The Final Report of the Investigation was adopted by the NTSB on 28 January 2005. The letter communicating the two Safety Recommendations to the FAA was dated 29 April 2004. This letter includes a summary of the background and analysis which led to them.