On 16 January 2018, a McDonnell Douglas MD-82 attempting to land at Tarbes was subject to gross mishandling by the crew and the approach became unstable. A subsequent low level go-around attempt was then made without setting sufficient thrust which resulted in sustained and close proximity to terrain at an airspeed close to stall entry before the required thrust was eventually applied. The Investigation was hindered by non-reporting of the event but was able to conclude that multiple pilot errors in a context of poor crew coordination during the approach had caused confusion when the go around was initiated.

On 16 January 2018, a McDonnell Douglas MD-82 (LZ-LDM) being operated by Bulgarian Air Charter on a non-scheduled international passenger flight from Catania to Tarbes as BUC8115 became unstable below 500 feet in day VMC but descent was continued until just above the runway elevation before a go around was commenced. However, although the aircraft was rotated, the corresponding climb did not commence for a further mile during which the airspeed almost reached that at which a stall would have occurred. In the event, control was regained just in time and a diversion to Toulouse followed without further event.

After notification of the event to the French BEA by the Tarbes ATC, it was classified as a Serious Incident and then agreed that the required Investigation would be carried out by the Bulgarian Air Accident Investigation Unit (AAIU). Relevant data from the FDR was successfully downloaded but due to the failure of the flight crew involved to report the event, relevant data from the CVR was overwritten. It was noted that ground observers of the event at Tarbes had been “terrified by the approach and the things which happened expecting the plane to crash at any moment”.

It was established that most of the flight had proceeded normally, with the First Officer as PF. Shortly before descent from the final cruise altitude of FL330 which had provided smooth flying conditions, some avoidance of convective weather in the Barcelona region had been necessary in icing conditions and moderate turbulence but at about FL100, these conditions had ceased when the aircraft had “exited the dense clouds”. Clearance to join the ILS ’Z’ procedure for runway 20 at Tarbes was given and on checking in with TWR, the flight reported fully established on the ILS. Having earlier been advised by ATC of a thunderstorm in the vicinity, with the lowest cloud as FEW at 1900 and visibility as 5km, TWR then advised that the surface wind was 210°/11 knots, that Cumulonimbus cloud was present and that the runway was wet. The Investigation noted that during the final approach and go around, a significant thunderstorm cell which had been tracking west to east had been to the north of the airport and was likely to have affected the flight conditions on final approach.

The approach had proceeded normally until the AP was disconnected at a recorded 844 feet agl with the runway in sight. Immediately after this, the aircraft “was exposed to strong wind gusts and heavy rain” and the First Officer failed to maintain accurate tracking of the ILS. A deviation left of the LLZ track and below the GS began to develop and the Captain took control and began corrective action, although he left the A/T engaged in SPEED mode set to 140 knots. Thereafter, the First Officer did not fully transition to his unanticipated PM role. The absence of any action by the Captain to increase engine thrust in support of the manually increased pitch meant that descent below the ILS GS continued and at 380 feet agl, the aircraft flight path took it beyond ILS FFD for both the LLZ and the GS.

Despite this, no go-around was commenced or called and at 96 feet agl, “the approach was (still) totally outside the standards and the required parameters for a stabilised approach”. Two seconds later, the Captain selected the A/T off whilst making no change to the (minimal but not minimum) thrust being maintained and four seconds after that, with the aircraft at 58 feet agl and with 480 metres still to go before reaching the runway threshold, he then increased the pitch from 4° to 11° without increasing the thrust. The aircraft levelled at approximately 40 feet agl and flew horizontally at that height for 10 seconds as the airspeed dropped from the 136 knot approach speed to 128 knots, during which the aircraft crossed the runway threshold to the right of the centreline.

The First Officer, who reported having been “extremely concerned about the situation” made a go around call and after about 5 seconds and when 350 metres past the threshold after a total 830 metres flown level at 40 feet agl, the Captain called and initiated one. He selected TO/GA and began following the FD pitch up command but did not remember that the A/T was off and did not increase thrust manually. The minimal engine thrust set resulted in the angle of attack approaching a critical (stall threshold) level. The First Officer did not recognise the absence of sufficient thrust for a climb but 7 seconds after the threshold had been crossed with 124 KCAS recorded, he responded to the Captain’s call to select the flaps from 40° directly to 11° and, three seconds later, to select the landing gear up as the aircraft passed 89 feet agl at 119 KCAS and thereafter also armed the GA altitude, selected the speed to 180 knots and disarmed the spoilers.

The airspeed continued to decrease and as the landing gear retraction was completed, the airspeed reached its minimum of 116 KCAS whilst the aircraft was at a 15° pitch up. Three seconds later, whilst disarming the spoilers, the First Officer noticed that the thrust levers were not at the go around position and immediately advised the Captain who responded by instructing him to correct this. The thrust was immediately increased from 1.3 EPR to 1.9 EPR and then further to a maximum of 2.04 (left) and 2.16 (right) after which the Captain “made some adjustments”. Three seconds after this thrust increase was commenced, the pitch of the aircraft and its angle of attack reached their maximum values of 38.6° and 19.8° respectively at 50 feet agl and 124 KCAS.

After a further 15 seconds, with the aircraft passing 343 feet agl and with airspeed now 142 KCAS, the thrust was reduced to the normal climb setting and the aircraft was observed to commence a left turn and “fly very close to a hill”. It was then radar vectored to turn north and after entering a hold to review matters then diverted to Toulouse. On arrival there, no report about the event was made by the Captain to the aircraft operator and the aircraft subsequently made an uneventful flight back to Tarbes and landed normally.

The aircraft had been flown level at around 40 feet agl without achieving a sustained climb for a further 850 metres once over the runway making a total of 1680 metres of flight conducted with close to critical angles of attack. 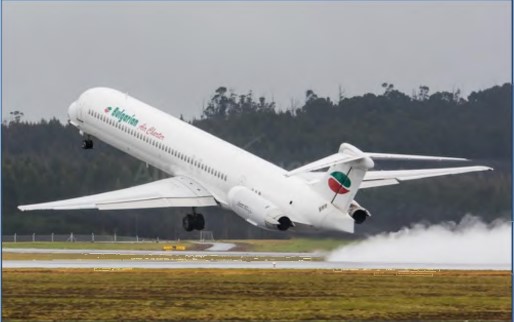 The aircraft over the runway prior to the setting of enough thrust to begin a go around. [Reproduced from the Official Report]

The Investigation noted that since the aircraft flight path during the event could be completely explained by the available FDR data, there was no reason to formally eliminate either aircraft airworthiness or airport navigation systems as potential contributors to the event. However, the aerodynamic characteristics and performance of the aircraft were examined in respect of two aspects with contrary consequences. It was concluded that the rear mounted engines had presented a “clean wing” which had contributed a “positive influence” insofar as the separation of the airflow over the wing and its control surfaces will be delayed relative to wings with pylon-mounted engines because of the cleaner surface circulation over it. On the other hand, the T-shaped tail of the aircraft had contributed “a negative influence” in that “to some extent, depending on the wing area and the tail panels of the aircraft, there is a marked shadowing on the tail panels and the pitch control surfaces in the wake of the wing at high angles of attack”. It was noted that such shadowing in flight is a very dangerous phenomenon known as a “deep stall” which “is characterised by two consecutive, energetic pitch-ups” with the second ultimately leading to a loss of aircraft pitch control. During both these pitch-ups, it was observed that the C of G of an aircraft moves and pitch decreases briefly but then resumes its rearward movement and longitudinal stability is lost.

Tests to study this phenomenon found that the first pitch-up to about 20° resulted in the airflow gradually spreading over almost all the wing and the aircraft remaining controllable, albeit using “extreme and vigorous rudder commands” to retain directional control but that the “second pitch-up was caused by a loss of efficiency of the horizontal stabiliser” about which the airflow was already highly disturbed and therefore pitch control was lost. The Investigation “assumed with sufficient probability” that the aircraft was in the first phase of this phenomenon, but the limit was not reached and retracting the flaps from 40° to 11° briefly reduced drag whilst at the same time reducing the pitch angle at a critical moment, which was “accompanied by an altitude change from 33 feet to 107 feet before the aircraft again began to lose height and descended back to 50 feet”. It was concluded that the recognition by the crew that go around thrust was not set had occurred at the last possible moment to allow recovery of the situation. It was also observed that “The flight did not end fatally because the thrust levers were left as they were when the A/T was switched off”, a low thrust setting but not idle.

The Cause of the event was determined to have been “mistakes made by both pilots in crew coordination and in flight path control during both the approach to land in adverse weather conditions and during the subsequent failure to follow the prescribed go-around procedures”.

The Final Report was released in early June 2020.