On 23 June 2006, an AMC Airlines MD83 significantly overran the landing runway at Juba after a late touchdown followed by unexpected and un-commanded asymmetry in ground spoiler deployment and thrust reverser control caused by an unappreciated loss at some point en-route of all fluid from one of the two hydraulic systems. The Investigation concluded that the abnormal hydraulic system status should have been detectable prior to attempting a landing but also that one of the consequences of hydraulic system design should be modified.

On 23 June 2006, a Boeing MD83 of Egyptian operator AMC Airlines under wet lease to Sudan Airways on a scheduled passenger flight from Nairobi to Juba overran the 2400 metre long landing runway at destination in normal day visibility. None of the 24 occupants were injured but the aircraft suffered significant damage to the nose and left main landing gear. Minor runway end ground lighting damage was caused by aircraft impact. ATC were not initially aware of the overrun as it was not visible from their position.

An Investigation was carried out by the Sudan CAA Air Accident Investigation Central Directorate. Flight Data Recorder (FDR) and Cockpit Voice Recorder (CVR) data was successfully downloaded to assist the Investigation - although it was found that some recordings for left and right systems were reversed. It was noted that type-experienced aircraft commander had been PF and that the First Officer had very low total and aircraft type experience. It was noted that a second pilot experienced on the aircraft type and holding the rank of Captain was ‘observing’ from the supernumerary crew seat in the fight deck but no comment was made as to his operational duties and/or role, if any.

After an uneventful non precision approach to runway 31 at Juba with the reported air temperature at 31° Celsius and the surface wind reported as 180° / 3 knots, the aircraft had touched down with 40° flap and minimum autobrake selected with a speed of 130 knots and at a position approximately 750 metres beyond the runway threshold. Auto deployment of ground spoilers had occurred and reverse thrust had been immediately selected. However, a few seconds after touch down, the left wing ground spoilers had suddenly returned to their stowed position and directional control was compromised as a result. The PF had managed to keep the aircraft on the runway whilst achieving deceleration to a ground speed of 48 knots, with the reversers having been stowed (but not locked) after 27 seconds deployment when at a ground speed of around 80 knots. However, from this minimum and with 300 metres of runway remaining, the speed had then begun to gradually increase and since the aircraft commander then considered that the aircraft might not come to a full stop without departing the runway, he had again selected reverse. Following this action, ground speed continued to slowly increase on the downsloping runway and the aircraft deviated slightly to the right before overrunning the end of the runway and its 60 metres paved clearway onto muddy ground and reaching a maximum speed of around 70 knots before coming to complete stop about 360 meters beyond the end of the runway resting on its left wing and the right main gear, the nose and left landing gear having been forced into retraction by ground impact during the excursion.

Landing Performance for the aircraft as loaded to an ELW of 54 tonnes and in the prevailing conditions was reviewed and it was found that the LDR with touchdown at 130 knots on a dry runway was 1500 metres - or 1700 metres on a wet runway. The Investigation was not able to ascertain the extent of any water on the runway surface at the time of the landing but noted that “as it was the rainy season the runway might (have been) contaminated due to rainfall” but noted that FDR data showed that there had been no activation of the landing gear anti skid units during the landing roll. 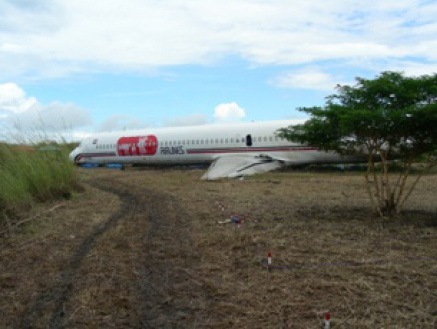 The Investigation noted that the dual hydraulic system was configured so that the right hand system provided power for rudder and landing gear operation while the left hand system provided power for the elevator augmenter with all other hydraulically powered services served by both systems which were as usual in hydraulic system design, linked by a Power Transfer Unit (PTU) which automatically shuts down in the event of low contents in one system. Examination of the aircraft after the accident found that whilst the right hydraulic system had been functioning normally, the left hydraulic reservoir was empty, which was attributed to a breach in a hydraulic fluid return pipe in the left hand system which had resulted in this system loosing its fluid to atmosphere at some point en route prior to the accident landing “without the pilots noticing”. The effect of this had then been the unexpected retraction of the left wing spoilers after landing which would have occurred as soon as hydraulic accumulator pressure had been exhausted in the few seconds after touch down. However the resulting tendency of the aircraft to veer to the right due to the asymmetric deceleration effect of the still-extended right wing extended spoilers was successfully counteracted by the appropriate use of the rudder which operates only from the right hydraulic system.

The breach in the return pipe was attributed - without stated supporting evidence being discussed - to “severe tightening” during maintenance activity some time previously. It was considered that there may have been opportunity for the crew to have detected abnormal system status during their pre or in flight checks and thus proactively reviewed the likely consequences of planning to conduct the landing as if the aircraft hydraulic systems were functioning normally.

FDR data showed that in association with the automatic stowage of the left hand wing spoilers, the pre-selected auto brake had not initially produced any braking action and that in the absence of normal hydraulic pressure, subsequent pilot selected braking action had been intermittent, possibly due to a defect within the hydraulic system PTU and/or to the PTU having isolated the left hand brake system because of the loss of all left hand hydraulic system fluid.

During the second selection of the thrust reversers, the effect of this system malfunction would have been that the right hand hydraulic system would have fully deployed the right engine reverser but the almost stowed left reverser would have remained in its almost-stowed position so that aircraft speed increased due to thrust from the left engine.

The Investigation noted that just over a year earlier, in May 2005, the same aircraft had also overrun the runway during landing at Poznan, Poland “which might be for the same reason” but noted that no response had been received from the Polish authorities in reply to a request for information.

The Investigation formally determined that the ‘Main Reason’ for accident overrun was the “late touch down point (on the) down-sloped runway, (the) reduced braking effect and the (unexpected) lateral acceleration that puzzled the aircraft commander and (led to his action) to counteract (it).”

It was also determined that a Contributory Factor was “poor maintenance and improper (pre) flight and landing checks”.

The Final Report of the Investigation was not published until June 2013.