On 20 February 2018, a Boeing MD-83 attempting a night landing at Port Harcourt during a thunderstorm and heavy rain touched down well beyond the touchdown zone and departed the side of the runway near its end before continuing 300 metres beyond it. The Investigation found that a soft touchdown had occurred with 80% of the runway behind the aircraft and a communications failure on short final meant a wind velocity change just before landing leading to a tailwind component of almost 20 knots was unknown to the crew who had not recognised the need for a go around.

On 20 February 2018, a Boeing MD-83 (5N-SRI) being operated by Dana Airlines on a scheduled domestic passenger flight from Abuja to Port Harcourt as DAN36A3 veered off the side of the landing runway after touching down at night in reduced runway visibility during heavy rain and ended up 300 metres beyond the end of the runway. None of the 49 occupants were injured in the accident or the subsequent emergency evacuation but damage to the aircraft was substantial and there was impact damage to ground lighting and navigation aids. 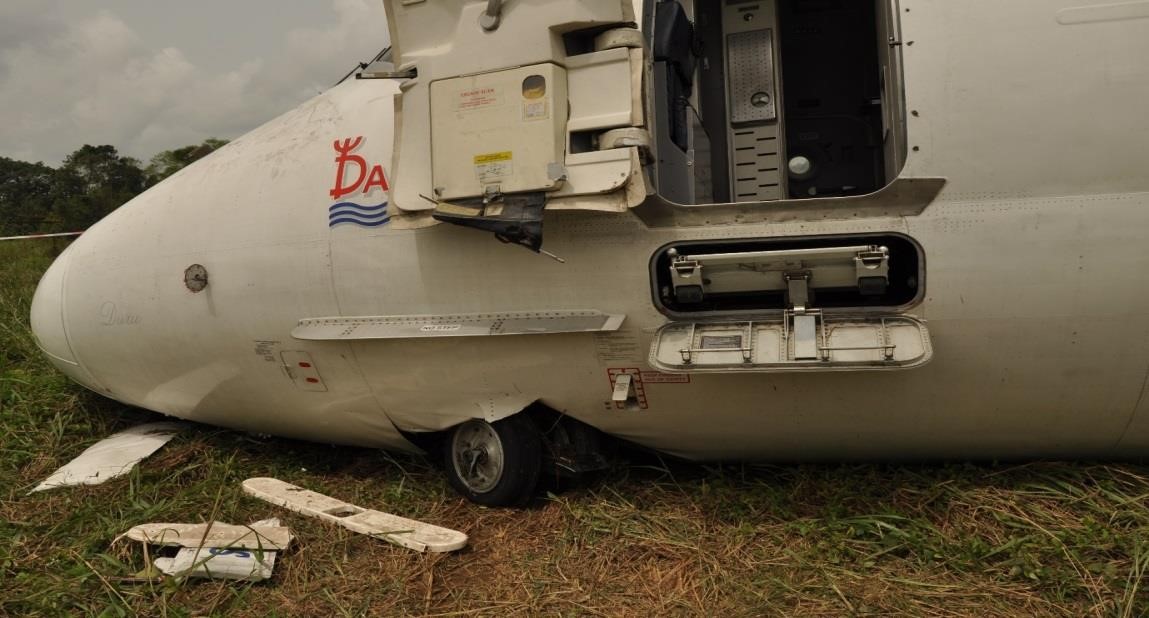 The front of the aircraft showing the collapsed nose landing gear leg and the exit through which all occupants evacuate. [Reproduced from the Official Report]

The AFRS arrived whilst the evacuation was taking place and it was completed without any injuries. As well as “substantial” damage to the aircraft, some runway 03 approach lights were broken as was the ILS LOC antenna and the “ILS light stand”.

A calculation of the landing performance for the accident flight with the aircraft as configured was made and it confirmed that made by the crew. It showed that even in the environmental conditions which had been present (including a 19 knot tail wind component) and assuming a runway with at least the minimum required surface friction, if the aircraft had crossed the threshold at 50 feet agl and then touched down firmly in the TDZ, that it should have come to a stop 2,070 metres past the threshold leaving 930 metres of runway ahead of the aircraft.

The pilots stated that “the runway had experienced recent rain before arrival, and after touchdown looked and felt contaminated with flood of water that did not drain well”. In the usual absence of any hard evidence as to what the water depth might actually have been, the possible effect of the condition of the runway surface was examined and it was noted that although the responsible authority, the Federal Airport Authority of Nigeria (FAAN), claimed that necessary monitoring and maintenance had been taking place, they had not provided any detail on this and stated only that it was “supervised by the airport authorities and conducted by field engineers and other airfield operations personnel”.

The Investigation found that runway friction testing at Port Harcourt was carried out by a contractor and noted that a 2018 CAA Audit of the airport had recorded that “the FAAN claimed to have conducted the last friction test on runways 03/21 in 2012” but did not provide any documentary evidence to support this claim. It was found that “there was no record of any corrective maintenance action on the runway” prior to the accident although the most recent validation of the extent of rubber deposits on runways 03/21 as “satisfactory” had been made in December 2017.

During their initial inspection of the flight deck, the Investigation Team discovered that two overhead panel CBs were tripped, those protecting the anti skid test and COM 2 which was taken to indicate that both were therefore likely to have been inoperative during the landing. The tripped COM 2 CB would have explained the First Officer’s inability to communicate with TWR but no evidence was found as to why it had tripped. The absence of anti skid on a rain-soaked runway was likely to have contributed to the difficulty of stopping the aircraft on what remained of the runway after touchdown and it was surmised that since the anti skid self-test operates automatically when the main landing gear extends, this is when it had most likely occurred.

The loss of directional control near to the end of the runway was noted as having been potentially a consequence of viscous aquaplaning which “often occurs […] where rubber deposits are present, usually in the touchdown area where (even) a thin water film can significantly reduce the coefficient of friction”. In such circumstances, it was observed that “the effects of even minor differential manual braking are likely to be greater” and that any reduction in nose landing gear wheel adhesion “directly limits both steering input options and the usual directionally-stabilising effect of the nose landing gear”. It was also noted that “transverse scuff marks found on some of the tyres also indicated that they had been subjected to a skid” and that the offset between these marks on the nose gear and main gear confirmed the aircraft had been in a slight yaw to the left as it left the runway centreline.

Relevant guidance on approach and landing in the MD80 FCOM and the Dana Airlines OM Part ‘B’ was reviewed and it was concluded that the conduct of the final stages of the approach and the landing in the observable conditions had been contrary to a range of applicable SOPs. It was also noted that and the accident had occurred in the presence of ineffective CRM in a situation where the Captain had been overloaded and the very inexperienced First Officer was a less effective PM than greater experience might have facilitated. However, it was also observed that “in the absence of information and training about un-grooved and wet/contaminated runways, there is a risk that the flight crew will not carry out the appropriate landing techniques under these conditions”.

Overall, it was considered likely that the flight crew had not considered that the situation warranted a go around, had “believed that the entire approach was stabilised” and with the runway in sight had simply “disregarded the presence of high winds and the other deteriorating metrological conditions”.

The Investigation took the view that on encountering a situation which required the flight crew to “adapt to rapidly changing weather conditions”, a series of active and latent failures related to flight management which had been “multiple and interactive” could be identified.

Latent failures were identified as including:

The Cause of the Accident was determined as “an underestimation of the degradation of weather conditions (heavy rain, visibility and strong wind on short final and landing) and the failure by the crew to initiate a missed approach which was not consistent with the company’s SOP”.

The Final Report of the Investigation was published on 25 April 2019.