On 16 August 2007, during a non-precision approach to RWY34 at Dublin airport, the flight crew of a MD83 misidentified the lights of a 16-storey hotel at Santry Cross as those of the runway approach lighting system. The aircraft deviated to the left of the approach course and descended below the Minimum Descent Altitude (MDA) without proper visual recognition of the runway in use. A go-around was initiated as soon as ATC corrective clearance was issued.

On 16 August 2007, a MCDONNELL DOUGLAS MD-83 departed Lisbon with the Co-pilot as Pilot Flying (PF) on a scheduled passenger flight FLT344E to Dublin, Ireland. The flight progressed without incident until commencing its approach to Dublin Airport. The approach was made at night; the weather and visibility were good. As scheduled maintenance on the main runway (RWY 10-28) was under way, RWY 34 was in use for landing. The flight was cleared by Air Traffic Control (ATC) to carry out a non-precision approach to RWY 34. During the approach, at approximately 5 nm from touchdown, the aircraft began to deviate left of the approach course. This deviation was due to the Flight Crew mis-identifying the lights of a 16-storey hotel at Santry Cross as those of the runway approach lighting system on RWY 34 (See: Figure 1). The aircraft descended below the Minimum Descent Altitude (MDA) without proper visual recognition of the runway in use, and descended to an altitude of 580 ft above mean sea level (AMSL) before ATC issuing instruction for right turn and climb. At the point the go-around commenced, the aircraft was approximately 1,700 ft from the building and 200 ft above it. The aircraft subsequently landed without further incident after vectoring for Instrument Landing System (ILS) approach for RWY 16. 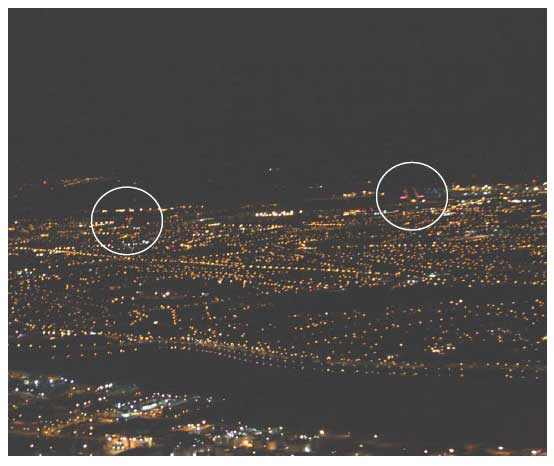 Figure 1. View of the RWY 34 approach at 5.5 NM to touchdown, with the Hotel building at Santry Cross indicated on the left of the photograph.Source: AAIU Report 2009-010

The investigation of the Serious Incident came to the following probable cause:

The decision of the Flight Crew, to continue an approach using visual cues alone, having mis-identified the lights of a building with the approach lights of the landing runway.

The recommendations comprise comprehensive review of the CRM training of the operator and airport control tower manning level examination by IAA. Furthermore, the IAA, when considering the type and positioning of warning lights specified for an obstacle in the vicinity of an aerodrome, should take account of the potential for confusion by pilots of such lights with visual navigation aids at the aerodrome.