On 8 March 2017, a Boeing MD83 departing Ypsilanti could not be rotated and the takeoff had to be rejected from above V1. The high speed overrun which followed substantially damaged the aircraft but evacuation was successful. The Investigation found that the right elevator had been locked in a trailing-edge-down position as a result of damage caused to the aircraft by high winds whilst it was parked unoccupied for two days prior to the takeoff. It was noted that on an aircraft with control tab initiated elevator movement, this condition was undetectable during prevailing pre flight system inspection or checks.

On 8 March 2017, a Boeing MD83 (N786TW) being operated by Ameristar Charters on a non-scheduled passenger flight from Ypsilanti to Washington Dulles being flown by a type rated Captain undergoing supervised type-variant differences training could not be rotated during a daylight takeoff in normal visibility and the unavoidable high speed rejected takeoff led to an overrun of 350 metres. An emergency evacuation of the 116 occupants was successfully accomplished with just one passenger sustaining a minor injury but the damage to the aircraft was substantial. 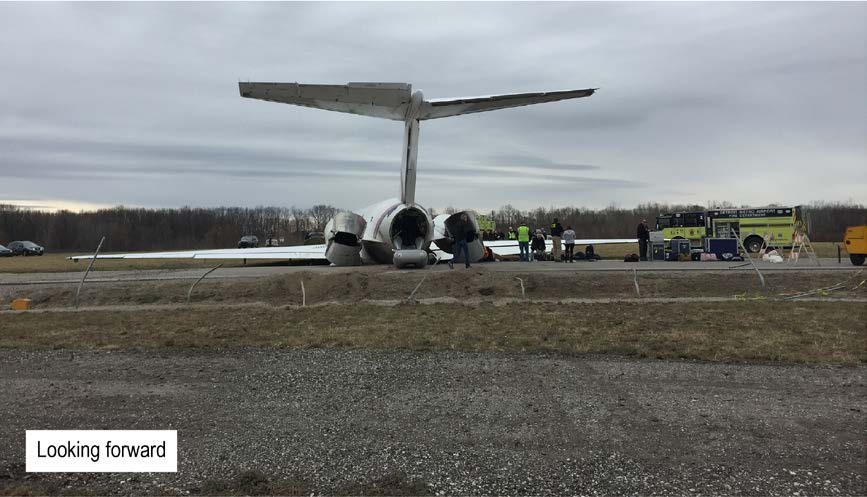 The aircraft in its final stopping position showing the breached perimeter fence and the slightly elevated roadway just beyond it. [Reproduced from the Official Report]

It was established that after being parked at Ypsilanti for two days prior to the accident takeoff, the aircraft crew had been obliged to follow their Company’s procedures for non-towered airports for their departure after the ATC TWR service had been withdrawn following an interruption to electrical power supplies caused by high winds. The Captain under supervision carried out the pre flight external check with no untoward findings and the two pilots agreed the applicable takeoff speeds V1 / Vr / V2 as 139 / 142 / 150 KIAS respectively. Given the gusty conditions, wind forecast to be from 250° at 32-48 knots, it was agreed that for the takeoff from the 2300 metre-long runway 23L, rotation would be delayed. Control checks whilst taxiing out were normal and the takeoff was commenced but when Vr was called, the PF reported having been unable to get the expected pitch up response to his aft movement of the control column. In response to the reject call, the supervising pilot was recorded as responding “no, not above…” and then “…don’t abort above V1 like that,” with the Captain replying “it wasn’t flying” but thereafter supported rejected takeoff procedure being followed with both pilots applying maximum braking. FDR data showed that the maximum speed reached was 173 KCAS and integrated groundspeed data showed that brake application to reject the takeoff had commenced with about 480 metres of runway remaining.

The aircraft reached the end of the runway, continued across the 61 metres paved blast pad and, having left this surface at 100 KCAS, then began to gently deviate to the left of the extended centreline across the grassed part of the runway safety area before exiting the airport perimeter through a fence and crossing a slightly elevated road and coming to a stop just beyond it with the tail resting on the road - see the reconstruction of the ground track followed below. 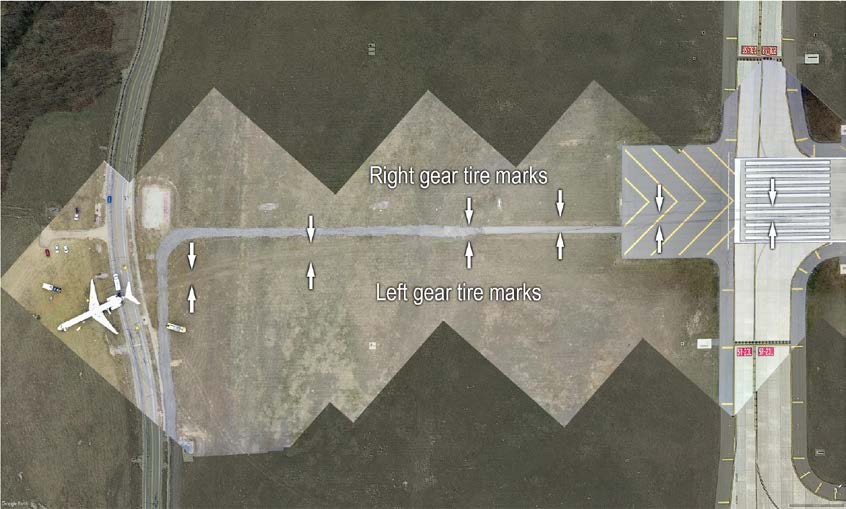 The aircraft ground track after leaving the runway. [Reproduced from the Official Report]

An emergency evacuation was immediately ordered by the Check Pilot and was accomplished using just four of the eight emergency exits. Two of the 4 overwing exits were not used, the evacuation slide at door 1R did not inflate and the tailcone exit door could not be opened fully because a seatbelt buckle “became wedged under it”. By the time the seatbelt buckle had been removed by one of the cabin crew, everyone had evacuated through the other available exits.

Damage to the aircraft was considerable and included all the landing gear assemblies being “bent, fractured and displaced aft” and lower fuselage damage consequent on gear collapse with lower skin panel assemblies showing severe buckling and deformation with some missing sections and damaged internal structure evident in places.

The elevators on this aircraft type are primarily moved indirectly by the action of the control column on the control tabs and there is no direct link between the movement of the control column and the position of the elevators. The elevators are attached to the rear spar of the horizontal stabiliser by hinges and equipped with control, geared and anti-float tabs at their trailing edges. Elevator travel is possible in the range 27° up to 16.5° down limited in each case by mechanical stops. Each elevator also has a damper to prevent elevator flutter during flight and to dampen rapid movement of the elevator during gusting winds when the aircraft is on the ground. This means that when the aircraft is parked, each elevator is free to move independently if acted upon by an external force such as the wind or during maintenance activity and there is no gust lock and no connection between the left and right elevators.

Further examination of the aircraft showed that control column movement produced the expected response in the control tab positions although structural damage caused during the overrun was preventing the cables linking the two from moving smoothly. However, inspection of the elevators then found that the actuating mechanism controlling the movement of the right elevator had been forced beyond its normal range of travel and had become locked in an over-centre position thus effectively jamming the elevator in a full trailing edge down position so that it would not respond to any control tab movement. The possible effect of gusting winds on this elevator mechanism whilst the aircraft had been on the ground prior to the accident flight became the focus of attention.

Airworthiness standards applicable at the time of the accident were found to require that “flight control systems and surfaces of transport-category airplanes must be designed for the limit loads generated when the airplane is subjected to a 65 knot horizontal ground gust from any direction while parked and taxiing”. The aircraft type involved had, as the Douglas DC-9, been originally certified with a ground gust limit load equivalent to approximately 52 knots, and revised to 65 knots in 1997. Boeing advised the Investigation that they had not received any previous notifications of an elevator jam on an aircraft exposed to ground gusts above this revised limit.

No evidence that the prevailing wind once the aircraft had been powered up for the accident departure had been outside the certification limits was found and so available information on the wind conditions which had prevailed whilst the accident aircraft had been parked in the lee of a very large hanger at Ypsilanti was assembled. The open space recorded wind speeds were found to be well within the 65 knot ground gust limit load but it was suspected that this may not have been true of air movements around the aircraft tailplane because of localised turbulence generated in the lee of the adjacent large hangar. A virtual reality 3-D scale model of the hangar structure and its environs in relation to the position and profile of the parked aircraft was therefore created using data gathered using a sUAS and this and the available wind data were then passed to Boeing in order to populate a wind simulation model based on the principles of computational fluid dynamics (CFD). The results of this CFD modelling were then applied to a test rig of the MD83 horizontal stabiliser and elevator system and it was possible to show that wind eddy effects were indeed likely to have led to vertical wind forces in excess of the type certification limit being intermittently exerted on the right hand elevator (only) and that these would have been capable of causing the damage found to its actuator mechanism which had led to it being locked trailing edge down.

In the course of the main thrust of the Investigation, other safety matters considered included the following:

As a result of the Investigation, six Safety Issues were formally identified as follows:

The Probable Cause of the accident was determined to be “the jammed condition of the airplane’s right elevator, which resulted from exposure to localized, dynamic wind while the airplane was parked and rendered the airplane unable to rotate during takeoff”.

It was additionally found that the survivability of the accident had been aided by:

Safety Action taken whilst the Investigation was in progress was noted as having included but not necessarily been limited to the following:

A total of six Safety Recommendations were made as a result of the Investigation as follows:

In accordance with the ICAO guidance for reporting of accident investigations under the heading “effective new investigation techniques” the use of an sUAS to obtain the imagery necessary to produce an accurate, photogrammetric 3-D model of the hangar, other buildings, and terrain near the area where the aircraft had been parked was highlighted.

The Final Report of the Investigation was adopted on 14 February 2019 and published on 7 March 2019.