On 21 January 2019, a Piper PA46-310P en-route north northwest of Guernsey was reported missing and subsequently confirmed to have broken up in flight during an uncontrolled descent. The Investigation found that neither the pilot nor the aircraft involved were able to be used for commercial passenger flight operations but also found that although the direct cause of loss of control was unproven, it was most likely the consequence of carbon monoxide poisoning originating from an exhaust system leak. The safety implications arising from operation of private flights for commercial passenger transport purposes contrary to regulatory requirements were also highlighted.

On 21 January 2019, a privately operated Piper PA46-310P (N246DB) conducting a private international passenger flight from Nantes to Cardiff at night on a VFR flight plan began manoeuvring whilst in the cruise to maintain VMC. It then suddenly began to descending steeply and at high speed before disappearing from radar altogether in a position close to where the wreckage of the aircraft was subsequently located on the seabed, a discovery which confirmed breakup of the airframe prior to impact and fatal injuries to the two occupants.

The UK Air Accidents Investigation Branch (AAIB) became aware that the aircraft had gone missing approximately an hour after this had happened. Since the accident occurred in international waters and involved a USA-registered aircraft, the responsibility for the conduct of an independent accident investigation lay with the NTSB as the appropriate agency of the State of Registration of the aircraft. However, as provided for under ICAO Annex 13, the State of Registration may, by mutual agreement with another Member State, delegate the investigation to them. On the day after the accident had occurred and in anticipation that an accident investigation would be required, the NTSB delegated responsibility for the investigation to the State of the Operator, in this case the UK as represented by the AAIB who immediately opened a formal Investigation.

The 59 year-old pilot had a total of approximately 3,500 hours flying experience, of which a “large percentage” had been accumulated whilst dropping parachutists from single and twin engined aircraft and had “little experience of flying in IMC or operating under IFR”.

At the time of the accident, he held a UK-issued EASA PPL (Private Pilot License) and a FAA PPL issued on the basis of the former. His EASA Licence did not include an IR (Instrument Rating) or a Night Rating although his records indicated that he had flown several flights at night over the preceding 12 months. This Licence was in any case found to have expired in November 2018 with no evidence that it had since been renewed. He had undertaken EASA ‘differences training’ to enable him to fly the PA-46 but had been incorrectly authorised to fly the type both by day and at night. It was not established whether he had undertaken the FAA’s equivalent ‘complex aircraft training’ for the PA-46 although his basic FAA PPL was current at the time of the accident as he had completed the required ‘Flight Review’ with an authorised instructor or examiner within the previous 24 months.

It was found that the pilot had begun flying the accident aircraft seven months prior to the accident and had then flown it and another similar type regularly around the UK and Europe. His own records showed that despite not being appropriately licensed, “he had been paid a fee for flights on numerous occasions” with other evidence showing that he was to be paid a fee for the accident flight.

It was noted that the pilot was unable to communicate verbally with the passenger because they did not share fluency in any common language. There was no written safety brief on board the aircraft in any of the languages that the passenger spoke and witnesses described the pilot and passenger communicating through hand gestures.

The same pilot had flown the same passenger in the same aircraft from Cardiff to Nantes Airport two days prior to the accident with a return flight already scheduled. On the day of the accident, the pilot arrived at Nantes airport in the early afternoon to refuel and prepare the aircraft, which had remained parked since arriving there, for the return flight. The single passenger arrived in the early evening and half an hour later, the flight taxied for departure on a VFR Flight Plan which indicated an intended cruise altitude of 6000 feet. Takeoff from runway 03 at Nantes occurred soon afterwards and clearance to climb to and maintain FL 055 was given for the direct track to Cardiff.

When the aircraft was about 20 nm south of Jersey, the flight was transferred to Jersey ATC  and on initial contact was cleared to enter controlled airspace and continue at FL 055 with the pilot asked to advise if unable to maintain VMC so that any deviations could be coordinated with other traffic.  A couple of minutes later, the controller asked the pilot to check that aircraft altimeter pressure setting was correctly set to 1013 hPa because SSR data was indicating FL 053. This was acknowledged and the aircraft then climbed to FL055.

As the flight passed about 11 nm west of Jersey, the pilot requested clearance to descend to “maintain VMC” and was cleared to descend to FL 050 and advise if further descent was required. The aircraft began to descend as cleared whilst also making a right turn followed by a left turn to fly parallel to (and about 1½ nm east of) the planned track whilst overhead Guernsey.  When this deviation was queried by ATC, the pilot responded with “... just avoided a patch there but back on heading five thousand feet”. 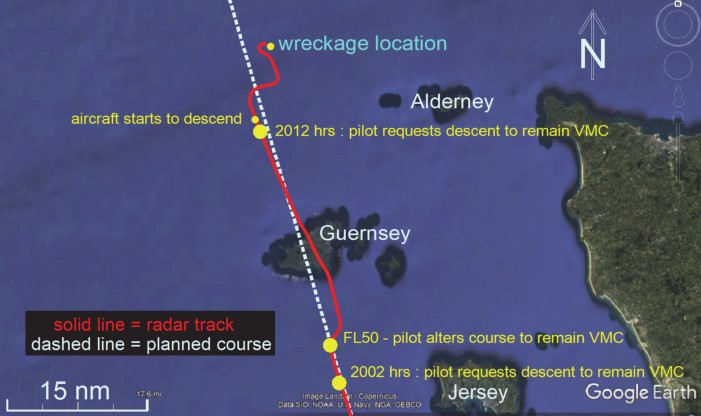 The final stages of the radar-recorded ground track. [Reproduced from the Official Report]

At 2012, ten minutes after the earlier request to descend to maintain VMC, a further request to manoeuvre to remain VMC was made at a position - 11 nm north of Guernsey - close to where recorded rainfall radar picture timed three minutes later (see the illustration below) showed that without such manoeuvring, the flight track would have been likely, as indicated in the illustration, to penetrate heavy showers and/or the cloud associated with them. ATC responded with a clearance to descend at the pilot’s discretion and the pilot was given the Jersey QNH. This response was acknowledged with what became the last radio communication received from the flight. 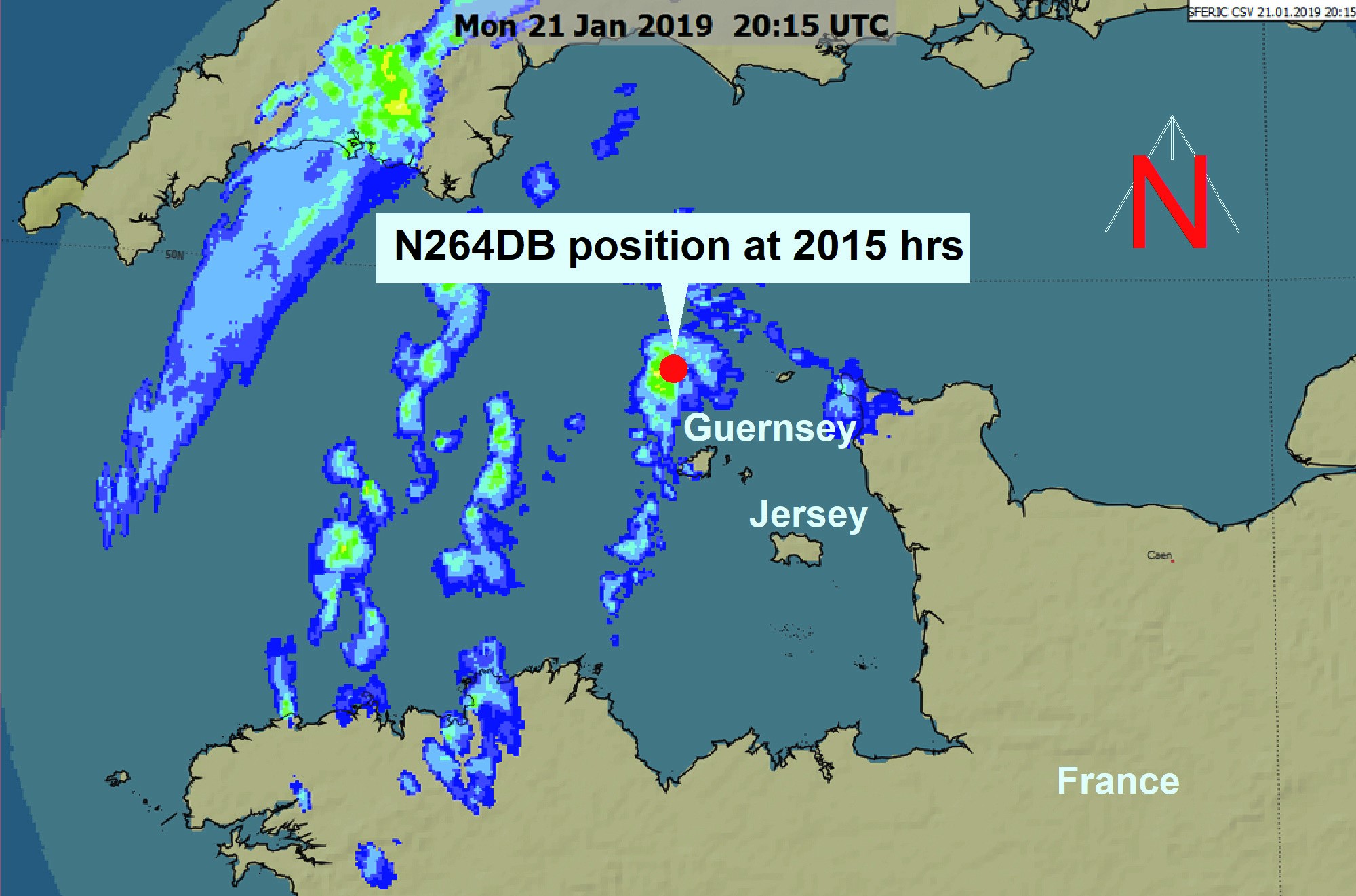 The weather radar picture just before the final track reversal and very steep terminal descent. [Reproduced from the Official Report]

Thereafter, the aircraft turned right and began to manoeuvre somewhat erratically in respect of both heading and altitude whilst remaining in the general vicinity of 4000 feet. During these turns, the flight path was assessed to have been “unstable and inconsistent with normal cruise flight or with use of the AP". After two minutes of generally northerly progress, a right turn of approximately 180° was recorded during which the aircraft began to descend from a recorded 4,100 feet. As it descended through approximately 2,700 feet, the angle of bank was approximately 90° and the airspeed was approximately 235 KIAS. There was then “an abrupt nose-up pitch input when the airspeed was at least 100 knots above VA” (the speed above which full or abrupt control movements are not permitted). During the subsequent pull-up, it was concluded that “the aerodynamic loads would have exceeded design limits and caused the structural failure of the elevator and horizontal stabiliser, followed by the structural failure of both wings at the splice joints”.

Since this abrupt pull-up just before the aircraft broke up would have required the control wheel to be pulled aft and the passenger was not seated next to the pilot, it was concluded that at this point, the pilot probably still had “some level of function”.

The available evidence indicated that the fuselage had struck the sea surface in “an inverted, left wing low, nose-high attitude”, an impact that was not survivable. Although the aircraft was fitted with an ELT, this was not designed to work underwater and the extensively damaged wreckage was not located until two weeks later at a depth of just over 220 feet located within 100 metres of the final primary and secondary radar points.

The pilot’s body was not recovered but the passenger’s body was and during post mortem testing showed a blood carboxyhaemoglobin (COHb) level of 58% which, despite the time underwater, the pathologist concerned considered was still a reliable result and indicated that “he would almost certainly have been ‘deeply unconscious’ at impact".  As the passenger and pilot were sitting in the same cabin, the pathologist “considered it likely that the pilot would have been exposed to similar levels of Carbon Monoxide as the passenger and observed that similar levels of COHb in the pilot’s blood would have been expected to render him unable to fly an aircraft”. Although the extent to which the pilot was affected by Carbon Monoxide (CO) poisoning could not be determined, it was considered very likely that his ability to control the aircraft could have been progressively impaired during the later stages of the flight “thereby significantly increasing the likelihood that control would be lost”.

It was concluded that the most likely reason for CO fumes to have entered the cabin would have been “a failure of the part of the exhaust tailpipe containing the heater muffler” which would have allowed exhaust gas to mix with the ram air and thus enter the cabin through the air conditioning system. The condition of the wreckage precluded any assessment of such a leak but it was noted that the complete exhaust system had been visually inspected during an annual maintenance check completed only 11 flying hours before the accident. However, it was noted that in a previous accident, a causally-implicated exhaust gas heater muffler had been found to have failed only six flying hours after a similar inspection.

It was found that there was no FAA requirement for a pressure test of the heater muffler to be carried out in the 100-hour / Annual maintenance schedule and it also did not directly reference Lycoming guidance on how to examine the exhaust system. However, it was also recognised that “in-service inspections of exhaust systems do not eliminate the risk of CO poisoning and that whilst safety regulators advise pilots to do so, there is no requirement for CO detectors to be carried on piston engined aircraft".

Beyond the issue of the integrity of the exhaust system, no evidence of any relevant lack of pre flight aircraft airworthiness was found, although the AP and FD had both been “diagnosed as having an intermittent fault and should have been placarded as inoperative”. Faults with the stall warning system and the brakes and an oil leak which were reported by the pilot from Nantes after arriving there, were not considered to have been relevant to accident causation.

There was no evidence to suggest the pilot was not fit and healthy prior to the flight or that he was not well-rested. However, it was considered likely that he would have “felt some pressure to complete the return leg of the flight” even though it would be at night and would take place in what, from a VFR perspective, would be relatively poor weather.

Three Causal Factors for the accident were identified as follows:

Safety Action taken or promised as a result of the Accident was noted as having included the following:

Five Safety Recommendations were made as a result of this Investigation as follows:

The Final Report was published on 13 March 2020. Two interim ‘Special Bulletins’ had been issued whilst the Investigation was in progress, on 25 February 2019 and on 14 August 2019.